Tales from the Quarter: Returning Home

Can you really go home again? That old adage about never being able to return has some truth in it—at least for me. Revisiting a place, be it my hometown, an old neighborhood, place of work, or a beloved business we once owned, always comes with great emotions. Whether I left such places willingly or by duress, there is a melancholy that hits me when returning. But sometimes an immersion is necessary and your new fit back depends on whether you rail against or revel in it. And most importantly, you have to accept that you are never going to replicate the past; instead, you are creating a new situation, life, on vaguely familiar turf.

So there I was returning to my former home, my old stomping grounds—the Quarters. I was on my way to a new job at one of the few remaining family owned and operated small businesses and couldn't be more delighted with my good fortune until we hit Decatur Street traffic. I was suddenly having "buyer's remorse." Did I really feel up to a return to the madness of the French Quarter on a busy tourist day? This was one of those first full-fledged days of "welcome back to post COVID life" with its throngs of people resembling a prison break, dressed in Bermuda shorts, t-shirts, and flip-flops. Too many people to visually digest, much less walk along with. Had I made a mistake? Was I done with crowds and doomed to shriek inside my head every time our Quarter is blessed with tourists eager to spend their money and give our local economy a much-needed boost? Had I changed too much from being a Quarterite to a neighborhood gal with the chirping of birds preferred over amped-up bipeds?

My "home" for many years was the French Quarter, or as many fondly call her, The Quarters. When I first moved to New Orleans, I chose the Quarter and soon immersed myself in this hamlet, this world, this small city within the city. The long-time Quarterites back then would lament that it had changed so much, too much, but I don't think they nor I knew just how much more it would weaken as a neighborhood. Oh sure, some lovely changes occurred (to my way of thinking) like the Woldenberg Park and the access to the river. Some buildings were saved, some tour buses rerouted, and the proliferation of tacky t-shirt shops were reigned in. Yet as the years passed, the tacky t-shirt entrepreneurs simply upped their game and gave us high-end "any mall, any town" gift shops with piped-in Cajun music to lure in the tourists. Meanwhile as you look up, you see the neglected third and fourth floors of these historic buildings and wonder how these treasures are allowed to rot. All the while the street-level unique and one-of-a-kind shops continue to disappear. Major kudos to those locally owned and family run businesses (I have the privilege of working for one such family) that have remained loyal to The Quarters and congrats to the new culinary treasures that reflect the entrepreneurial spirit of creative endeavors. Hopefully these places will become the backbone of what must remain a meaningful, living and breathing, historical enclave able to generate new memories and stories.

As I write this, I realize my loyalty and love for this neighborhood is still strong, yet I do feel like a fish out of water, a visitor only. The Quarters is truly its own microcosm, a mini-metropolis within New Orleans. And if it becomes your home, then it will be imprinted upon you or you upon it. The Quarters became my home and was as personal to me as my hometown; in fact more so because I had chosen it myself. So when I moved away, I felt like I was leaving behind my New Orleans birthplace, my family. My departure came in two-parts. First part was a willing move from our Quarter apartment to a neighborhood close by. Yet we still felt imbedded since Husband and I continued to have our beloved shop and side jobs in the French Quarter, thus allowing us to remain a part of the fabric. But the shop's landlord forced us out (extreme rent increase; sadly a common thing) and our restaurant gig ended when the owners retired (no shame, no blame). We had considered ourselves Quarterites by day and neighborhood folks with a yard by night. Now our Quarterite citizenship was gone…or so it felt.

Our shop moved and, for the next five years, I was managing it seven days a week while Husband worked as a tour guide to support the shop (and us). I wouldn't give up a single day of our business but I was tethered to it, and the Quarter became a mere memory. On rare occasions when visiting the Quarter, I felt overwhelmed and like I had lost my "sea legs" for navigating the crowds. Actually, the pandemic helped me to slowly regain my footing as the Quarter became a bit of a ghost town—eerie and sad yet softer and more yielding to my pace. Still the sense of returning to a former home where I was now a stranger nagged at me. Then one day recently, a former work buddy from 20-odd years ago hollered to me at Jackson Square. "Hey Debbie, been a minute since I've seen ya. You still have that shop on Toulouse?" Damn, for him, time hadn't passed very far. In his mind, I still had my business and I didn't look as old as I feel! He thought I had never left. Perhaps a part of me never did. Maybe I was home again. After all, isn't that where the heart is?

Tales from the Quarter: Rituals of Respect

August 8th, The New Orleans Jazz and Heritage Festival had to make the difficult decision to cancel the October Jazz Fest. I believe this was a wise move but painful for so many. Jazz Fest generates approximately $400 million dollars for our economy in New Orleans. And there is... 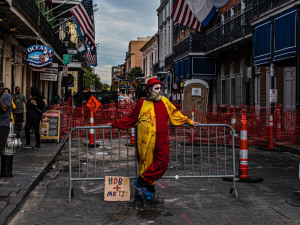 Sitting outside Old Road Coffee Shop on a not too frequent visit, waiting for Deb, smiling as a woman at the next table snaps a photograph of my car with the mannequin in the back seat. I've already avoided a morning drunk that just wants to "ask me a question." Deb arrives and who should emerge from another car to get a cup but the former mayor; conversation ensues. Wellman the artist arrives, down on his luck as usual (pieces in the... 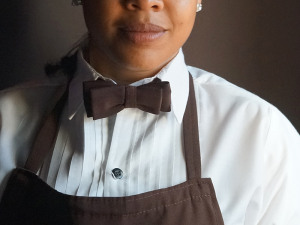 Tales from the Quarter: Proud to Serve

Finally I would find solidarity within the ranks of fellow Blacks and Whites—no, this had nothing to do with racial harmony; it simply was the standard uniform of polyester and cotton blends. Black trousers (or skirt) and a white shirt, often tuxedo style, and, of course, a black bow tie. We were referenced by our uniform and its old school monochromatic black-and-white. Server, waiter, waitress, also served as titles. This was 1989, I...