How to put a king cake cocktail into words? Cult favorite dessert meets alcoholic beverage, and hijinks ensue. Sugar-high meets boozy buzz, soundtrack by Trent Reznor and Atticus Ross. Words can't contain it. This year, cocktails of all kinds—from daiquiris to bourbon milk punches to martinis—are putting on their Mardi Gras garb and passing themselves off as the mischievous sibling of king cakes. Here are five places that are serving standout recipes for the season.

Gris-Gris opened in August 2018. Ever since then, they've been racking up Restaurant of the Year titles all over the place. It's no wonder why. Whether you dine at their Magazine Street location for brunch, lunch, or dinner, they'll have something you'll love (even if you're sticking to Ochsner Health System's Eat Fit NOLA plan). In the drinks department are king cake daiquiris. Sip on a seasonal spin of the favorite frozen drink, available until Mardi Gras Day. Made with Deep Eddy Vodka, Evangeline Praline Liquor, dairy-free vanilla soft serve, cinnamon, and seasonal spices, the cocktail is available in 16-ounce single servings ($9) and half-gallon servings for die-hard fans ($30). Because this is the kind of seasonal drink that generates an extreme fandom. 1800 Magazine St., (504) 272-0241, grisgrisnola.com

The seasonal menus at Reginelli's are always a sight for sore eyes. This year, for Mardi Gras, Reggie's has a Bayou Eggplant (the most intriguing nightshade) dish that sounds de-light-ful and a king cake cocktail that sounds downright dangerous. "This cocktail will make you want to say 'Laissez les bon temps rouler!" says the menu. We take that seriously. How could we not? The drink is composed of Fireball, Rumchata, vanilla soy milk, and cinnamon, topped off with whipped cream and cinnamon crumbles ($9). Multiple Locations, reginellis.com

Dickie Brennan's Bourbon House is staying true to its roots while also getting a little wild for the season with their king cake bevvy. Though lesser known than the Sazerac, Hurricane, or even Hand Grenade, the bourbon milk punch is a classic New Orleans drink. The ingenious mixologists at Bourbon House took the underrated cocktail and dressed it up for Mardi Gras. A combination of homemade vanilla ice cream, cinnamon, orange, orgeat syrup, and local NOLA rum. Served frozen, it's the ideal desserty drink to enjoy after a meal. 144 Bourbon St., (504) 522-0111, bourbonhouse.com

Louisiana is drive-thru daiquiris. It's late nights stumbling into storefronts where the walls are lined with levers that lead to flavors like Crawgator and Electric Lemonade. It's those places where the ceilings are festooned with LED lights shaped like icicles or flames (or both) and the music is heard loud and clear from outside. As New Orleans Original Daiquiris legend has it, the phenomenon wouldn't exist if David Briggs Jr. hadn't had the idea to open up a daiquiri empire in 1983. Of course, it wasn't an empire back then. It was a shop in Hammond. And now, look at them. They're offering you a Mardi Gras Mash prepared with bourbon, triple sec, and tropical fruit punch, AND a king cake daiq with king cake vodka. "Tastes like a cinnamon roll," says the staff, in case you ever had a doubt. Multiple Locations, nolaoriginal.com

Just by name, you know the Velvet Cactus is gonna be the funky Mexican restaurant of your technicolor dreams. Their food is as delicious as their vibe. If you can't stop admiring the art on their walls, just know that it's all by local artists and available for sale. For the season, they're offering up a king cake martini made with king cake vodka, sweet amaretto, and a touch of half and half, dusted with Mardi Gras magic (gold, green, and purple sugar crystals, but also magic). 6300 Argonne Blvd., (504) 301-2083, thevelvetcactus.com

Enjoy the hot New Orleans summer by sitting back, relaxing, and enjoying a glass of wine. With Copper Vine's new private wine tasting experience and private wine dinners, a guided tour of the vineyards is brought directly to your table in a historic building in the heart of... 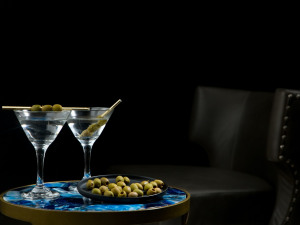 Although James Bond himself asks for a martini shaken, most prefer to go the traditional route and enjoy themselves a martini stirred. However you prefer a martini, be sure to sip on one June 19, which is National Martini Day. This classic gin and vermouth cocktail is a staple at many New Orleans restaurants, including the five on this list. Read on to learn about the twist they put on this traditional cocktail! Image Courtesy of... 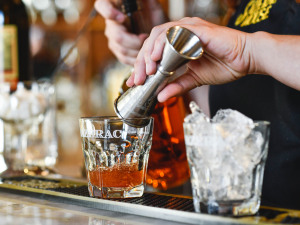 Being the official cocktail of New Orleans since 2008, the Sazerac cocktail is a staple in the New Orleans community. To celebrate this cocktail, Sazerac Cocktail Week is being hosted by the Sazerac House, beginning on Monday, June 21 and ending on Sunday, June 27. Sugar, Peychaud's Bitters, Herbsaint, Sazerac Rye Whiskey, and a lemon twist are the five traditional ingredients found in the flavorful Sazerac cocktail. The Sazerac House...