A young heart attack survivor becomes consumed by the mystery surrounding the heart that saved her life. However, the closer she gets to uncovering the truth about her donor’s sudden death, the more she starts taking on the characteristics of the deceased — some of which are troublingly sinister.

With aliens once again threatening Earth, young Shinjiro must now don the metallic ultra-suit to become Ultraman — like his father before him.

All the President’s Men

Divine Secrets of the Ya-Ya Sisterhood

The Sisterhood of the Traveling Pants

The Sisterhood of the Traveling Pants 2

Kevin Hart brings his sold-out comedy tour, Kevin Hart: Irresponsible, to a global audience for his first original Netflix standup special. The one-hour special was filmed in front of a sold-out live audience of over 15,000 people at the O2 Arena in London, England. Hart touches upon his friends, family, travel, … and a year filled with Irresponsible behavior.

After a pregnant woman is murdered, her spirit seeks revenge against her increasingly terrified killers, who are determined to finish her off for good.

Part 2 finds Sabrina exploring her darker side, curious to learn more about her heritage, while struggling to maintain her friendships in the mortal world. Romantically, Sabrina is caught in an unholy love triangle with between sexy warlock Nicholas Scratch and salt-of-the-Earth mortal Harvey Kinkle. Meanwhile, The Dark Lord, Madame Satan, and Father Blackwood continue to conjure chaos in the Spellman household and the town of Greendale. And they aren’t the only ones trying to raise hell. Everything is in question…relationships, identity, true intentions…when the devil’s work is at hand.

Exhilarating visuals and stunning footage of rarely-seen animals mix with somber truths about humanity’s impact on the planet’s habitats and species.

An eclectic exploration of different personas in a collection of four short films directed by critically acclaimed Korean directors.

Once beloved by the troops and people alike, Caligula shocks Rome by ruling with the cruel depravity and debauchery that make him infamous.

Big changes lie ahead for Lucky and her friends in an eventful final season — from new babies at home to a faraway boarding school.

When a prominent politician is murdered in cold blood, intrepid local journalists risk their lives to uncover the truth.

Kit (Brie Larson), a twenty-something dreamer, receives an invitation that would fulfill her childhood dreams.

The trolls face a day without a holiday, Biggie accidentally starts a fun-tastic new dance craze, and Guy turns a camping trip into a “glamping” trip.

You vs. Wild — NETFLIX ORIGINAL

In the dark, early days of a zombie apocalypse, complete strangers band together to find the strength they need to survive and get back to loved ones.

A cop in Singapore investigates the disappearance of a Chinese migrant construction worker who spent sleepless nights playing a mysterious video game.

After moving to LA to reconnect with his son, comedian Gad Elmaleh must learn to live without the celebrity perks he’s accustomed to in France.

An innocent toddler’s boundless curiosity — and extraordinary might — lead to mischief and adventure in his small Indian town.

To save up for college, Brooks Rattigan creates an app where anyone can pay him to play the perfect stand-in boyfriend for any occasion.

When the world is under attack from terrifying creatures who hunt their human prey by sound, 16-year old Ally Andrews (Kiernan Shipka), who lost her hearing at 13, and her family seek refuge in a remote haven. But they discover a sinister cult who are eager to exploit Ally’s heightened senses. The Silence is directed by John R. Leonetti (Annabelle) and stars Stanley Tucci, Kiernan Shipka, Miranda Otto, John Corbett, Kate Trotter and Kyle Breitkopf.

A young gay man with cerebral palsy branches out from his insular existence in hopes of finally going after the life he wants.

Who Would You Take to a Deserted Island? — NETFLIX FILM

On their last night together, four longtime flatmates’ lives are suddenly upended when a secret is revealed during the course of an evening celebration.

A family finds their lives turned upside down when a young, street-smart grifter appears on their doorstep, claiming she’s a distant relative.

On the first night of spring, the Super Monsters and their families gather for food, fun and games in the park — and meet their adorable monster pets!

Due to various personal reasons, a group of Yun Tae-o’s friends move into his house, where they experience love, friendship, and everything in between.

A gifted engineer flees his austere roots to pursue wealth and success among Copenhagen’s elite, but the pride propelling him threatens to be his ruin.

Best-selling author Brené Brown discusses what it takes to choose courage over comfort in a culture defined by scarcity, fear and uncertainty.

Ken thinks he’s hit the big time when he discovers a wealthy half sister he never knew he had, but her fortunes and his hopes are soon reversed.

Burned by his past, an emotionally troubled, small-town music teacher risks everything he has to reconnect with a now-famous former student.

Karoru leads a mundane life, but she gets to go home and find comfort in Rilakkuma, her endearingly lazy roommate who happens to be a fuzzy toy bear.

The series follows the story of a former child star from the 80s, Samantha! (Emanuelle Araújo) who desperately clings to the fringes of celebrity. Together with her husband Wound (Douglas Silva) and their children Cindy (Sabrina Nonato), and Brandon (Cauã Gonçalves), she delights with hare-brained schemes to launch herself back into the spotlight.

Aspiring music journalist Jenny (Gina Rodriguez) has just landed her dream job at an iconic magazine and is about to move to San Francisco. Rather than do long distance, her boyfriend of nine years (Lakeith Stanfield) decides to call it quits. To nurse her broken heart, Jenny gathers up her two best friends Erin (DeWanda Wise) and Blair (Brittany Snow) for one outrageous last adventure in New York City. From writer/director Jennifer Kaytin Robinson (creator of MTV’s Sweet/Vicious) Someone Great is a hilarious and heartfelt story of friendship, love, and what it means to let go of your twenties and enter adulthood.

It lit up jazz and hip-hop — and ignited a war on drugs steeped in racial injustice. Experts explore America’s complicated relationship with weed.

Pinky Malinky is on a roll! Catch up on this joyful hot dog boy’s continuing adventures as he spreads fun and positivity with best friends Babs and JJ.

Manjunath Kumar, fourteen, knows he is good at cricket – if not as good as his elder brother Radha. He knows that he fears and resents his domineering and cricket-obsessed father, admires his brilliantly talented sibling and is fascinated by the world of CSI and by curious and interesting scientific facts. But there are many things about himself and about the world that he doesn’t know. When Manju begins to get to know Radha’s great rival, a boy as privileged and confident as Manju is not, everything in Manju’s world begins to change and he is faced with decisions that will change both his sense of self and of the world around him.

I Think You Should Leave with Tim Robinson — NETFLIX ORIGINAL

In this new sketch show, Tim Robinson and guests spend each segment driving someone to the point of needing — or desperately wanting — to leave.

Facing formidable odds against the resurgent Immortals, Hakan and the Loyal Ones must forestall sinister plans to destroy the city — and all humans.

Robert Johnson was one of the most influential blues guitarists ever. Even before his early death, fans wondered if he’d made a pact with the Devil.

She-Ra and the Princesses of Power: Season 2 — NETFLIX ORIGINAL

Adora and the Princess Alliance train to get stronger, but Catra and the Horde are on the move. As Hordak pushes for victory, She-Ra faces a new test.

From the creators of Chef’s Table, Street Food takes viewers to some of the world’s most vibrant cities to explore the rich culture of street food all over the globe. Season one explores nine countries across Asia, from the hawker stalls of Singapore to the food carts of India. Each episode highlights the stories of perseverance and culture that bring life to each country’s cuisine.

A young man from Texas crosses the border into Mexico and becomes an infamous drug lord.

Everyone knows there is no topic Anthony Jeselnik can’t conquer, and he doesn’t disappoint in his second Netflix original comedy special Anthony Jeselnik: Fire in the Maternity Ward. Following his 2015 special Thoughts and Prayers, the comedian’s critical and biting style weaves through societal taboos without hesitation.

A convict himself, bounty hunter Biscuit Oliva is dispatched to Tokyo to apprehend the escaped inmates and thwart them from unleashing further chaos.

After scientists discover a mysterious substance that can influence human minds, two factions wage an all-out battle to control its awesome power. 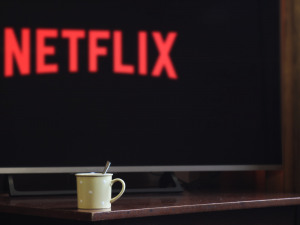