Can a videogame disappointment still be successful?

For the last several years, Sean Murray, co-founder of small startup Hello Games, had been hyping his new game concept: An “infinite universe” composed of planets, each with procedurally-generated content that differs from the other—vast, lush terrain waiting to be explored, so large that it’s “impossible” for players to overlap. And you, an orphaned astronaut, crash-landed on the surface of one of these random planets and are left to figure out what to do next, with the ultimate goal of advancing to the center of the galaxy … exploring and unraveling mysteries along the way.

At least that is the premise of the game, “No Man’s Sky”, the most ambitious game concept since 2008’s “Spore”. It’s available on the PlayStation 4 and the PC, and designed to fulfill every child’s dream born from looking up at the night sky and wondering, “What’s out there?” 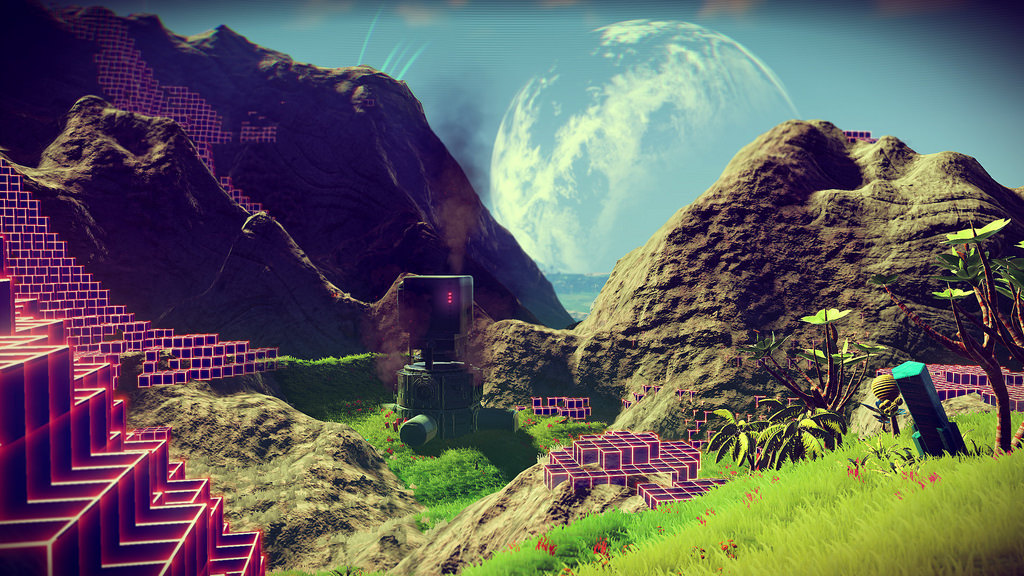 Unfortunately, within weeks of the game’s release, players are finding that Hello Games’ vast expanse of planetary bodies, game mechanics and storylines are decidedly repetitious and one-dimensional.

The first few hours of the game will have players in awe at the majesty of the solar system in which they’ve been dropped. Bizarre plant and animal life. Unusual colors, extreme temperatures, even sunrises and sunsets and weather events. You can move around examining these worlds, but you won’t get far unless you dive into the first and most common aspect of gameplay: mining resources in order to repair and maintain your equipment. 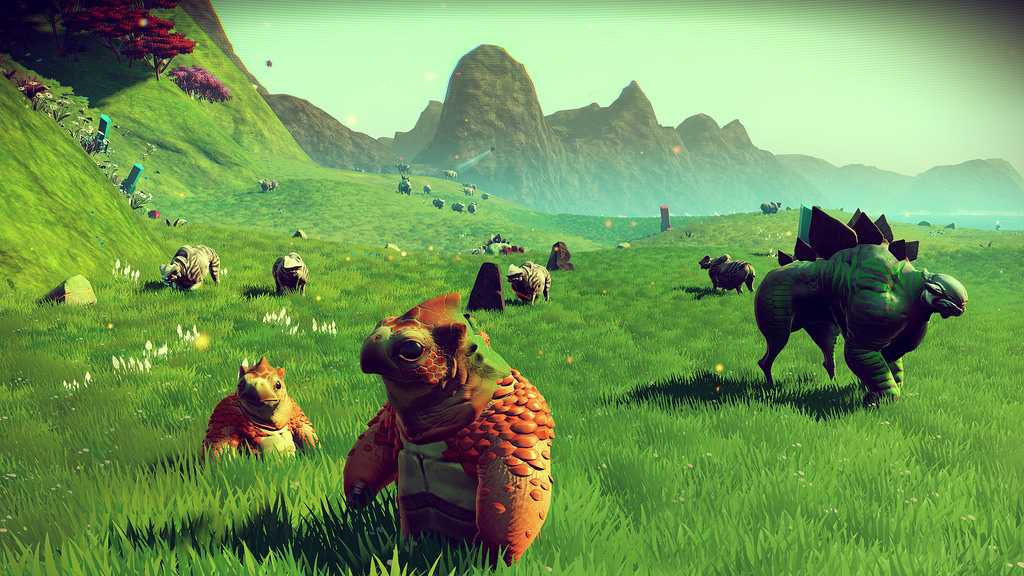 And from there the game seems to grind on. You never escape the incessant need to gather resources to maintain life support, upgrade equipment and travel within the game. In order to properly illustrate the vastness of the cosmos, the game developers have created multiple ways to travel at different speeds, yet with each never seeming to be quite fast enough. So you are always reminded of how far apart everything is.

On each planetary body there’s a small variety of things to discover: plant and animal life, for which you receive credits that can later be used to purchase items in a centralized marketplace, along with various other alien landmarks such as landing sites, monoliths, abandoned facilities and space stations. As you explore, you learn alien languages and improve relationships. The presence of alien life appears to totally permeate No Man’s Sky’s universe. But you only seem to run into these guys one at a time, and they’re always impressed if you give them some trinket you picked up meters away—despite the fact that they appear to have been around eons before you and beat you to every place you travel. That’s the first sign that trying to understand any ultimate purpose of the game might be an exercise in frustration. On top of this are the “sentinels”, some type of robotic race that gets upset if you attack things on the planet, and sometimes will get aggro on you for no reason. Don’t ask why. Just shoot them and continue on your way. 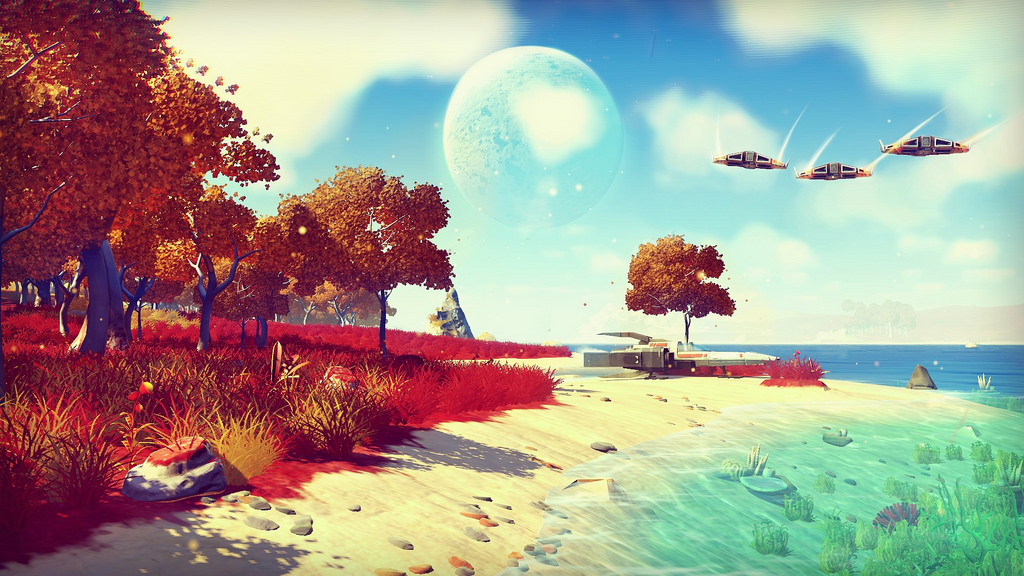 And that, in a nutshell, is No Man’s Sky. Land, Mine, Repair. Wash, Rinse, Repeat.

There are plenty of neat things to discover though. What happened to this abandoned outpost?  Will we uncover some elaborate storyline? It seems so at first, but ultimately, no, it’s just set dressing. Get back to mining. What happens when we fully learn an alien language? Does it unlock some new realization? Yeah, um, about that...

One user remarked, “Love the look and feel of exploring the worlds ... BUT after nearly 30 hours of play, everything is getting pretty monotonous and repetitive. I think they did a great job on creating fantastic worlds, but then neglected to put enough variety in the gameplay side of things…”

Most everyone seems to agree that the premise has tremendous potential. But the implementation falls short, and the community’s anger is the result of the developer’s promise of a much more dynamic universe than was delivered. From more realistic physics affecting the planets to multi-player interactions, to unique crafting and ship configurations, everything seems to have been nerfed down and oversimplified. This has infuriated a large array of gamers who feel there are huge voids of content missing from the game, making it unworthy of its $60 price tag.

Perhaps the most disappointing aspect of No Man’s Sky, many people won’t even discover: What’s at the center of the galaxy?  We won’t spoil it, but one user commented, "I’m taking a break from games for a while. This one really had me asking what the hell I am doing with my life..." 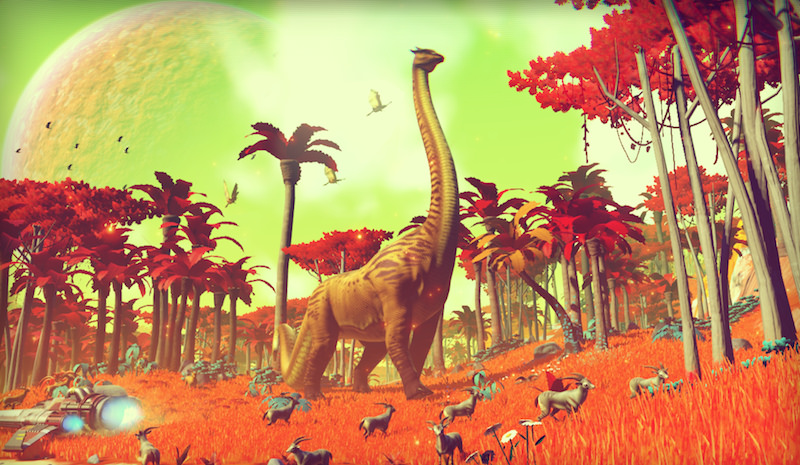 Game developers are hinting at updates which may address many players’ concerns, but at this point, the game is out and they’ve made a lot of money. Will there be much incentive to fix it? Nobody really knows.

What’s interesting is that among the flurry of frustrated gamers voicing their displeasure at No Man Sky’s, “mile long length and one-inch depth”, are a small cadre of space cadets who actually have embraced and enjoy the game’s shallow design.

One of the oldest adages is, “It’s the journey, not the destination” and some are realizing that the casual exploration of planets in No Man’s Sky has a lot to offer. 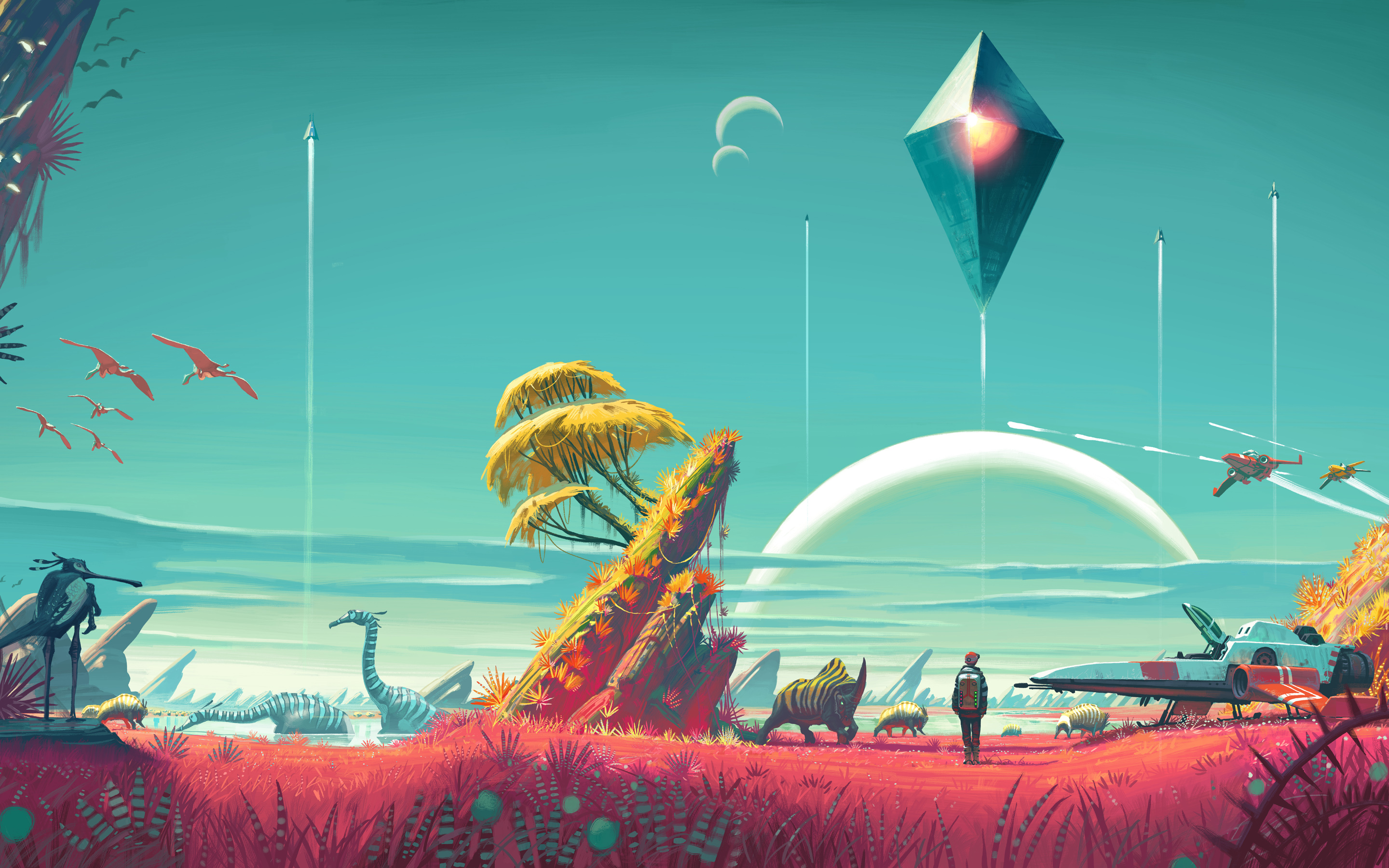 “There's a grain of something to the game that appeals to the wanderer in me. I've never been a ‘mastery’ gamer,” says player Opticon. Another user, CinerousApricity reports, “It's been a sweet ride. I was a real skeptic of the game initially, but the leaked streams convinced me to buy and I wasn't disappointed. It's not the best game ever and not really even that ‘revolutionary,’ but IMO it's great for what it is.” Brandt75 said, “It's relaxing, cathartic, thoughtful, and meditative. I'm still on my second system and it's a nice break from anything fast-paced.”

Perhaps a game that promised so much but delivers a bit less isn’t as bad as you think? Another metaphor for life? Some players are appreciating No Man’s Sky as a mellow way to chill out, a break from the pulse-pounding drama of many games. How about you?