Tune In, Turn On, and Drop Out with Frankie and the Witch Fingers

Frankie and the Witch Fingers is just as enigmatic as their name is. The garage psychedelic rock band has been concocting their sonic potion for a while now, and their music never fails to hypnotize. The magicians deliver a unique sound comprised of skull-rattling hits and Floydian riffs, taking you on a full-throttle rollercoaster ride. Now, they're coming to dose the Crescent City.

The band landed themselves on the map with their debut album, Frankie in the Witch Fingers, in 2015. Over the past four years, they've released five albums and racked over 35,000 monthly listeners on Spotify. Their latest album, ZAM, is a hypnotic masterpiece. By the end of the eleven-song long record, you'll be craving and clawing for more.

Singer/guitarist of Frankie and the Witch Fingers, Dylan Sizemore, talks more about the band's creation, their sound, and the upcoming show at One Eyed Jack's.

Where Y'at: Can you talk to me about the creation of Frankie and the Witch Fingers?

Dylan Sizemore: It all started in the winter of 2013 as a side project. It was meant to be an outlet for some unused songs I had, and a way to jam with any musician friends that were interested in playing with me and my bass drum and guitar set up. One night at a bar I ran into Glenn Brigman, who I knew from playing with his band Triptides. He said he was trying to record as much music as possible, and if I had any material he'd be down to track it on his Tascam 8 track. I was so excited I showed up to his house the very next day with a list of songs I wanted to record. That's kind of how the formation of the full band started. That day we started recording the first song Sidewalk. From there we continued to play live and recorded two more records before leaving Bloomington for Los Angeles.

WYAT: How would you say the band's sound evolved from the first album to this latest one?

Sizemore: Organically. The latest album is a completely different animal; it was premeditated before being recorded. The first album was spontaneous, and spur of the moment. It's the difference between blown out demos and an attempt at a studio album.

WYAT: It seems as though you guys weave "dark magic" motif into your music. What kind of non-musical influences do you guys draw on for your sound?

Sizemore: I personally am quite fascinated with magick or magic or whatever you want to call it. Basically, anything that can't be scientifically categorized. I've always leaned in an evil direction, and so has my human expression. I don't read that often, but I find a lot of inspiration in Alan Watts books/lectures and Crowley's drug fiend stories. I'm not extremely well versed in anything in particular, but I'm certainly a fan of darkness and magick.

Sizemore: New Orleans is my all-time favorite place to visit on tour! Shout out to Melbas! I love the voodoo swamp energy and the wild jazzy people! It's got the most character of any place you can go to in the US. Caitlin and Dan from Melt House Productions are also our favorite people to visit when we tour. They always make us feel at home when we're in NOLA, and they put on the raddest shows. We're really excited to play with our friends in Loudness War; if you haven't check them out, you're messing up big time, they rule! So yes, we couldn't be more stoked for New Orleans!

Be sure to check out Frankie and the Witch Fingers at One Eyed Jack's on October 2nd! Tickets are on sale now here. 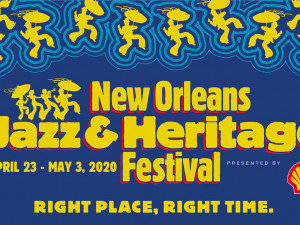 Jazz Fest Announces the Lineup for 2020

The Music of David Bowie: Tripping Memories of Ziggy Stardust

Legendary musician David Bowie, born David Robert Jones, is known the world over for his classic, futuristic and trippy sound. Known not only for his music Bowie also made a number of appearances on film. His most notable performance is in the 1986 film Labyrinth. Born in the UK, Bowie is no longer with us, but his legacy lives on. On November 15, at 7:30 The Mahalia Jackson Theater will host an event paying tribute to his complex, layered...