Taking Flight With The Counting Crows

After a building collapse, a global pandemic, and a destructive hurricane or two, the Saenger Theatre has been forced to close and reopen so many times in the past two years. Crows are typically harbingers of doom, but The Counting Crows seemed to bring hope with them to our city. Their nostalgic tunes and light, airy attitude just helped everyone to breathe a deep, collective sigh of relief. And it's looks like better days are to come.

The show was opened by Sean Barna and his band, who somehow made me think of The Mamas & The Papas with the inclusion of a 1990s-esque organ drone. Our crooner/guitarist Sean led the sizable group of six, sporting a glittering red-on-black shirt which contrasted the rather happy and thoughtful music that poured forth. However, the crew did add a large dose of humor to the set. Sean stated, "The next song is called 'Sleeping With Strangers,' which is about sleeping with strangers. I'm gay so I do it a lot." His friends and fans in the audience all the way from Brooklyn wailed at that.

The big band made way for something much lighter but with no less impact. Adam Duritz himself introduced Matt Sucich as "a quintessential New York singer/songwriter." Matt was joined by a couple of the Counting Crows, who lent a helping hand on instruments including a steel guitar during various parts of his set as he rambled through his ultra-Americana tunes on an acoustic guitar. Little did I know that there would be quite the variety of instruments not often seen at rock shows coming soon.

The Counting Crows took to the stage without much grandeur; they didn't need that kind of pretense. The entire audience was already standing and cheering for them as they launched into "Round Here" then "Hard Candy." Adam slowly and gracefully paced the stage, singing and speaking poetically. Maybe prophetically as he ended his songs softly and whimsically.

The third song jolted the already entranced crowd: "Mr. Jones." Adam hardly had to sing a note since everyone was already singing it for him. Sometimes he would dip the microphone into the audience to make them feel like they were the ones on the stage. In fact, the stage was lined with photography lighting gear that made you feel like you were in a massive photoshoot with them. The photography rigs and the cascading floor-to-ceiling netting behind them gracefully changed colors depending on the mood of the songs.

Whenever a song came along about Louisiana, they were usually a soft orange like the Louisiana sunsets. "Cover Up The Sun" was obviously a huge hit this night, and it really put people into a sentimental mood. I really appreciated the addition of an accordion played by keyboardist Charlie Gillingham and a mandolin played by guitarist David Immergluck. Adam got excited by this palpable communing, and he said this was the longest stretch he's gone without playing in Louisiana since he was a teen. "I appreciate a town full of crawfish," he gleefully yelled, and the crowd roared with acceptance. Adam also said that he may have gotten a little buzzed during the opening acts, and they roared again.

This was a long, glorious set with nearly two dozen songs, and still no one could get enough. The crowd favorites were "Goodnight Elisabeth," "When I Dream of Michelangelo," and certainly "Holiday in Spain." But, alas, it did have to end. The Counting Crows took flight and left us a little lighter of spirit and with the songs of easier days in our ears.

Ten years ago, I interviewed Gojira's vocalist and rhythm guitarist Joe Duplantier in a tour bus parked in front of The Hangar. Since that time, the band has crossed over from metal nearing the mainstream, inviting in a wide array of listeners and fans that prompted Gojira to... 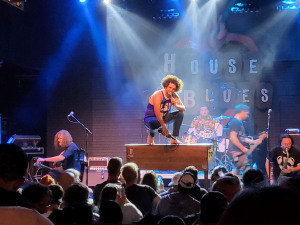 How do you describe what a wave looks like when it's rolling? Or an avalanche as it falls? How do you describe what an Andy Frasco show is like, which I'm going to attempt to do now? Describing his music is just one part of it. This five-piece band is really about movement. Moving on stage in crazy, spasmodic ways to make you, the audience member, move your body and hopefully your soul to a higher place. Andy Frasco donned an LSU... 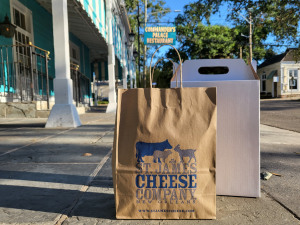 Wine Guy Dan Davis and the Commander's Palace Crew could not let this week go un-fested. It was supposed the be the first New Orleans Jazz & Heritage Festival since 2019, but a rise in COVID cases put the kibosh on it. The Shoulda Been Jazz Fest Wine & Cheese show stood in its place and had most of the revelry that you would find in actual Jazz Fest. Attendees to the virtual bash were treated to a spread of three wines,...