Have you ever ordered something at a restaurant, ate a small portion of it, and became satiated, but insisted on eating more or finishing the plate?   Did consuming more make you feel worse?   Was it really worth it?   You think you “got your money’s worth,” but in the end what did you get?  Bloated and disappointed in yourself.   What just happened?

Maybe you just bought the latest game software.  You played it a bit and it was ok, and now there’s a new expansion (add-on bonus material, for you non-gamers).  You already have money invested in the franchise, so even if you’re not having that much fun, you should get the new expansion, right?   What’s the point of having August’s top game if you can’t get September’s best expansion pack for it?  Right?

Duck!  You’ve been fragged by the, “Sunk Cost Fallacy.”

Just the other day I looked at a pound of mushrooms in my fridge, and not wanting them to go bad, I ran to the store and got $18 worth of things to add to it in order to make a meal.   What the hell did I do?  Am I going to eat “Mike’s Mushroom Surprise” all week?   I succumbed to the “Sunk Cost”… and indigestion! 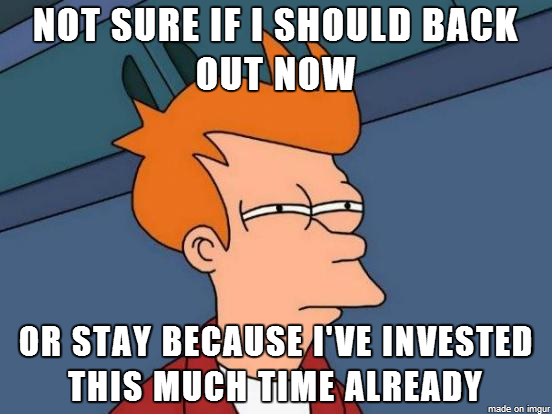 We humans are peculiar creatures.  We have a tendency of repeating things that aren’t terribly enjoyable because we feel we’re losing something greater if we abandon a project or product into which we’ve previously invested.

Sunk Cost has long been a staple in economic theory.  It involves questionable decision-making in matters of finance, whereby people take into account non-refundable investments in resources as a justification for future spending -- often spending that really doesn’t make sense, and doesn’t benefit them long-term.

Imagine a company that just spent $10,000 upgrading all their computers with new software, but that software has lots of problems that will cost a lot more money to fix.  The Sunk Cost Fallacy would dictate that they might as well spend the extra money to fix the problem they already put ten grand into.  But in reality, it might be more economical to abandon the software entirely and move to something else. This is how people end up making poor decisions and wasting a lot of resources – ironically, as a function of them trying not to be more wasteful.

Nowhere is the Sunk Cost Fallacy more visible in action than in many modern games.   That high level World of Warcraft character?  You spent so much time building it up, got all your fancy armor and weapons… playing the game might now be akin to a tedious job, but you’ve got so much invested in it that you can’t give up.   So you keep playing, convincing yourself that, “I can’t let this go.  I’ve put too much into it!”  But…Do you?  What exactly will you lose?   If you’re not getting the joy you once had, and you can’t get back the time and resources you put into the character, why not leave it at that and move on to something more enjoyable?   Time is a precious commodity as well.

In mobile applications the Sunk Cost is what drives, “in-app purchases” that can add up to lots of money. Some argue that many of today’s games are designed to be more addictive than entertaining.  It’s fun to play, but do you ever feel sometimes like the game is playing you?

So next time you feel compelled to spend some money to get past level 137, or pay to get more gold for a character to buy something you need online, ask yourself, “Is this still giving me the satisfaction it once was?”  Play because you enjoy it.  When it no longer is enjoyable, move on.  Don’t let the illusion of your past time and money chain you to something that doesn’t give the return it once did.

Oh, and go ahead and compost those mushrooms.