Run for It: Rock 'n' Roll Marathon and Half-Marathon Celebrates Its 10th Year in New Orleans

Want a fun and brag-worthy way to burn off all that king cake and booze you’ll be consuming this Mardi Gras season? Sign up for the Rock ‘n’ Roll Marathon or Half Marathon. Taking place on Sunday, February 10, Rock ‘n’ Roll is a fun race for all levels, from the elite athlete to the tutu-wearing, beer-chugging walker. So, whether you’re doing it for the glory, for the medals, or for the free shots and mimosas along the route, Rock ‘n’ Roll has something for everyone—from those who want to PR to those who just want a PBR.

And if your lungs, knees, or pain threshold simply won’t allow you to go a whole 13.1 or 26.2 miles, Rock ‘n’ Roll New Orleans also offers a 10k race that day and a 5k through the French Quarter the day before, on Saturday, February 9. Teyva Sammet, race spokesperson for the Rock ‘n’ Roll Series, says, “With a marathon, half marathon, 10k, and 5k, there truly is a distance for everyone. This race is also a great one to sign up for because of all our races, it has the longest time limit [seven hours max for the full marathon] and the course is very flat, so it is great for beginners and people wanting to take it easy.” 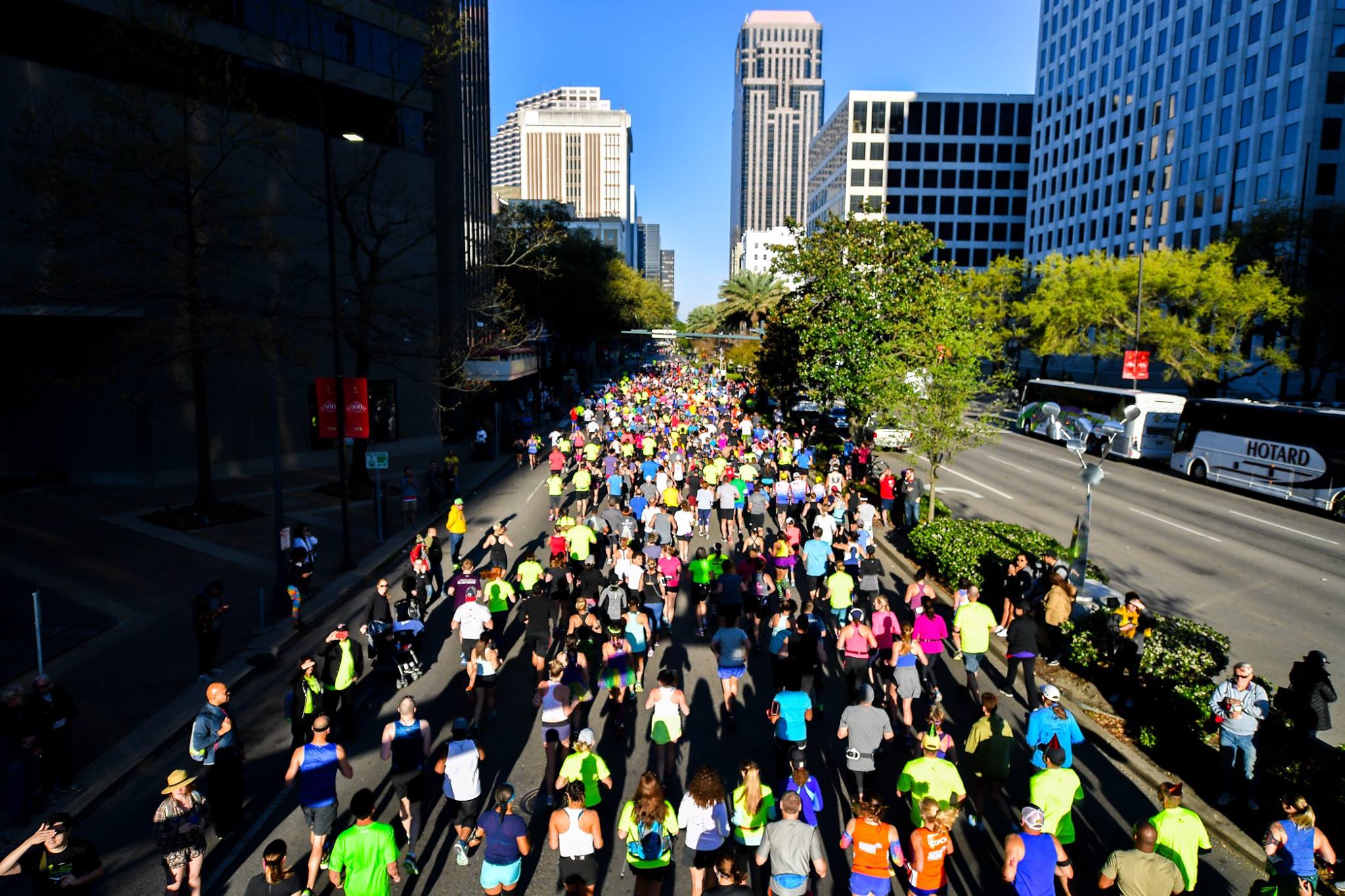 Established in 1998 in San Diego, the Rock ‘n’ Roll Marathon Series now has races in 27 different locations around the world, from Seattle to Savannah, Montreal to Madrid. This will be their “22nd year running” as organizers of these races, and the 10th year of the Rock ‘n’ Roll Marathon and Half in New Orleans. As many as 20,000 people are expected to take part in the daunting task of completing so long of a race—the same number that participated last year. To put that number in perspective, while only 0.5 percent of the entire American population of 327.16 million has ever completed a marathon, there’s a good chance that many of them have probably done so in a Rock ‘n’ Roll race. Therefore, if you sign up for Rock ‘n’ Roll, you, too, can be counted among the limited ranks of such proud athletes, alongside the likes of Oprah, P. Diddy Combs, and George W. Bush, who have all run marathons.

Rock ‘n’ Roll races aim to make running, especially long distances, less grueling and more fun by providing live bands and recorded music throughout the route, along with a “finisher fest” after the race that includes more live music as well as unlimited beer. Nothing puts a little spring in your 55,000 steps like a live jazz band at mile 10 or Imagine Dragons blaring over the loudspeakers at mile 19—so you can get more dance in your distance. 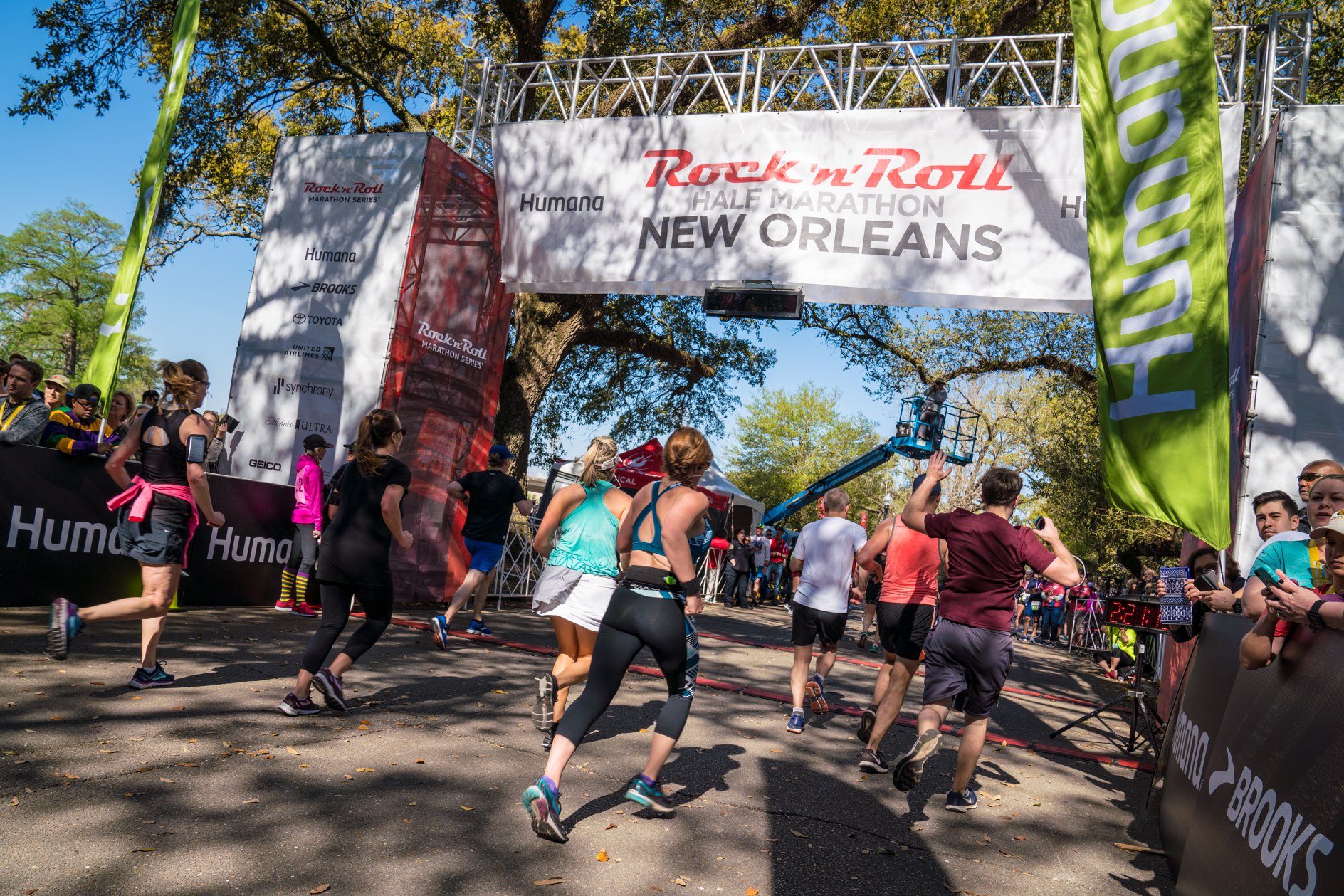 “We appreciate the incredible physical challenge our runners have signed up for, and we want to do everything we can to make it as enjoyable as possible,” Sammet explains. “It truly is a 26.2-mile block party, and there’s no other experience like that.”

This year, the Preservation Hall Jazz Band will be the headliner at the post-race party in City Park, and even non-racers are invited to come out and enjoy the music (though only race participants get to take advantage of the unlimited free beer).

In addition to bragging rights, all that free beer, and hours upon hours of live entertainment, every participant also gets a race t-shirt, chocolate milk and snacks at the finish, and some really impressive finisher medals embellished with everything from crawfish to king cake, depending on the distance. And those who do both the 5k and any other distance—a dual race endeavor known as the “Remix Challenge”—get a special bonus medal. There’s also a really cool two-day running expo selling the stuff of runners’ dreams, including running gear, Rock ‘n’ Roll merchandise, vitamins, shoes, headphones, t-shirts and sweatshirts, post-race sore-muscle-relief creams, and every imaginable trinket and doodad emblazoned with “26.2” and “13.1.” Stop by to pick up a 26.2 coffee mug or a 13.1 car magnet, so everyone at the office or passing you on the I-10 can know about your major accomplishment. 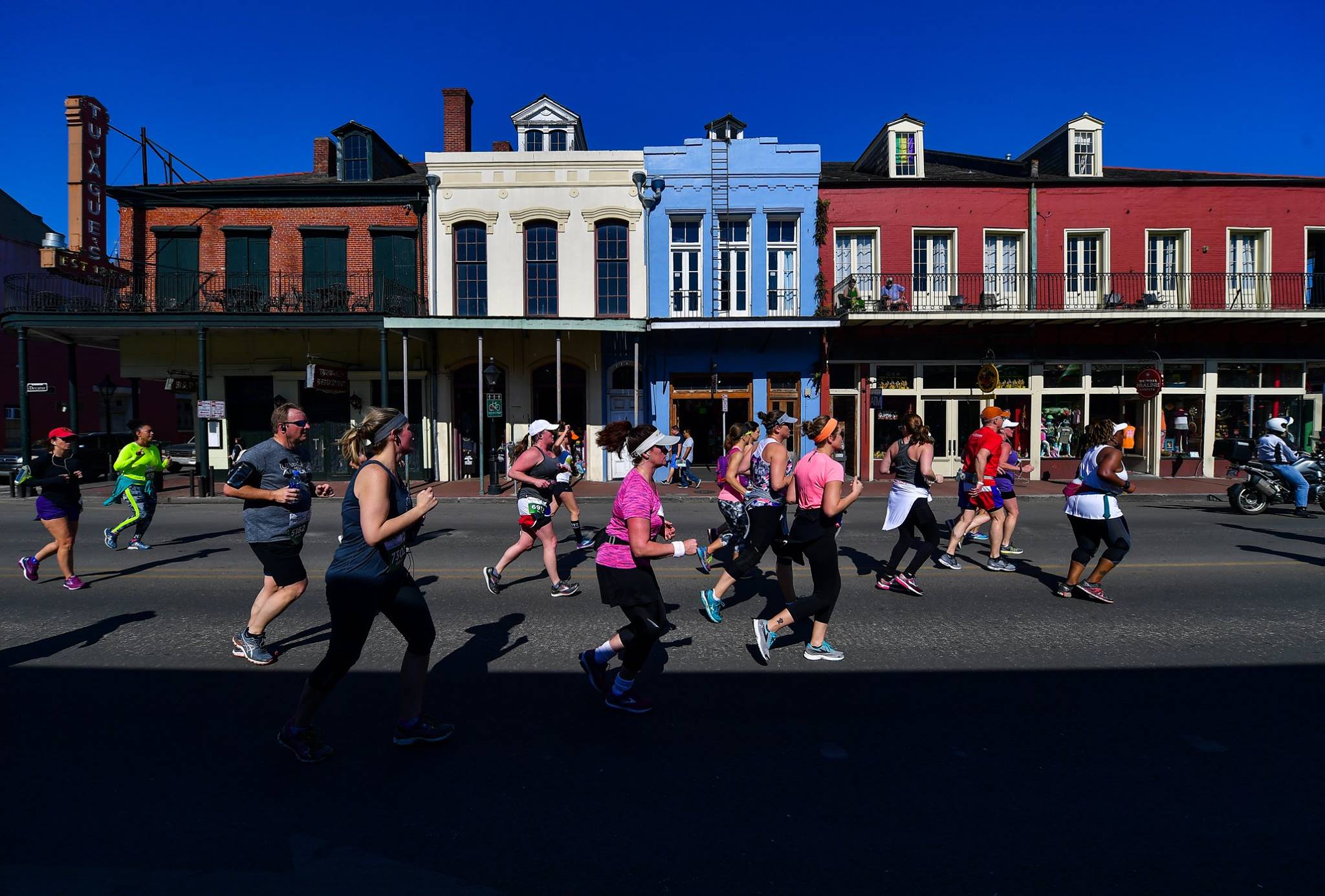 And if all of that is still not enough motivation to get you to lace up your running shoes, sign up for Rock ‘n’ Roll just for the health of it. Besides the on-average 2,500 to 3,000 calories you’ll burn if you conquer the full marathon (which would allow you to have a post-race binge of three slices of pepperoni pizza, a bacon double-cheeseburger, a six-piece chicken wings, two glazed donuts, a cupcake, and two beers), running also has a slew of other health benefits you may not be aware of. Studies show that running gives you stronger bones, lower blood pressure, better immunity, and a more active sex drive. It can help prevent Alzheimer’s disease, strokes, diabetes, and many other diseases and ailments, and it increases your odds of warding off a heart attack by as much as 50 percent. They say it can make you more productive, more creative, and a harder worker. They even go so far as to say that running will make you an all-around better and happier person (“runner’s high” is for real).

The races are supported by as many as 1,200 volunteers who come out to help out and pass out necessities from race packets at the expo to cups of water on the route to medals at the finish. Locals also turn up en masse to cheer on runners and walkers with homemade signs or to offer edible and drinkable encouragement. “The community support in the city is unparalleled,” Sammet says. “We see groups of people flocking to the streets to cheer on these runners and hand out their own kinds of on-course support. I’ve seen everything from beignets and king cake to Jell-O shots and martinis.” 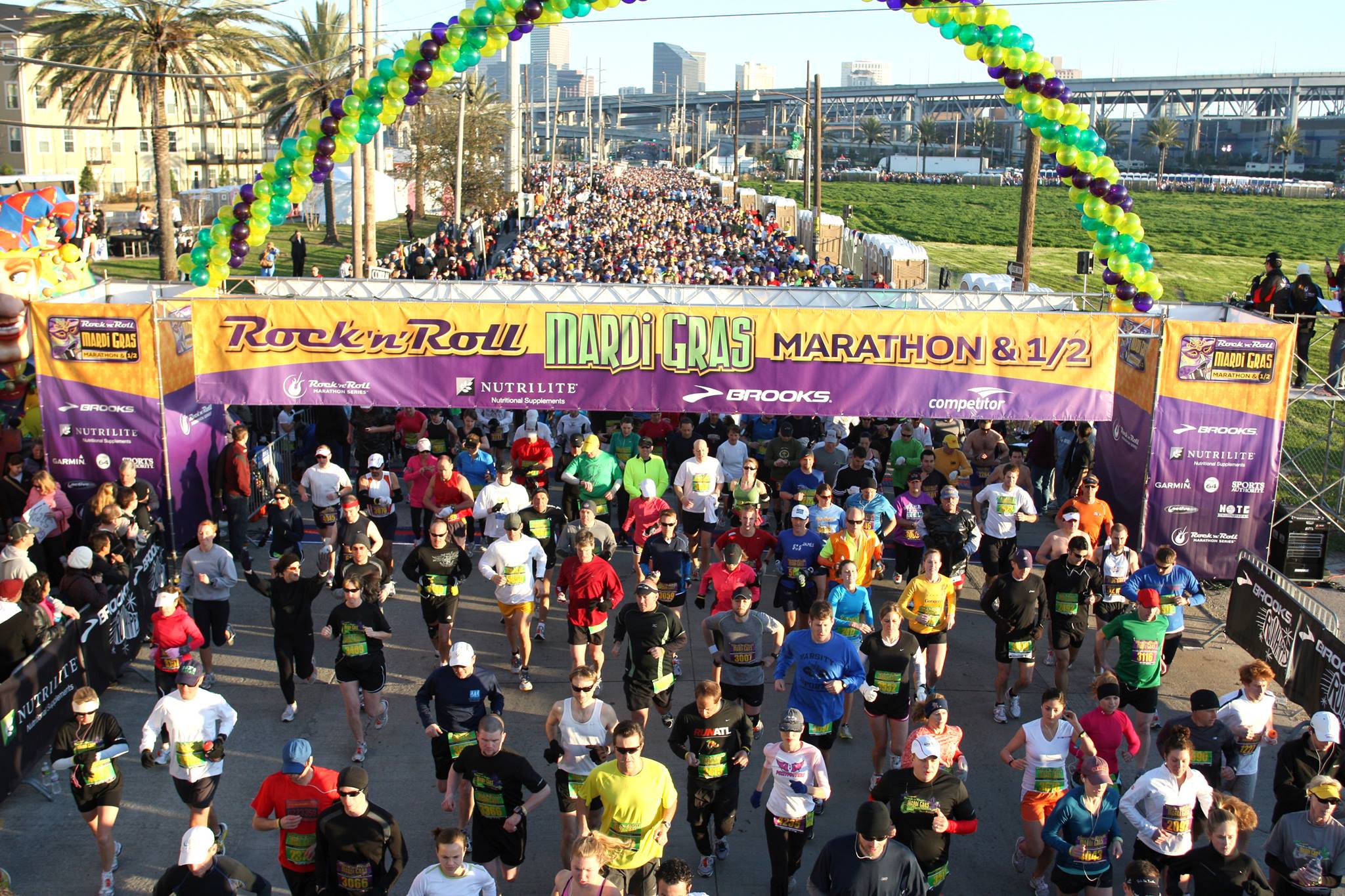 For locals, the Rock ‘n’ Roll events are a great way to spend a Sunday that doesn’t involve football or brunch. And for tourists, it’s an excellent excuse to come to town. New Orleans was recently named by The New York Times as the best place to visit in the country, so if you’re going to come here anyway, why not turn your trip into what Sammet calls a “runcation” and get a little physical activity in, beyond just lifting a cocktail glass or a fork or wandering down Bourbon Street?

“There’s honestly no better way to tour one of America’s greatest cities than on foot,” Sammet says. “This is an incredible chance to experience some of the best music and food New Orleans has to offer and accomplish your fitness goals while you’re at it.” Come for the red beans, stay for the race.

Nola has Wiiings is a project sponsored by Red Bull and the New Orleans Pelicans to team up with local artist Brandan Odums, also known as Bmike, to replace basketball backboards at different New Orleans parks. The event is to inspire local communities with bright and...