6:10 a.m. Monday, August 29, 2005, Hurricane Katrina slammed into the Southeastern Gulf Coast as a category 3, 4, or 5 storm (depending on your sources), with winds of 127 miles an hour. New Orleans, taking only the outer bands, was still hit hard; by that afternoon, 20 percent of the city was flooded. By August 30, 80 percent of the city was underwater. By September 1, approximately 55,000 people had sought shelter in the Superdome and Convention Center, having refused or been unable to evacuate. Many were still in their homes, many of them dead. Over a million people had fled after hearing the mandatory evacuation order 48 hours before.

The last of the water was pumped out of the city on October 11, 43 days after the storm hit. We were, as General Russel L. Honore quipped when seeing the local, state, and federal responses, "Stuck on stupid!"

In the aftermath, our city was (almost) completely evacuated, and troops went door to door looking for survivors and bodies. Debbie and I were in the French Quarter, holed up in our apartment on St. Philip and Dauphine Streets for six days before we saw any first responders, and by that time, we had finally found a way out of town. I aged six months in six days. Very few remember or recall those days, and those who do usually don't want to talk about it.

Here's what I remember: The night before, we went barhopping, played kick the can in the street, and wondered why that pizza delivery was taking so long. First bands of the storm start at 1:15 a.m. A few hours later, Debbie is dragging me and a mattress into the hallway to cower as what feels and sounds like the Four Horsemen of the Apocalypse enacts a no-knock warrant accompanied by chimneys imploding. A 50-year-old cypress tree is bashing the house while conducting a concerto of small tornadoes in the "Wreak Havoc Overture" through the neighborhood. Background music is provided by the Torrents of Rain Orchestra.

In the morning (expecting to go for coffee and a New York Times), electricity and water are cut off; the streets are empty. The next day, the last neighbors on our block caravan out. Somebody gives us their dog. Very quiet. Looting starts almost immediately: Cartier, Brooks Brothers, Pottery Barn, convenience stores, Winn-Dixie; anything that can be taken is taken for little or no apparent reason. One third of the police force drives out of town. Psychiatrists that can prescribe anti-depressants are gone, and folks are off their meds. Charity Hospital is under siege by boat. We clean up debris like good citizens. The weather is hot and there is no air conditioning.

Police loot Walmart for electronics, leaving behind, for civilian looters, the guns and ammunition that the store sells. Looters breaking into hardware stores steal bolt cutters; looters use bolt cutters to break into warehouses, stealing forklifts. Armed looters on forklifts off their meds. A kid steals a city bus and drives folks to Houston. The busses for evacuation are high and dry, but keys are underwater. Curfew imposed. Warm beer at Molly's at the Market, solidarity, and community updates. Cops put snipers on rooftops to discourage looters. Governor: "Shoot looters on sight." Mayor hiding out in a hotel; George Bush does a flyover. Esplanade Avenue is impassable due to fallen trees and debris.

Water in the street, petrochemical waste, medical waste, human waste, decaying animal waste. Explosions on the river Wednesday night. Rapes. A couple of corpses reported, abandoned on streets. Folks drifting into town from Lower Nine. Animals not allowed in shelters and being turned loose; reports of dogs being shot to discourage "packing." No ice, no refrigeration, no toilets, no bathing (no water). No lights at night besides gaslights. The kindness of strangers, food-sharing, help with bolt cutters to free a chained dog. The Nelly Deli gives away supplies on credit. We now are caring for four dogs and three cats. Our house is known as "Dogpatch."

A radio reports, "French Quarter looks like an island. The 'sliver by the river' holds, all else underwater." Animals coming out to avoid drowning—alligators, raccoons, snakes, and rodents, seeking higher ground like people do. People rescued from rooftops only to find that there's no way out of the city, people turned away at gunpoint from crossing into Algiers. Nita and Jeffery have their apartment taken away at gunpoint. Reports of trucks with bodies being dumped in the river, running gun battles. We're holed up on the second floor, banging tin sheeting to discourage "visitors."

A radio announces that thousands have been standing on the overpass for days, waiting. "Where are they going to the bathroom?" one reporter asks. "They're crowded together!" Looters set up a market in the Convention Center, which was broken into by folks not wanting to go to the Superdome, where that roof has blown partially off.

A fire at Saks Fifth Avenue set by looters and a scramble for water to put it out. Police tell us not to ride bikes because people are getting "bike-jacked" for a way out of town. Food rotting in refrigerators and restaurants (it's Labor Day weekend; people stocked up). Reports of a car to be had if we can get to it. Cemeteries flood, and bodies rise to the surface.

We're invited to a meeting at the Bourbon Orleans ballroom where the topic to be is the intentional flooding of the French Quarter to ease the outlying areas. Those left here transmit information and hearsay as they get it—some is rumor, and some turns out to be uncomfortable truths.

Fifteen years later, we veterans of Katrina find nothing about the coronavirus extraneous or dismissive. But still, ask any one of us, and we'll tell you that we've been through worse. Quit your bitching and put on a mask. As deadly as COVID-19 is, I wish Katrina had been this easy to deal with.

"Peter, Peter, pumpkin eater, had a wife but couldn't keep her. Put her in a pumpkin shell, and … she left him for Abe the green grocer." Pete didn't know what to make of it; he was completely surprised. Happy Valentine's Day. I knew a man once who drank after work well... 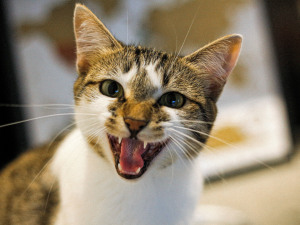 Tales From the Quarter: Cats Rule

Cats most certainly communicate with one another. And I don't just mean the usual back-and-forth exchanges of: "Hey, lookin' good, wanna mate?"
"Hell, no. I'm spayed, and you ain't all that, anyway!"
Or, "Move over; this is my chair."
"Well, Miss Territorial, remember that when you eat out of my bowl!"
And, "Hey, wanna cuddle?"
"Sure, if ya got some catnip." Yes, we observe cat chat daily, but I'm referring to... 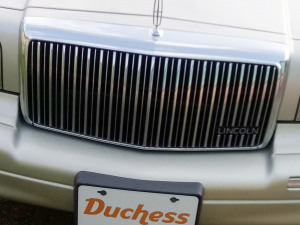 The Duchess of Lincolnshire is 24 years old and has seen a lot in her few years. Of course, if you measured her in human years, she would probably be as old as your new president. She is sleek, fast, and cheap (much like myself); she's at home in any neighborhood and gets waves and whistles as she passes by. She can cruise the hood or take to the road like a warrior, she's thrifty on gas, her brakes are good, and the tires are fair. She's...