While speaking with Frank Brigtsen about his long career in the local restaurant industry, sitting inside the hushed dining room of his popular Riverbend restaurant, Brigtsen’s, hours before dinner service, you'd almost believe that he had no hand in the success he's achieved. Due to his magnanimous nature, Brigtsen tends to remove his own hard work, passion and determination from the spotlight to focus on his greatest mentor, celebrity chef Paul Prudhomme. “I truly owe everything to Paul and Kay. We would not be sitting here today,” Brigtsen says. ”I didn't have the resources or probably the courage to ever do something like this.” Though Paul Prudhome was certainly a major influence and contributor to Brigtsen's career, one can't help but believe he is selling himself short, especially when learning of the road it took him to get here.

A Louisiana native, Brigtsen grew up in the small, riverside community of River Ridge before it had a name (back then it was called New Orleans 70123). Born in Southern Baptist Hospital on Napoleon Avenue, Brigtsen's father was a masonry salesman and his mother was a nurse. A “country girl” from Alabama, Brigtsen's mom was a wonderful home cook who made excellent catfish, grits and fried okra, but she also learned a lot of local recipes to please her husband's New Orleans palate. “She learned how to make red beans and rice and gumbo and oyster dressing ... which is the best thing in the world,” Brigtsen admits. “Of course, we also came from a generation where we had dinner at home every night together as a family.”

Brigtsen dove into the working world at the tender age of 14, taking summer jobs initially and then working steadily through his junior and senior years at De La Salle High School. But his first job in the food industry was as a sandwich maker at Blimpy Base in Baton Rouge. “I was excellent. Very, very fast meat slicer,” Brigtsen recalls with a smile. While pursuing a degree in fine art, he continued to work in the restaurant industry, a profession that made an indelible mark even after he returned home.

Following a series of unfortunate events (lost his car, job and apartment in one fell swoop), Brigtsen was forced to move back into his parent's home at age 24 and, determined to get back on his own feet, he scoured the classifieds. ”One day there was an ad for Commander's Palace: 'Now Hiring Creole cooks or people willing to learn Creole cuisine.'” After three interviews with the executive chef, who just happened to be Paul Prudhomme, Brigtsen was offered a job. “[Prudhomme] said, 'You have a choice, Frank. We'll hire you as a broiler chef and we'll put you on the front line and pay you good money and expect a lot out of you, or you can start as an apprentice in the pantry station making very little money, but you can expect a lot out of me.' And that's what I chose.”

Over the next six months, Brigtsen absorbed the wisdom of Chef Prudhomme and worked almost every station in the house, from dishwashing to sauté. “I learned how to work in a very busy, high-quality establishment and that was really the beginning of my career.” Impressed with his hard work and commitment to excellence, Prudhomme offered Brigtsen a job at his newly opened, now-famous restaurant in the French Quarter, K-Paul's. “I became the first-night chef there,” Brigtsen says. “I did lunch service with a helper and I did dinner service with a dishwasher. It was incredible. I was learning!” 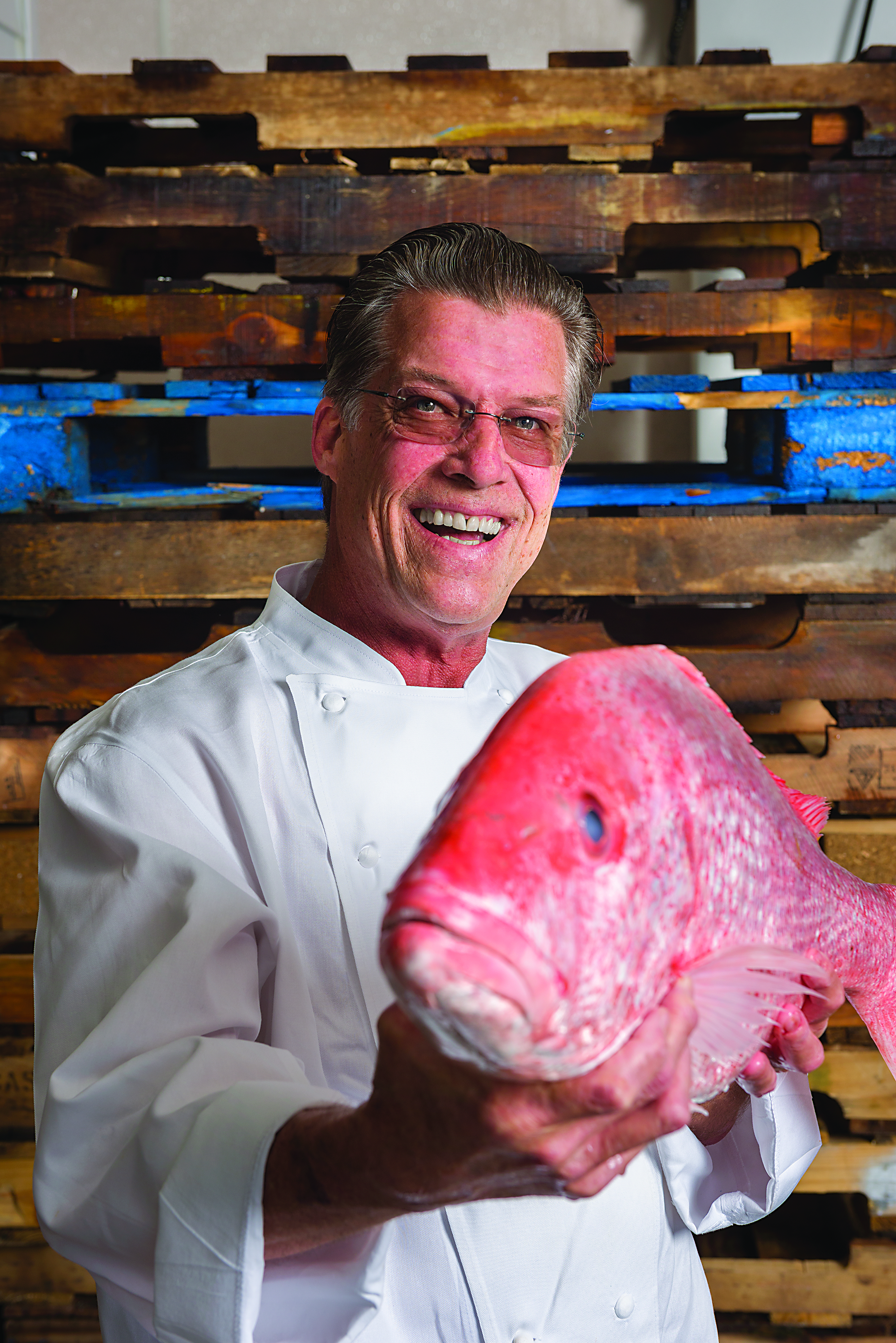 Brigtsen stayed at K-Paul's for the next seven years, which was a formative time not only in his career, but also for the global status of American regional cuisine. “Cajun food became the most popular thing in the whole world … literally,” Brigtsen says. “The way we ate, the way we cooked, the way we dined out changed.” In the early 80s, the entire concept of “farm-to-table” cuisine exploded in the U.S. and chefs like Paul Prudhomme, Alice Waters, Wolfgang Puck and Larry Forgione were the vanguards who brought it to light. With Prudhomme, Brigtsen traveled to San Francisco and Los Angeles to not only share Cajun and Creole cuisine, but also to get a taste of what was being prepared in restaurants like Chez Panisse and Spago in California. Both chefs were awed by the region's plentiful produce. “We started shipping in things for ourselves here at great trouble and expense,” Brigtsen recalls. “Paul was such a revolutionary person, although he didn't set out to be ... he just followed his convictions.”

While the farm-to-table ideology was new to the American restaurant industry, Prudhomme's methods had always been ingredient-focused. “Chef would go home on the weekends to Opelousas and he'd come back Monday morning with all these little goodies, little bags of things,” Brigtsen says. “[It was] the first time tasso had ever crossed Orleans Parish lines, I'm sure!” This love of farm-fresh ingredients led Prudhomme to build his own distribution system where his nephew, Eddie Prudhomme, would come in once a week with trucks filled with products. “Not just produce, though, animals too! Whole pigs, guinea hens, chickens, ducks ... it was unbelievable,” Brigtsen says.

One day, Paul and Kay Prudhomme sat Brigtsen down and told him that he was ready to venture out on his own, and just like that, Brigtsen's Restaurant came into being. “They lent me the money. They set me up with a CPA and an attorney and a real estate agent,” he says. “It was his way of looking at life. If you are willing to work hard and do whatever it takes to better yourself, he would help you along the way.” Ever since opening his restaurant, Brigtsen has been paying it forward the only way he knows how, through food.

Every single day, Brigtsen lives his mentor's philosophy of cooking to make people happy. Not only does he dazzle diners with traditional Creole and Cajun cuisine or offer locals and visitors an almost familial level of hospitality and warmth at his Riverbend restaurant, Brigtsen has taken his mission several steps further. For more than a decade, he has been teaching cooking classes at The New Orleans Cooking Experience, the brainchild of Judy Jurisich who, during a sabbatical to Italy, realized that New Orleans needed a cooking program. With Jurisich, Brigtsen created the course curriculum which introduces home cooks to the wonders of contemporary New Orleans cuisine, instructing students in the creation of dishes like Pan-Roasted Gulf Fish with Truffled Crab Glaze, Banana Bread Pudding with Pecan Praline Sauce and Filé Gumbo with Popcorn Rice. “Through teaching, I've learned more about myself,” Brigtsen says. “I've become a better chef, a better person, and through that, I discovered the power of sharing.”

The catharsis Brigtsen realized after teaching for only a couple of years at The New Orleans Cooking Experience motivated him to reach out to the John Folse Culinary Institute at Nicholls State University in Thibodaux, about an hour west of New Orleans. Thrilled to have him, Nicholls State created a niche for Brigtsen where he could teach aspiring young chefs in Louisiana. “Teaching contemporary Acadian/Creole cuisine particularly after Katrina ... that mission became even more important to me,” Brigtsen says. “It became more important to me to protect and preserve this cuisine and this culture.” Though young culinarians born and raised in Louisiana are often aiming to expand their food knowledge outside the local arena, Brigtsen always tries to help them to appreciate where they came from. “I give the students a term paper for the semester and the subject is always the same … your favorite family recipe.”

What's Brigtsen's favorite recipe, you might ask?  “My favorite dish on the planet is filé gumbo,” Brigtsen admits. “I eat anywhere from a half cup to two cups every single day.” When asked who makes the best filé gumbo, Brigtsen doesn't hesitate before replying, “I do!” and one can't help but grin at the infectious smile that spreads across his face.

In recognition of his talents in the kitchen as well as in the classroom, Executive Director Sally Perry of the New Orleans Center for Creative Arts asked Brigtsen to be the first chef in residence. Founded in 1973, this professional arts training center for secondary school-age children offers intensive study in dance, media arts, music, theater arts and creative writing. In 2011, NOCCA launched a four-year culinary arts program with help from the Emeril Lagasse Foundation and Johnson & Wales University, offering high school students hands-on training and techniques, plus the unique ability to work alongside master chefs who act as both educators and mentors. “I had Chef Paul as my mentor, but everyone in life needs mentors,” Brigtsen says. “The most important thing he gave me was a chance, an opportunity, and that's what people need in life.”

Five Spots to Stick Your Fork into for National Waffle Day

All New Orleanians know that you can never go wrong with Chicken and Waffles. This classic New Orleans staple is loved by tourists coming to experience Southern cuisine, as well as locals looking for a mouthwatering breakfast. The beloved fluffy breakfast should be celebrated all day long for National Waffle Day. On August 24, check out these five local places for some of the best waffles around town!
Ma Momma's Ma...

Don’t Miss Out on the Tammany Taste of Summer

If there's ever a time to visit the Northshore, it's now. The Tammany Taste of Summer event is going on now until August 31 and is featuring a Special Savings Pass, sponsored by the St. Tammany Parish Tourist Commission, which allows locals and visitors to save on overnight stays, restaurants, and attractions. For most people, August means goodbye tan lines and hello textbooks. This, however, could be an opportunity for one last...