According to Nola.com, certain summer camps in New Orleans will be allowed to open their doors for campers on June 15; however, these programs will look vastly different from previous years. With the fun activities that come along with camp, new regulations such as temperature checks, staggered hours, and constant hand washing will now take place as well. Parents in New Orleans, although hesitant, need to return to work, and summer camps are a main source for childcare.

"Allowing access to summer camps and summer school is critical so parents can return to work and so that children can continue with their education," Dr. Courtney Phillips, secretary of the Louisiana Department of Health, said. "We must move forward with caution and guidance to keep each person safe."

Camp directors within the metro area said parents received strict guidelines about what is to be expected for summer camps that are supposed to open for at least part of the summer. Josh Tolbert, owner of Junction Place Sportsplex in Elmwood, is making efforts, such as separating the kids while they play certain sports, to ensure safety for campers.

"We're trying to do sports in a way that's extra cautious," Tolbert said.

More precautions at St. George's Episcopal School consist of eating lunch in classrooms, indoor spaces limited to one group at a time, groups being forbidden to mingle with other groups, and new "head to toe" napping rules. Along with these new regulations, campers who cannot follow these adjustments will be asked to leave the camp.

The new restriction rules come from the Louisiana Department of Health. "Roadmap to a Resilient Louisiana" holds the states reopening plan and outlines steps for childcare centers, summer camps, and others related.

Hygiene is also mentioned in the Roadmap and says campers and staff must wash their hands at least every two hours, and children who are over two are told to wear cloth masks. If children have underlying health conditions, they are asked to seek approval from a doctor before registering for camps or schools.

Staff is required to regularly clean facilities, and if any kid has a temperature over 100.4 degrees, they will not be allowed in. Precautions for if kids do get sick are in place and consist of an isolation room. State guidelines state that if a COVID-19 case is confirmed, the entire area will be sealed, and campers who have entered that room might not be allowed back for at least two weeks.

"I would love for [my daughter] to go [to camp], but I'm still so nervous," Ranshi said. "I just think it'll be hard to keep anything sanitary with a toddler, especially mine, since she loves licking everything at the moment."

Other moms like Jamie Peacock said that even though it can be difficult balancing work and childcare, she is deciding to keep her children home.

"Even with limited amounts of kids, all it takes is one [infection]," said Peacock, who works at home along with her husband and two children. "I understand that for some families, summer camp is necessary and very much get why these camps will be used. We are lucky in that we don't have to do it." 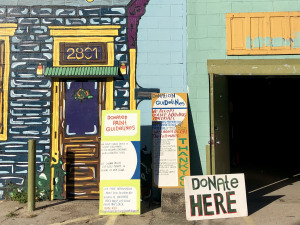