The DeCous family is about to hit the big screen and show 'em how it's done in New Orleans! On February 19, five of the DeCou sisters - DaShawn, Domonique, Darnell, Donya, and Denischia - will appear on "Family Feud", a family-oriented game show which airs locally at 5:30 pm and 6:30 pm on WUPL-TV, channel 54.

The New Orleans natives cannot wait to take over the show with their boisterous personalities and cutthroat competitiveness. The DeCou gang has a whole lotta love for the Big Easy; they are incredibly passionate about all things New Orleans, from the city's sports teams to its one-of-a-kind culture. The sisters even plan to bring miniature second-line umbrellas on set with them as a nod to the spirit and tradition of the Crescent City.

DaShawn, Domonique, Darnell, Donya, and Denischia took "Family Feud" by storm when they auditioned in Mobile, Alabama during the summer of 2018. After getting past the first round, they traveled across the country to Los Angeles, where they had to prove their worth by competing in practice games against other families. It didn't take long for the DeCous' to learn that playing the game on-screen is completely different from participating from the couch.

It's quite the coincidence that the episode will air in the thick of carnival season. That said, DaShawn is confident that local viewers will love what they will see on-air and hinted that there may even be a twist! 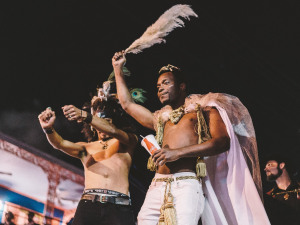