Mardi Gras Around the World

From Trinidad to the Netherlands, any place with a little bit of Christian heritage has some kind of pre-Lenten festive celebration. Here's a list of some sites around the world with Mardi Gras events that are uniquely different, and sometimes similar, to our own.

Belgium's best-known Carnival celebration is in the town of Binche, which is located in the country's Wallonia region. Dating back to the 14th century, the main identifying feature of the Carnival of Binche is the Gilles, which is a group of about 1,000 men who dress up in linen suits (typically designed with the colors of the Belgian flag), wear wooden clogs, and have bells on their belts. Early in the morning on Fat Tuesday, the Gilles, all wearing wax masks, gather in the town's center to dance and scare off evil spirits with sticks called ramons. In the afternoon, the Gilles change from their masks to plume hats and parade around town, tossing blood oranges to the crowds.

Home to the largest Carnival celebration in the world, according to Guinness World Records, the Rio de Janeiro Carnival has been a mainstay of Brazilian culture since 1840. While there are many celebrations in other cities all over Brazil, the Carnival in Rio is the one that most people will think of when they hear "Brazilian Carnival." The main attraction of Rio Carnival is the parade through the Sambadrome Marquês de Sapucaí, which incorporates over 200 samba schools (marching groups, like krewes, that perform African-Brazilian dance and drumming), dressed in feathery costumes and followed by very intricate floats. When the parade is over, many locals migrate to different st. festivals around Rio to dance and listen to music.

Officially named Carnaval de Québec, the winter Carnival in Quebec City, Quebec, is considered to be one of the largest winter festivals in the world. Typical celebrations during the Carnival include outdoor sporting events, snow-sculpting contests, a masquerade ball in the Château Frontenac hotel, bains de neige (bikini snow baths), and, of course, parades. Something completely unique to the Québec Winter Carnival is that parades will be led by the Carnival's official snowman mascot Bonhomme Carnaval, who made his first appearance in 1955.

Colombia's Carnival is primarily located in the city of Barranquilla. The main celebration of Carnaval de Barranquilla lasts for four days until Ash Wednesday, and each day is focused around a different celebration. The first day is for the Battle of Flowers, which is a float parade headed by the Carnival queen (the battle's name comes from a local practice of fighting with flowers after coming off the One Thousand Days' War). The second and third days focus on more parades, as well as an orchestra festival where different music ensembles compete against each other. The last day is marked by the funeral of Joselito Carnaval (who's supposed to represent the joy of Carnival), when the community dresses in different costumes and playfully mourns the end of the Carnival season.

Dating back to the 13th century, Masopust, or Slavic Carnival, has been a time-honored tradition in the Czech Republic. While major cities like Prague have more mainstream celebrations with period balls and concerts, villages in the Hlinecko Region hold onto more traditional customs. Fat Tuesday traditions for Masopust include masked men going door to door and doing a traditional performance for food and drinks, a parade led by a character in a spotted costume (the more spots on the costume, the more happy days the wearer will have for the rest of the year), and a symbolic sacrifice then resurrection performance at the end of the parade with a character who is supposed to represent a mare.

Not only is Carnival in France fairly close to New Orleans Mardi Gras, but one part of the country claims to have one of the oldest Carnival celebrations in the world. In the city of Nice in the French Riviera, the Carnival practice is documented as dating all the way back to 1294, based on the writings of Count Charles Anjou of Provence. Sharing some similarities and differences with New Orleans Mardi Gras, Nice's Carnival features a parade with about 20 papier-mâché floats, about 50 grosses têtes (big-headed giant puppets) tagging along in the parade, and people on the floats throwing flowers into the crowds.

Believe it or not, you can see two completely different versions of Carnival, depending on which region of Germany you're in. One version is the Rhenish Carnival found in western cities like Düsseldorf, Mainz, and Cologne. The Rhenish Carnival includes traditions like parades, costuming, comedy shows or events that poke fun at social issues, and the appearance of the Dreigestirn peasant, prince, and maiden characters (who are all portrayed by men). The other Carnival in Germany is the Fastnacht, which is celebrated by the Swabian and Alemannic people in the Baden-Württemberg part of the country. More focused in tradition and folklore, Fastnacht features people wearing wooden masks, dressing up as various cultural characters, and letting "fools" take over the government between Fat Tuesday and Ash Wednesday.

The Goa Carnival is significant because it is one of the very few Mardi Gras celebrations that can be found in Asia. This is because the Indian state of Goa was once occupied by Portugal as far back as 1510. With the Portuguese influencing that region, the local population adopted quite a bit of their Catholic traditions, including Carnival. The Goa Carnival is similar to the ones in Brazil and Portugal (floats, parades, costuming, a leader of Carnival called King Momo), but you might also see people throw colored dust on each other, which aligns with the Hindu festival of Holi.

While there are Carnival celebrations in many different cities in Italy, the most world-renowned has to be the Carnevale di Venezia (Carnival of Venice). This Carnival's claim to fame and most recognizable feature is the costuming and masks. In fact, the use of masks for the Venetian Carnival dates back to the 17th and 18th centuries. These masks are typically made from porcelain (masks can be made out of leather and glass as well), with either intricate designs or those made to represent a specific character associated with Venetian Carnival. The Carnival officially dates from December 26 through Ash Wednesday, so it would not be too surprising to see residents wearing their masks for that extended period.

The Russian pre-Lenten holiday of Maslenitsa (also found in Ukraine and Belarus) not only has Christian influences, but can also trace its history to the region's pagan Slavic roots. The holiday's name can literally be translated to either "Crepe Week" or "Cheese-Fare Week," so people will typically focus on eating dairy products (the characteristic dish of the season being bliny, which is a Slavic crepe). Specific traditions include stenka na stenku (a sparring match between men in traditional folk outfits), Forgiveness Sunday (friends and family ask each other for forgiveness for any wrongdoings the year before), and the burning of Lady Maslenitsa (a straw figure representing winter).

Since the dawn of recorded history, dogs have served as household pets and faithful companions to their owners and the families who house them. Today, they enjoy a special place in the hearts of millions of people who give them names, shelter, sustenance, and, above all, love and... 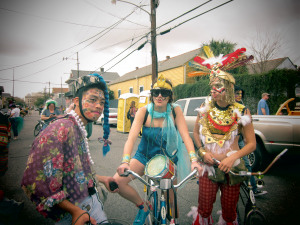 During the Mardi Gras season in New Orleans, we tend to live by the saying "Do what chu wanna," and we do just that, naturally. I can still recall early childhood memories of Mardi Gras Day. The city shuts down, and it wasn't until I moved to Atlanta that I realized that everyone else doesn't have that day off, too. It's the aroma of a fresh box of Popeye's chicken, the beat of St. Aug's drumline coming up South Rampart Street as... 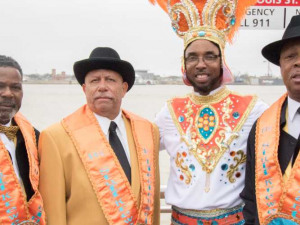 The 27th annual Lundi Gras Festival, hosted by the Zulu Social Aid & Pleasure Club, will be held on February 24 in Woldenberg Park, along the New Orleans riverfront. Lundi Gras Festival was founded in 1933 by George Rainey of Zulu and Ms. Karen Noles of the Audubon Nature Institute. The celebration is held the Monday before Mardi Gras and features Zulu float characters as well as coincides with the arrival of King and Queen Zulu. ...