New Orleanians are proud of their cuisine. Nowhere can match our city’s unique recipes, which are influenced by so many cultures. Call it Creole, Cajun, or Louisiana cuisine—New Orleans can point to influences from Europe, Africa, and the Caribbean in many of its most famous dishes.

In addition, the gastronomy of many new cultures can now also be found throughout the city. While previously it was French, Italian, and maybe Chinese for non-New Orleans food options, now the city boasts restaurants that include Vietnamese, Japanese, Ethiopian, Thai, Middle Eastern, and other international alternatives.

While the culinary scene in New Orleans is evolving, there are other cities that feature restaurants doing spectacularly innovative things. One of those cities is Madrid, arguably among the best food hubs in the world. 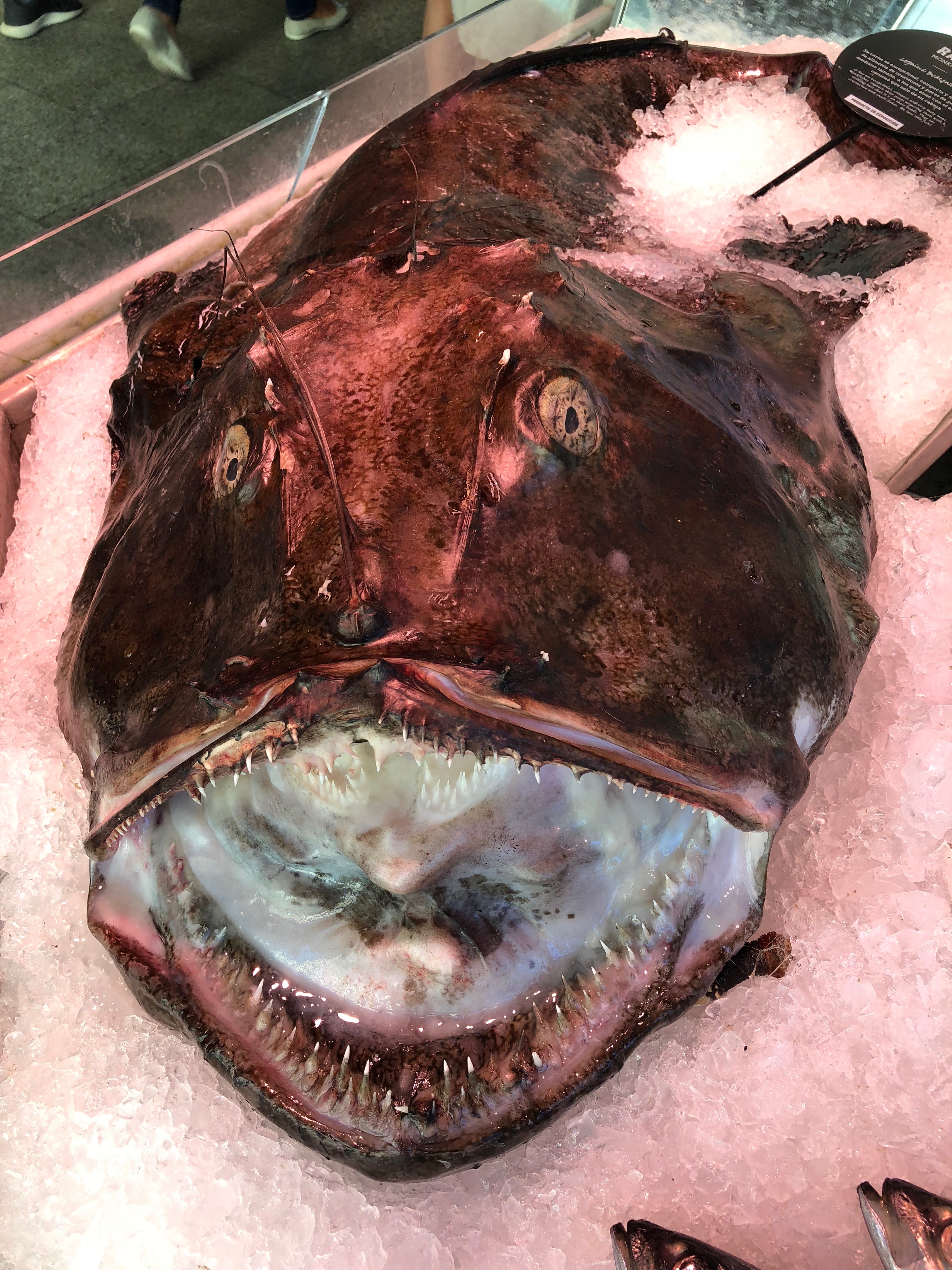 Madrid is the capital of Spain with a population of almost seven million people. It is the third-largest city in Europe behind only London and Berlin. Madrid is the political, economic, and cultural center of the country. It is like New York, Los Angeles, and Washington, D.C., all rolled into one.

Madrid is a city that features spectacular boulevards, manicured parks, and public works of art throughout the city. The city is filled with magnificent plazas, spots where people congregate to meet and converse, with Plaza Mayor the most famous. Madrid is also known for its world-class European art displayed in such museums as the Prado, the Reina Sofia, and the Thyssen-Bornemisza.  www.EsMadrid.com

There are numerous non-stop flights from the United States to Madrid, departing from such cities as Atlanta, Houston, and New York. Most major airlines, including Delta, fly there. While New Orleans does not yet offer a non-stop flight to Madrid, it will hopefully get one after the new airport opens in 2019.

As with any major city, there are numerous spots to stay, including hotels, hostels, and private homes. A great choice for your visit is the Westin Palace. The Westin Palace is a beautiful property situated in a fantastic location. Just blocks from the famous Prado Museum and spectacular Buen Retiro Park, the recently renovated hotel was commissioned by King Alfonso XIII in 1912.  https://www.marriott.com/hotels/travel/madwi-the-westin-palace-madrid/

In addition to fantastic rooms and amenities, the Westin Palace features superb dining options highlighted by La Rotonda restaurant. Named after the stained-glass dome that is the hotel’s visual signature, the restaurant offers breakfast, lunch, and dinner daily. If possible, book a reservation there for the Sunday Opera & Brunch; it will be a meal that you won’t forget. 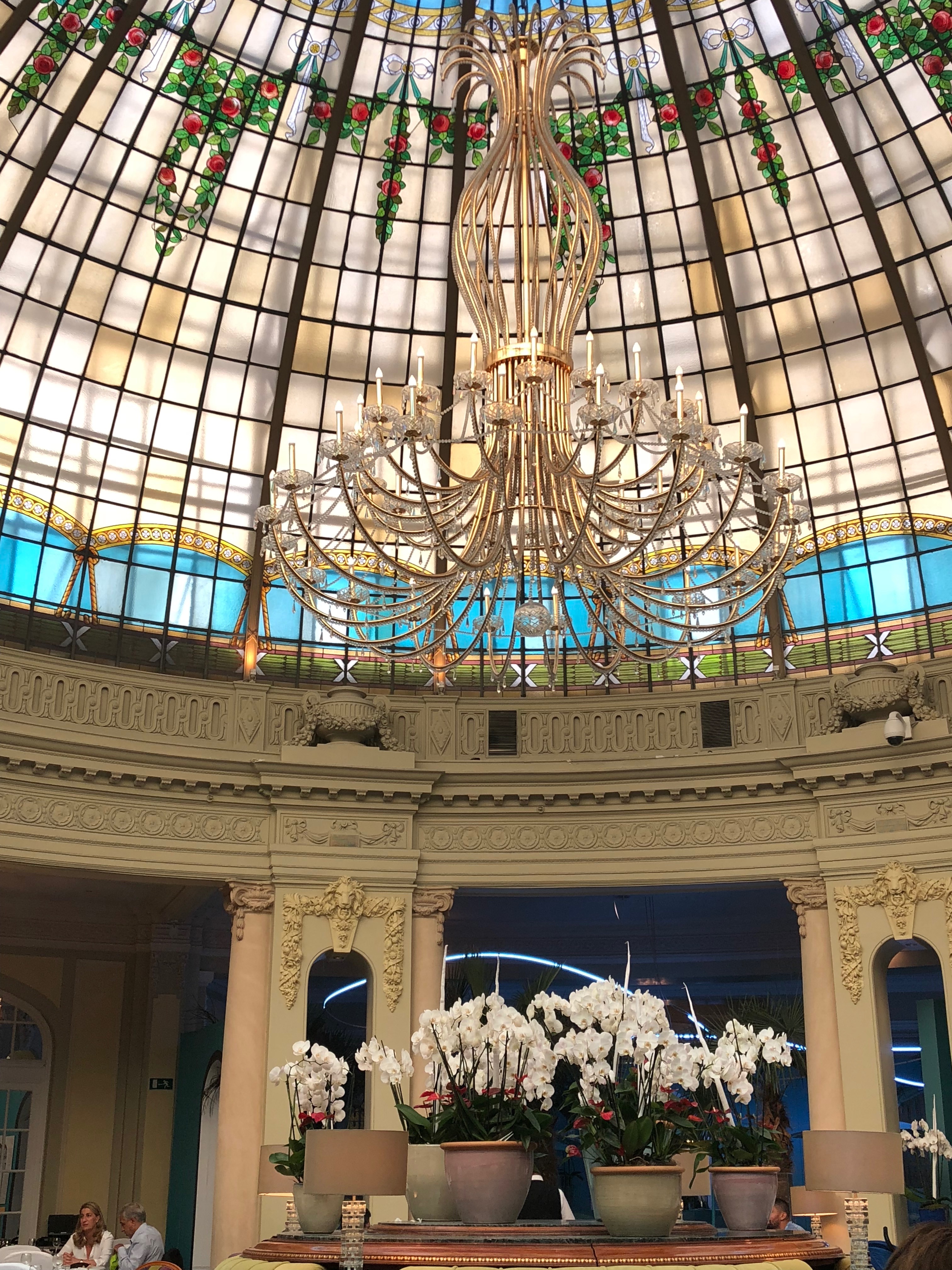 Before trying to grasp the food scene in Madrid, one has to understand the eating schedule of a Madrileno, or person from Madrid. Breakfast is eaten around 9 a.m. and often features the famous churros con chocolate. This is unlike any hot chocolate that you’ve had before, as it is often as thick as oil. Otherwise, the morning meal can be a typical European breakfast of a strong cup of coffee along with bread, cheese, and cold cuts. 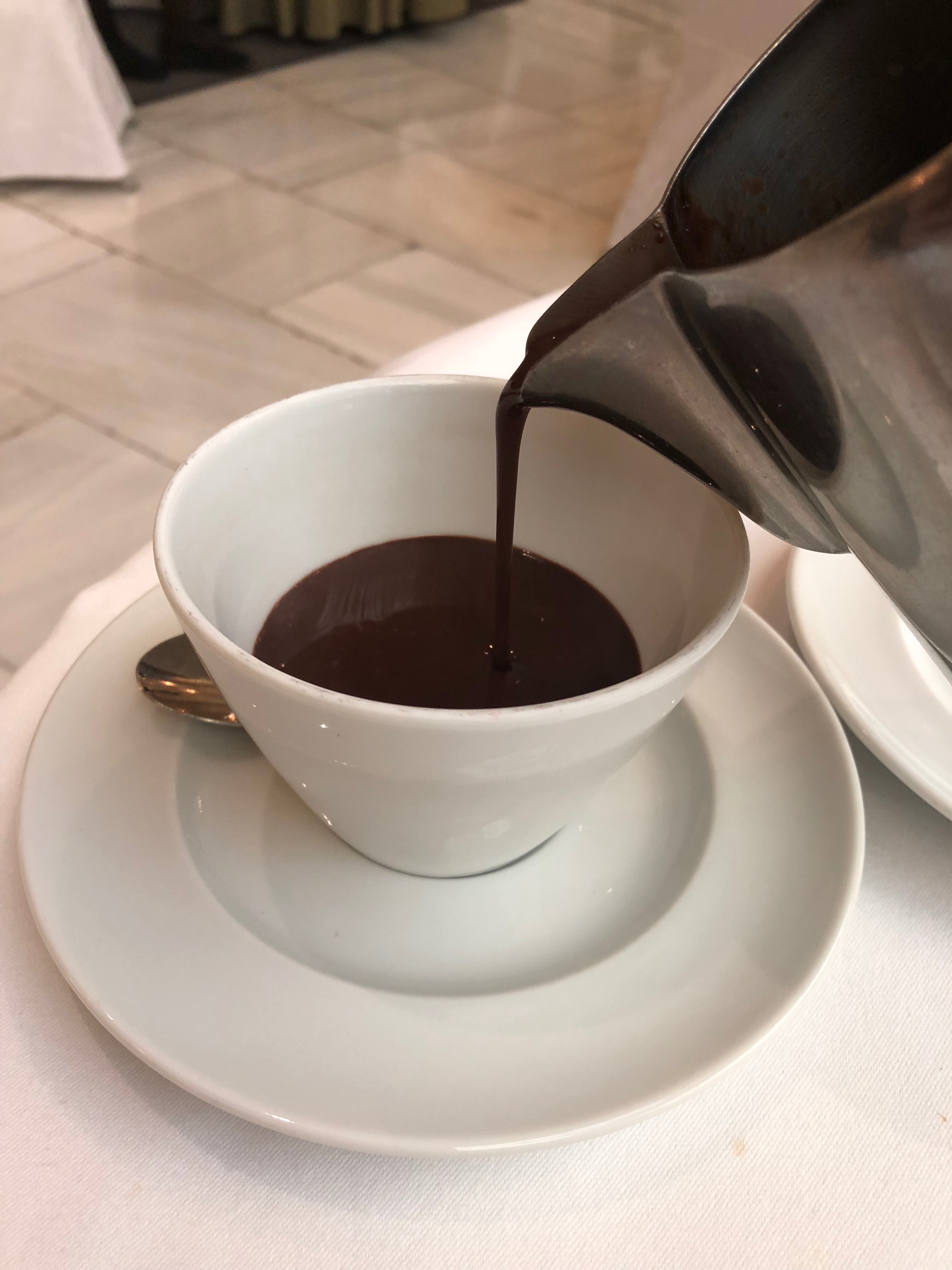 Lunch is the largest meal of the day, and is usually served beginning around 1 p.m.  Many restaurants feature a “menu del dia,” which is a multi-course meal that includes beer or wine at a reasonable set price. However, many people eat lunch at home with their families.  Lunch is followed by the siesta, or nap period. Shops close, schools let out, and much of the city comes to a stop during the siesta.

Work restarts typically around 5 p.m. and continues until roughly 8 p.m. At that time, people return home to freshen up. Dinner service does not begin until 9 p.m., though most people will not sit down to eat until 10 p.m. Dinner is usually a lighter meal than lunch, though it also normally features wine, beer, or both. Drinks after dinner can mean walking into a bar around midnight, even on weekdays.

Madrid is also famous for their tapas. Tapas are small appetizers or snacks in Spanish cuisine. It translates to a small portion and can be served cold or hot, normally with a glass of wine or cold beer. Well-known tapas include sardines on toast, olives, croquetas, cheese, and the famous Spanish ham, or jamon. Tapas are the perfect thing to start a culinary tour of Madrid. 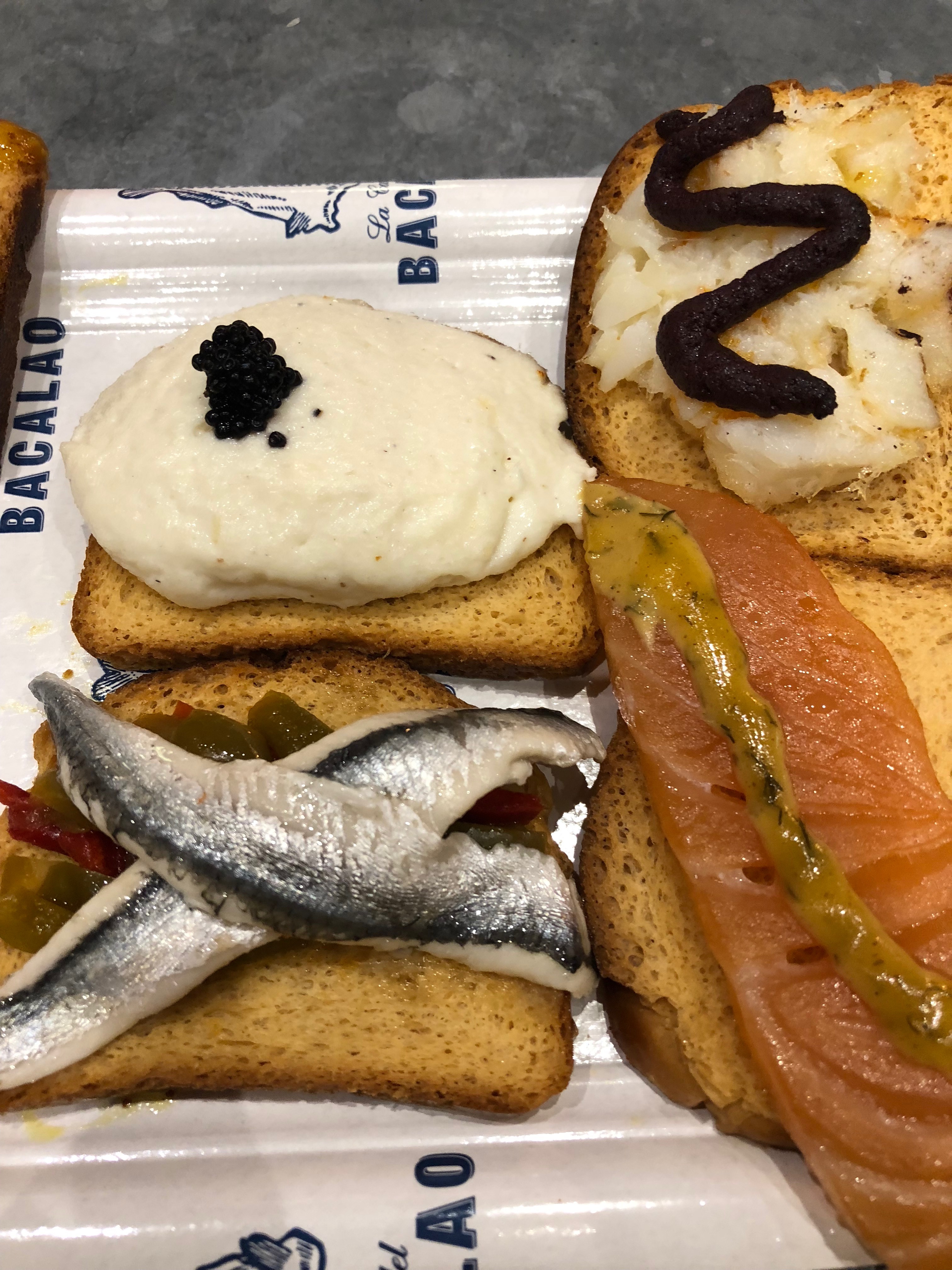 While the city is filled with famous tapas bars and restaurants that have been around for hundreds of years, the San Miguel Market is an especially great spot for tapas. Originally built in 1916, the space was recently converted into a food hall. It includes numerous stalls that feature both traditional and modern tapas, and the communal tables provide an excellent atmosphere to meet new friends. Food highlights there include the fried octopus, codfish with caviar on toast, and mounds of fresh burrata cheese topped with salmon. 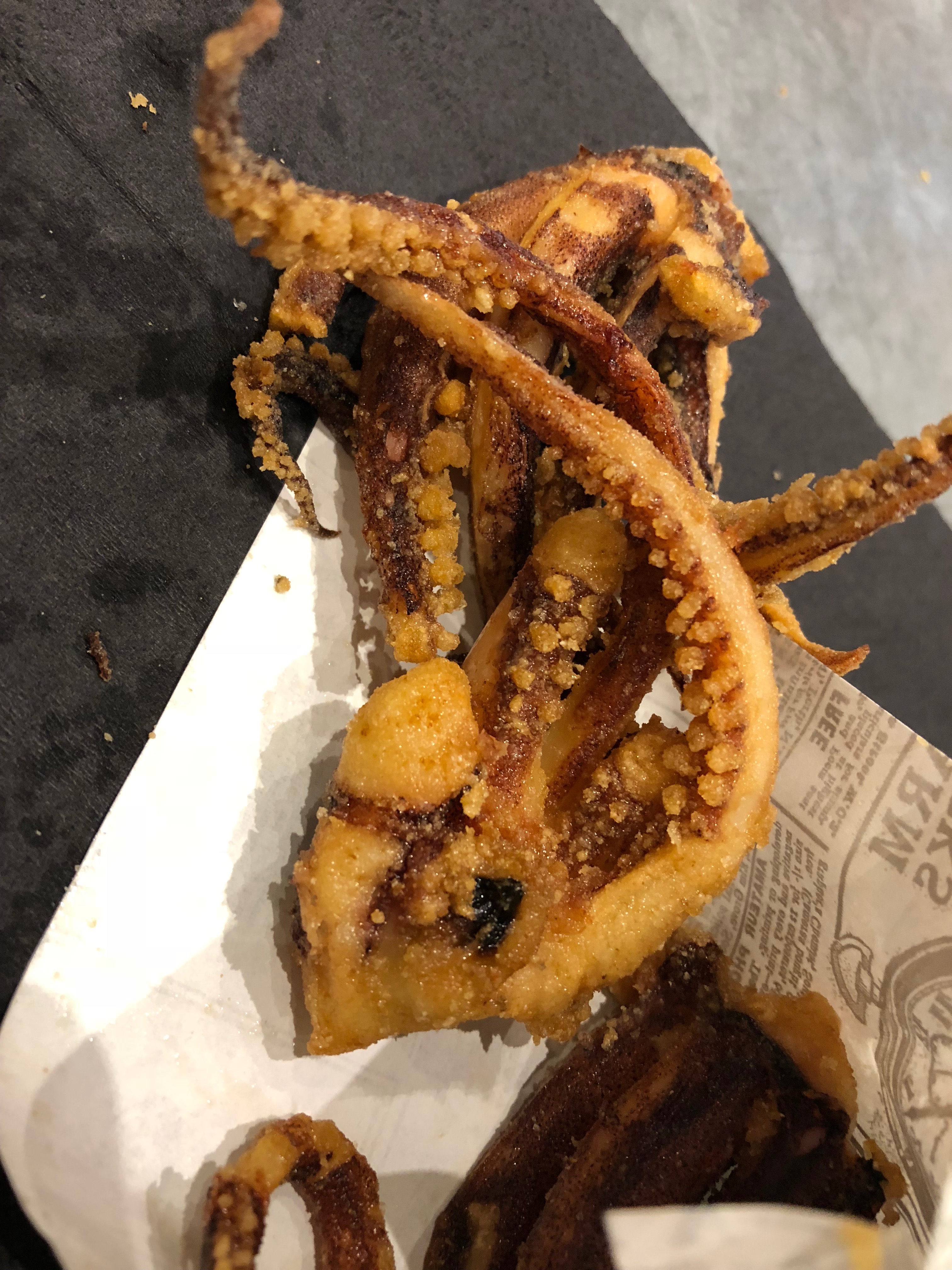 Another spot for tapas is the department store El Corte Ingles. Head to the flagship location in the Castellana neighborhood for not only great shopping, but a fantastic food court with immense offerings. High points include superb seafood and freshly baked savory pastries. El Corte Ingles stretches over nine floors and also features a full grocery store with gourmet items such as seafood, meats, cheeses, and the famous Spanish jamon. elcorteingles.es 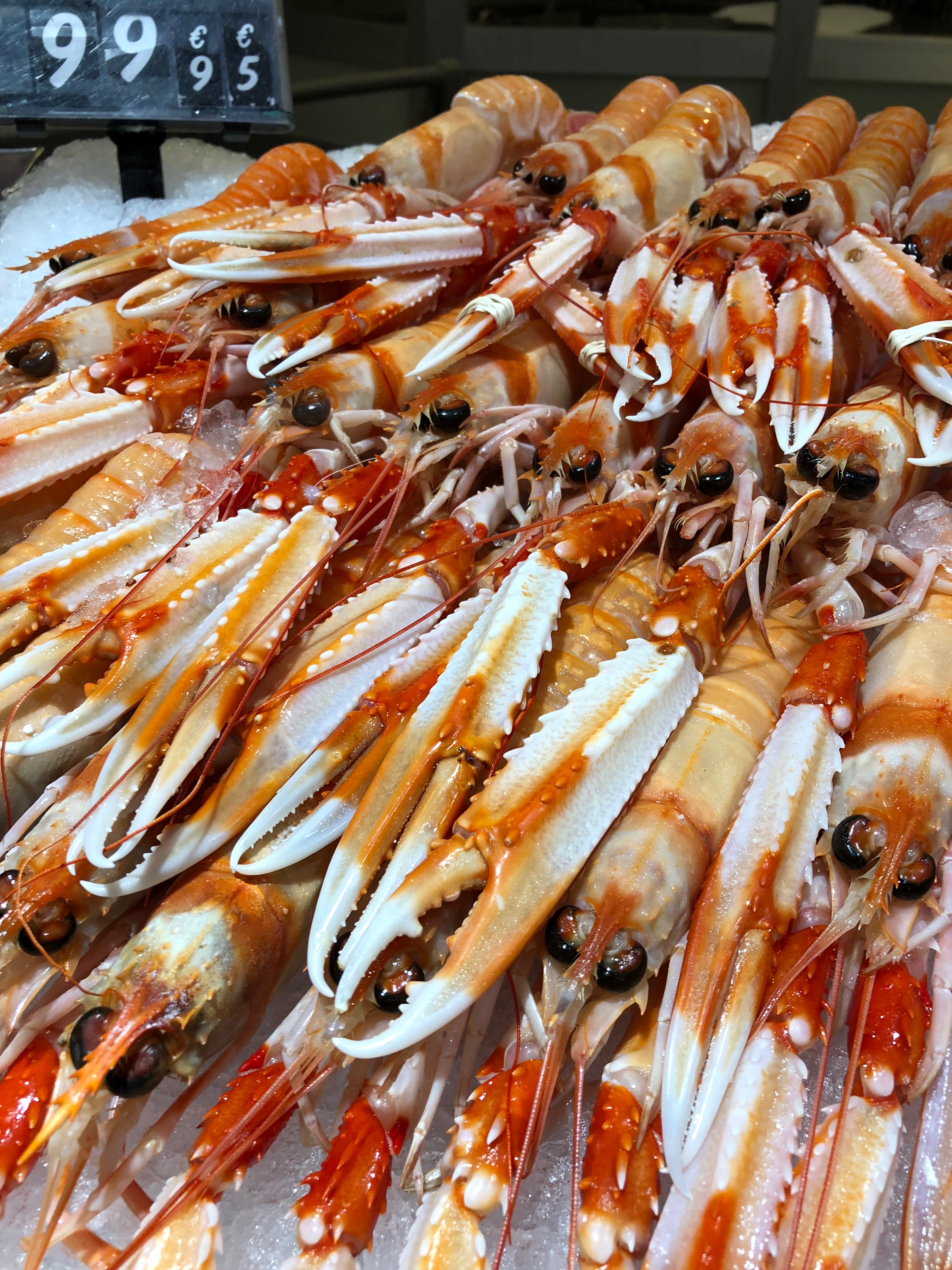 For a true Madrid tavern for tapas, El Anciano Rey de los Vinos is a worthy spot to try.  Located on a quiet street just a couple blocks from the Royal Palace and across from the Almudena Cathedral, the restaurant is over 100 years old. Here you’ll find traditional tapas made with pork, seafood, and cheese. There are also special dishes such as the Anciano Stew that includes pork, chicken, and pasta. Finish off the meal with their own Vino Dulce El Anciano, a sweet wine similar to port.  http://elancianoreydelosvinos.es/?lang=en 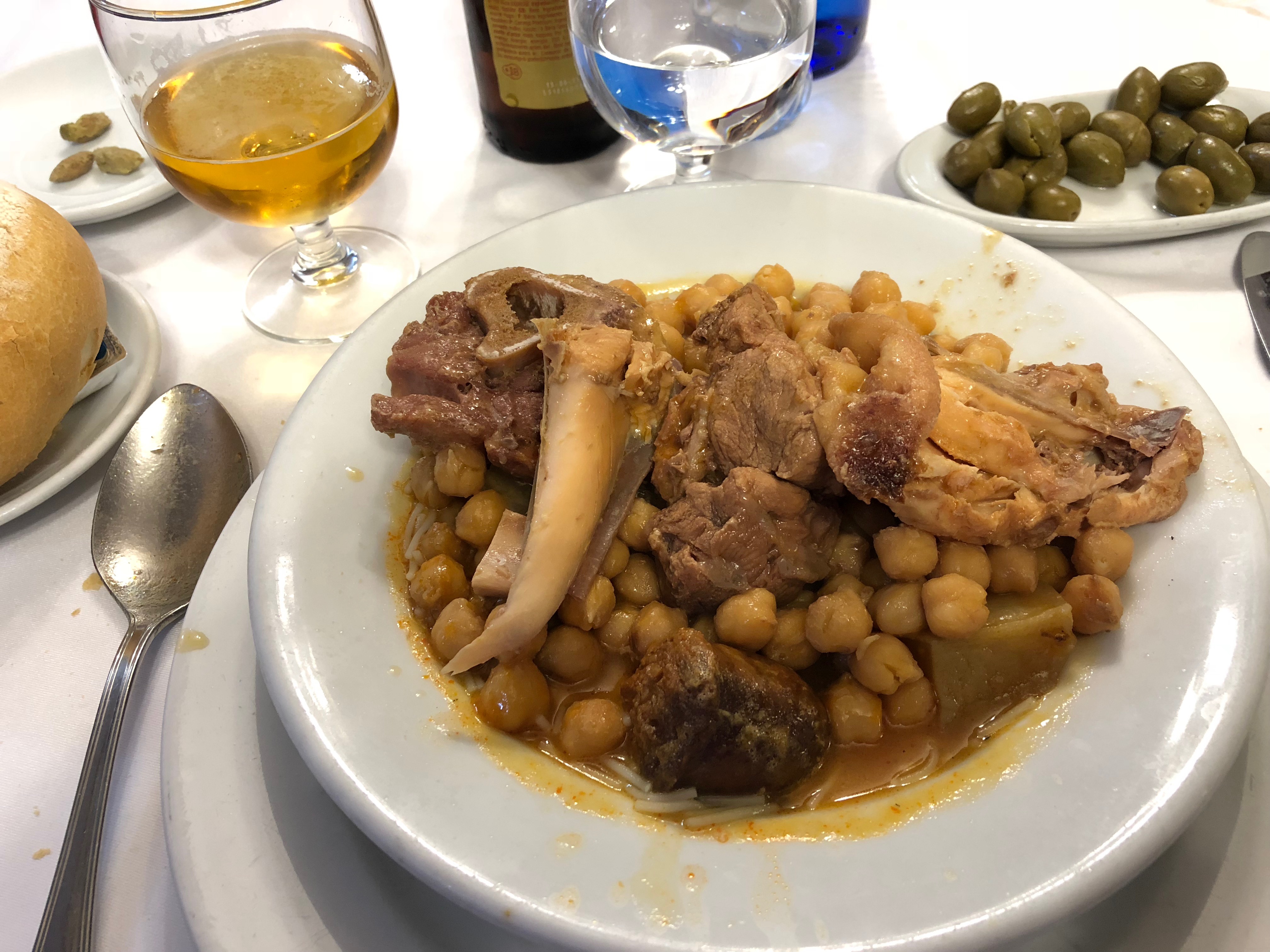 Even more traditional Spanish cuisine can be found at Posada de la Villa, which has roots going back to 1642. This legendary spot features hearty traditional cuisine such as suckling pig, braised oxtail, blood sausage, and a specially prepared grilled salmon. The specialty of the house is the lamb, roasted in a wood-fire oven, that is so tender that the meat falls off the bone. Be sure to save room for dessert. Their Fried Milk is a classic Madrid dessert that’s as good as it sounds. http://www.posadadelavilla.com 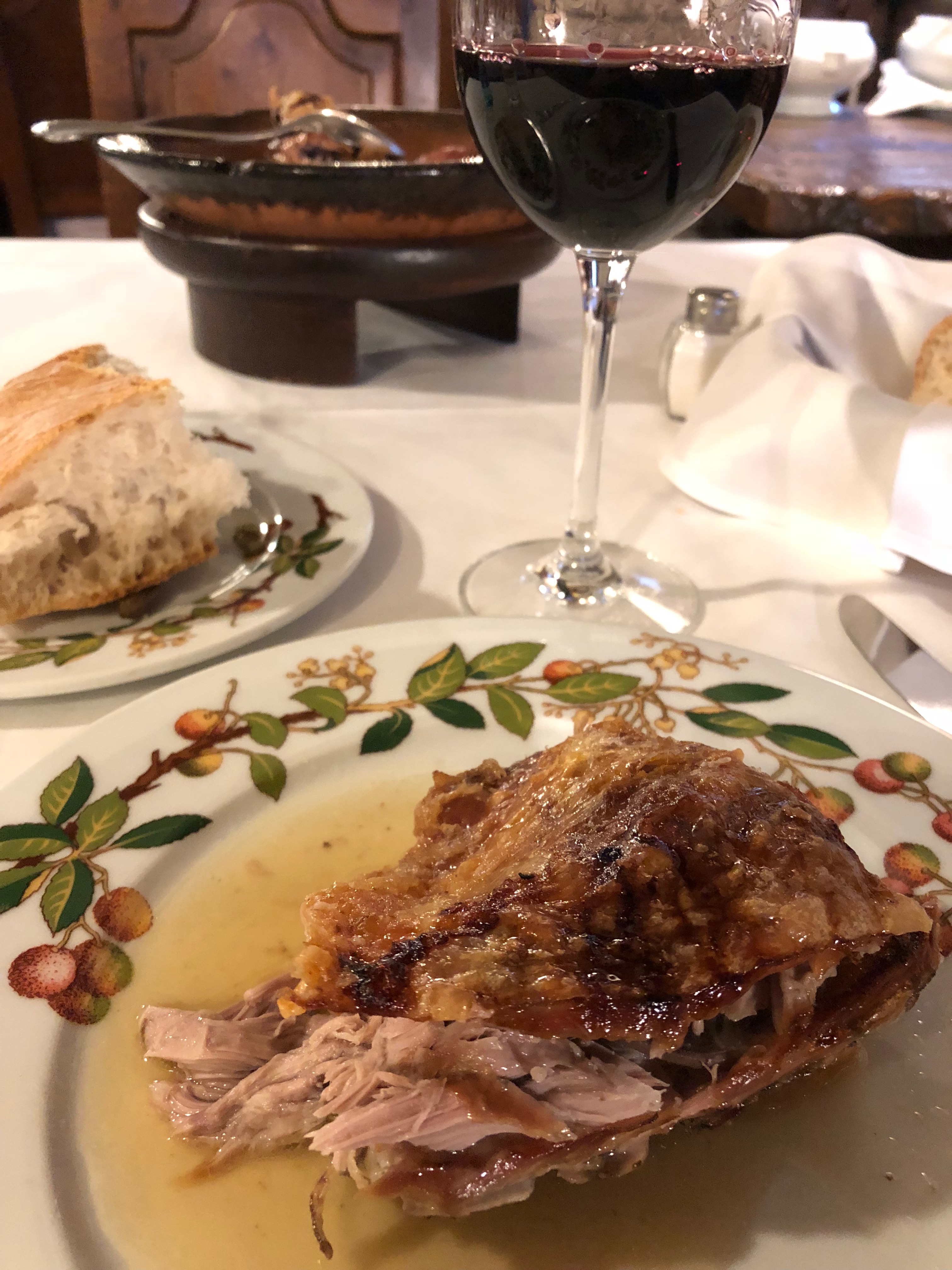 The top honor for a chef is to be awarded a Michelin star. There are only four cities in the U.S. with Michelin-starred restaurants: New York, Chicago, San Francisco, and Washington, D.C. Madrid is full of star chefs who have earned Michelin stars and are well-known throughout Europe.  One of those chefs is Javier Aranda, who has received two Michelin stars.

Aranda’s Restaurante La Cabra in the Chamberi neighborhood of Madrid is a spectacular destination. The amount of devotion to detail in each dish is clear upon the first bite. Highlights include the eel soup, with slices of creamed eel served in a thick pistachio and coconut milk cream. The steak tartare is paired with an accompanying cocktail served in a sea shell. Calamari-lovers will want to try the Bocata: delicious squid rings wrapped around a puffed pastry that’s stuffed with cheese. http://www.chefjavieraranda.com/en/la-cabra.html 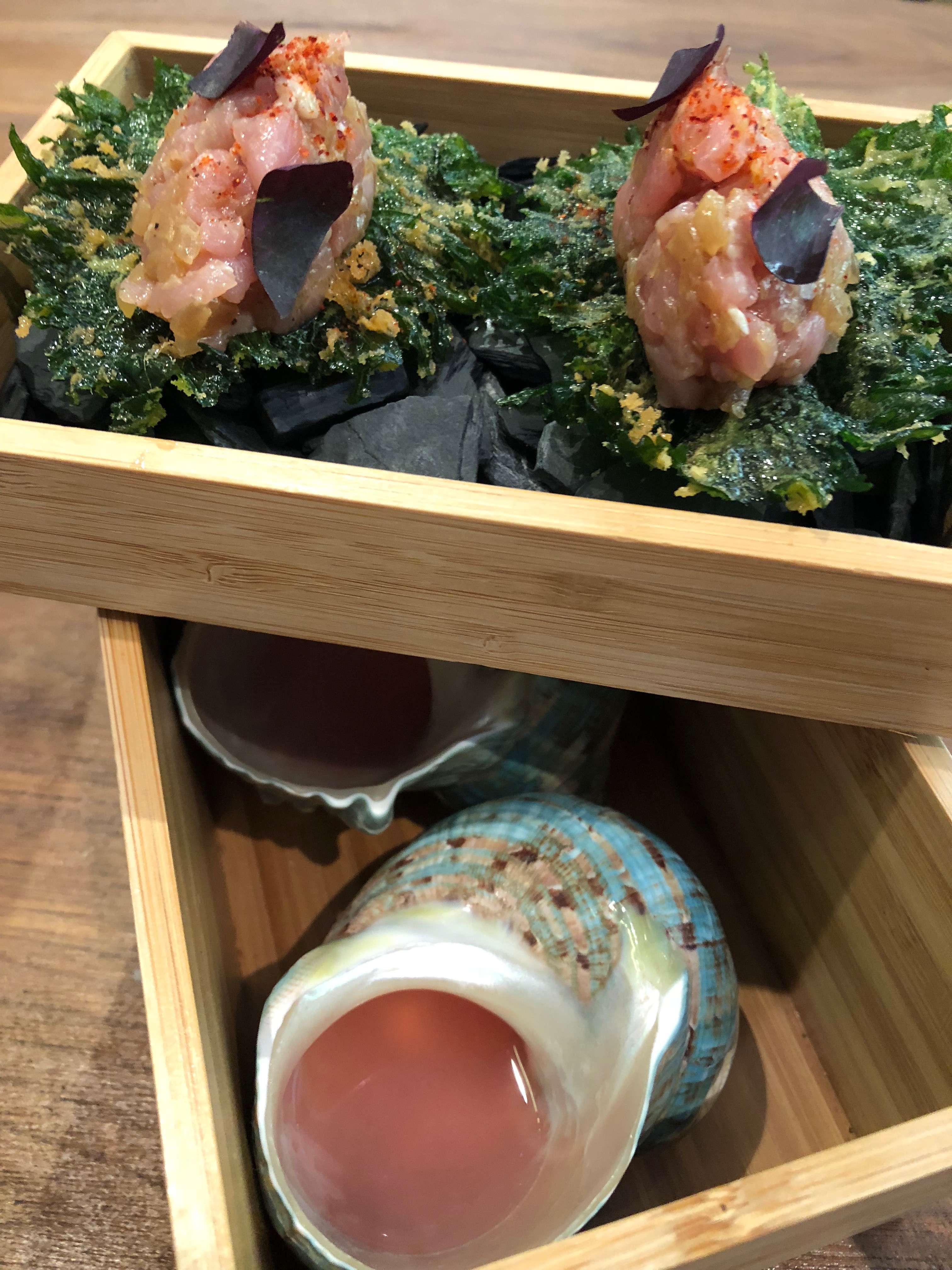 For the ultimate meal in Madrid, make a reservation at El Club Allard. The restaurant is located in the heart of Madrid, hidden away within Casa Gallardo, a stunning building with a modernist style built in 1908. The décor of the restaurant is classic without being stuffy, and the service is world-class. http://www.elcluballard.com/en/

El Club Allard has two Michelin stars and has received numerous other awards throughout Spain and Europe. These include the Eckart Award for Innovation from France and Best Restaurant in Madrid by TripAdvisor. Chef Jose Carlos Fuentes leads a kitchen staff that uses Japanese and Mediterranean influences and cooks with the finest, freshest seasonal ingredients. 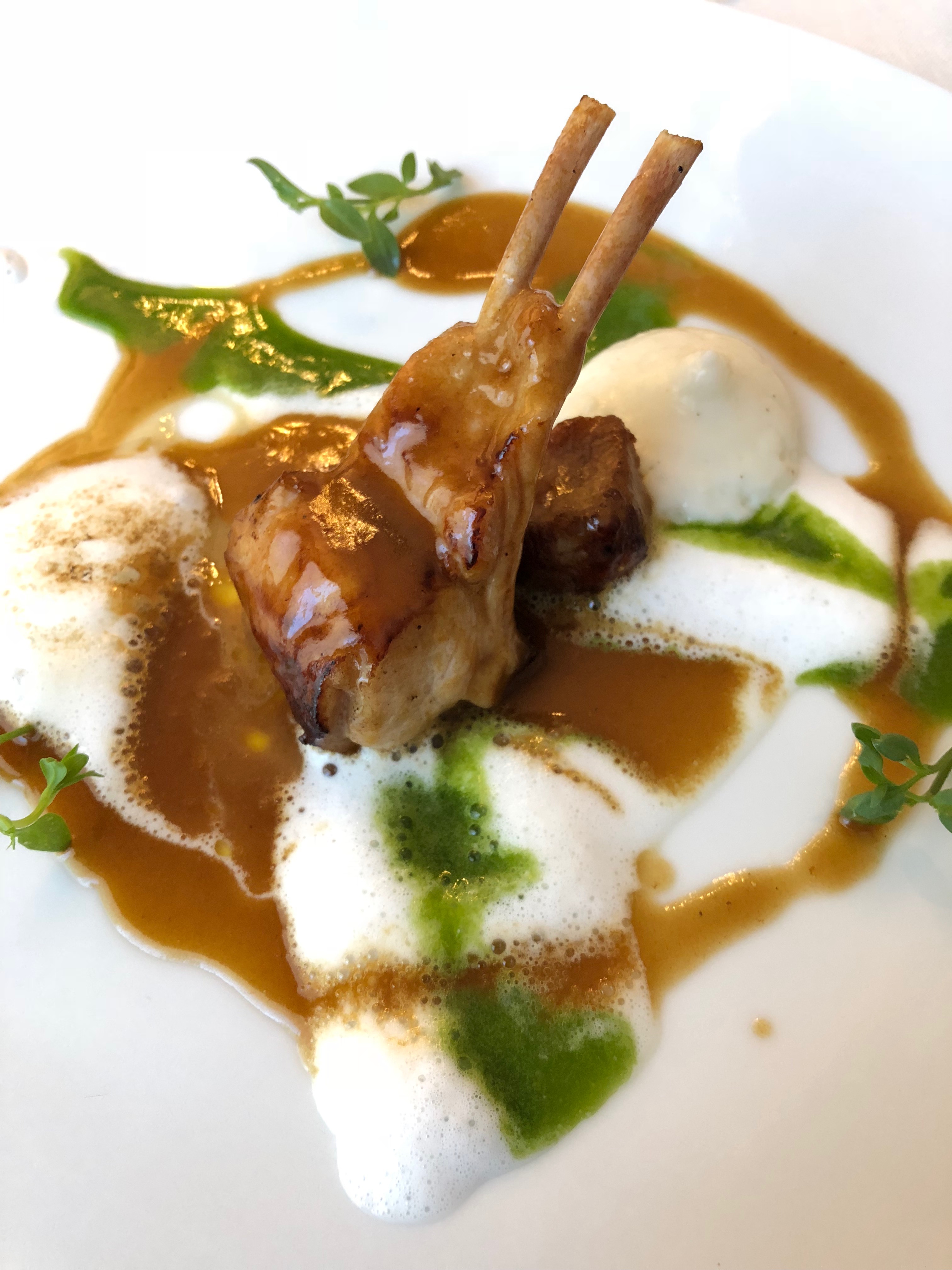 The restaurant offers two Tasting Menus, with the only difference between the two being the number of courses. Many of the courses are prepared table-side, and each course is a work of art. Highlights include the tuna crudo, octopus, goat, and smoked wild pheasant. Opt for the optional wine-paring that features eight wines to accompany each course brilliantly.  Desserts include petits fours and a mango sorbet made with sake and lime, which is light and refreshing while leaving you with the perfect measure of sweetness to end your meal. 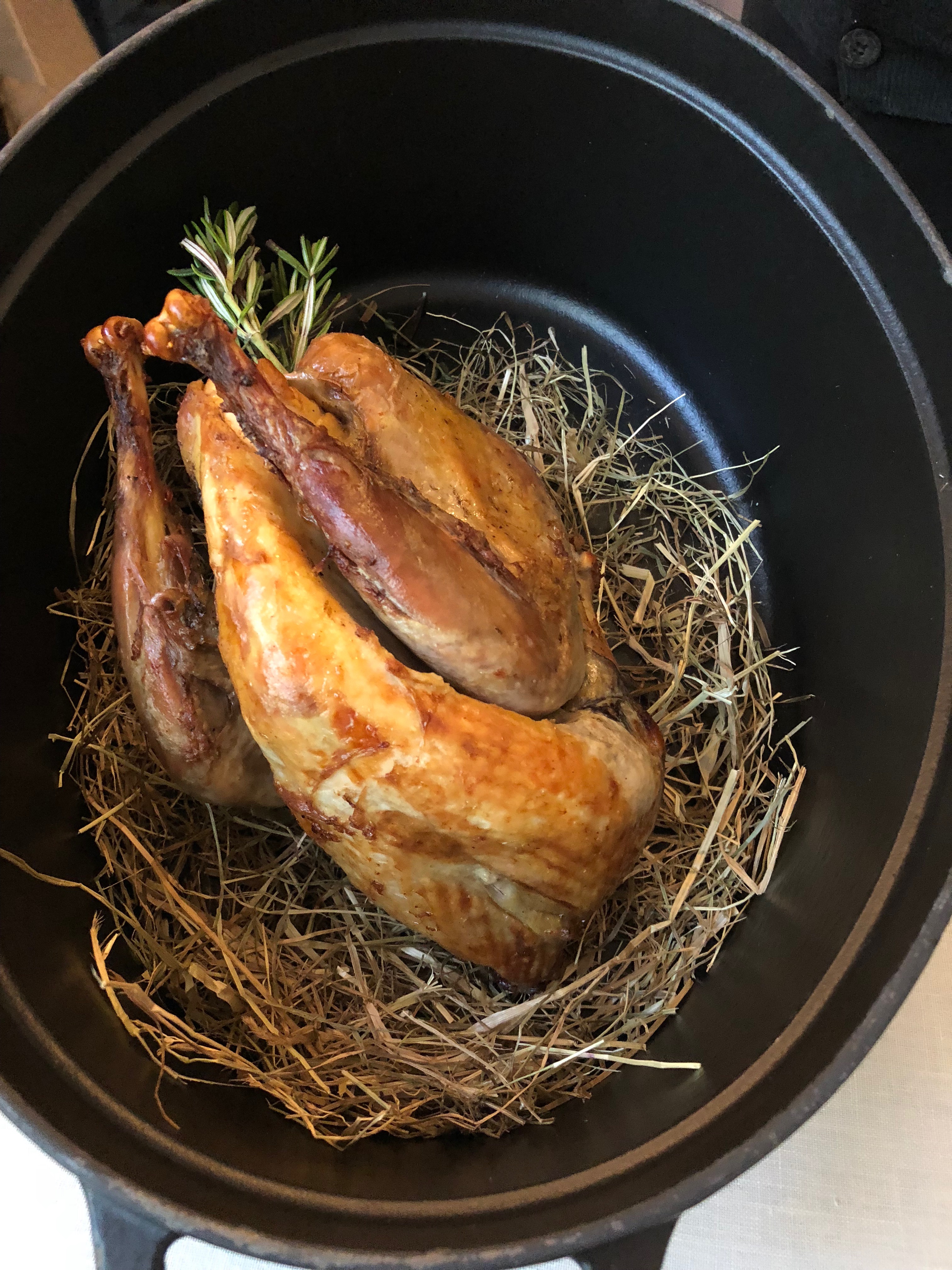