It's a beautiful Saturday afternoon as I enter the Pontchartrain Center to visit, "NOLA Gaming Fest", a gathering of local game enthusiasts who compete and socialize.  I move past the people outside, taking a break, squinting in the sun, before they dive back into play a variety of computer and board games.  Inside is a flurry of activity from teams of eGamers competing for trophies to merchandisers selling a wide variety of trinkets.  There's techno music pumping in the background and a large stage where panelists will soon be prognosticating.

I'm here to meet with the folks from High Voltage Software, one of the recent tech companies to locate offices in Louisiana, as a satellite of their main location outside of Chicago, IL. 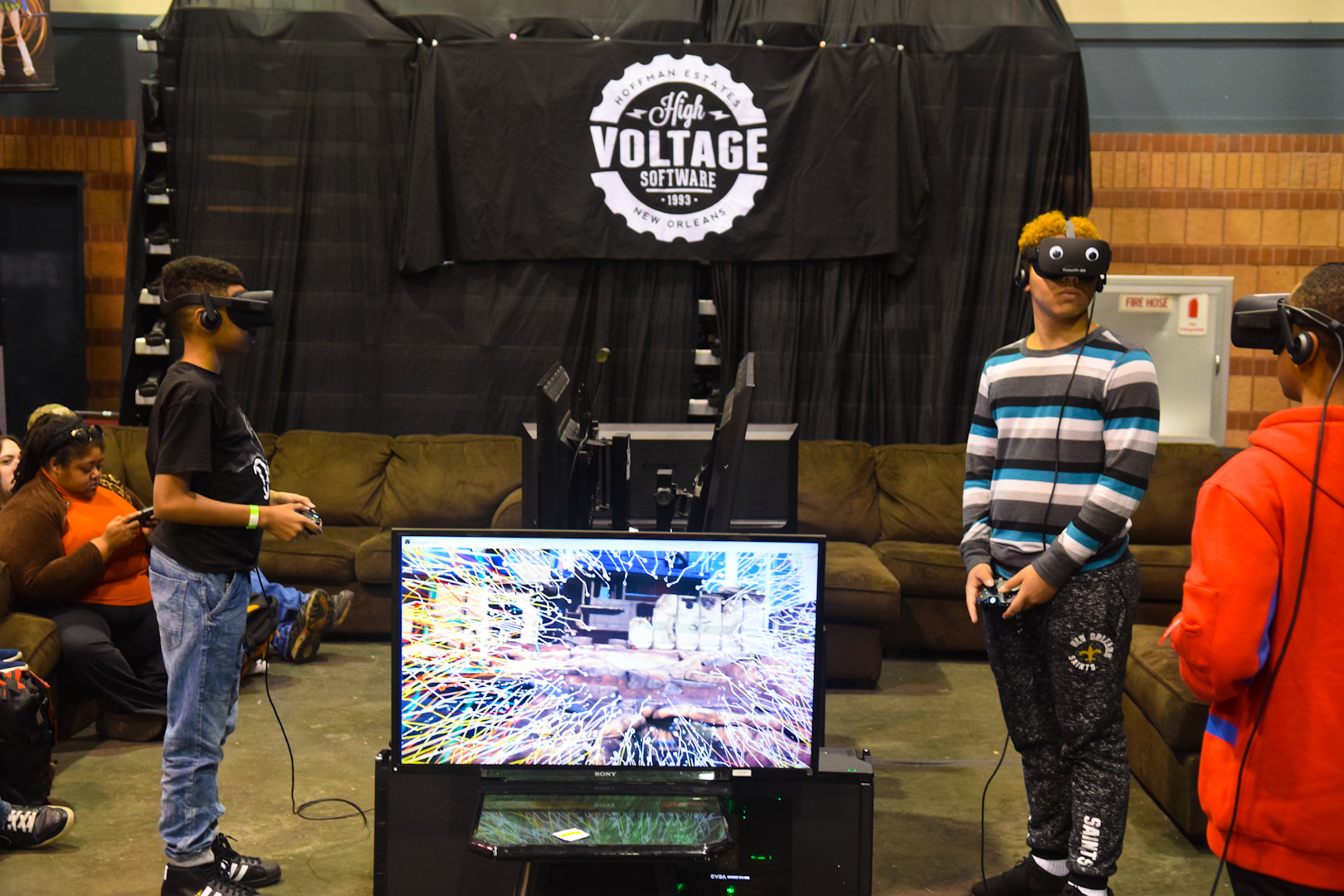 In a corner of one of the large rooms in the Convention center, they've created a cozy cocoon of modular sofa pieces which wrap around a series of large monitors in the center, showcasing the company's games and technology.  In front of each monitor, there's a person wearing a VR headset, cautiously or curiously twisting and turning, examining the contents of a virtual world, or blasting his way through a gauntlet of high-resolution enemies.  Other gamers sit on the couches relaxing and watching the player's perspective beamed onto the large screens.

Unlike other presences at the fest, High Voltage is here not just to promote its products, but to let enthusiasts know there's more they can do than simply play the games. They can help create them.

Claire Fontenot, High Voltage's "Community Manager", one of the twenty-one employees who currently work out of their New Orleans office, is one of the locals the company hired.  She stands behind a table filled with corporate swag and answers questions about the products but also lets people know, they're hiring.  Judging from the expressions on some of the gamer's faces when they're asked what they can offer the company other than as a customer, I can't help but think there are some who will leave the fest, with a sparked interest thinking they could have a career in this field.

I sit down with Dave Harnish, High Voltage's Studio Design Manager.  He's exactly how I'd expect a gaming design manager to look, dapper, dressed in black, long hair that's not ostentatious, with a touch of grey and a classic goatee that would make him fit in with either a superhero or villain alliance.  I'm not sure what his super power would be, but I imagine his fictional character's alignment as being chaotic neutral.  Just the kind of guy you’d want to create a script that would be interesting.

While only being in New Orleans for two years, High Voltage, as been around for twenty-four, and have shipped more than 95 titles including games in popular series like Mortal Combat, Injustice, and Saints Row.   The company is now releasing games for the Oculus Rift VR platform: Damaged Core, a first person shooter, and Dragon Front, a collectible card game.

Harnish says, "We historically moved into a lot of the emerging techs as they came out... When Oculus came to us with the opportunity to work in VR, we jumped at the chance... We're definitely interested in working with virtual reality."

When asked what initially brought them to New Orleans, tax credits "definitely helped" but interestingly enough, Dave says the company's Chief Creative Officer had his honeymoon down here and has had a long love affair with this area.  "It was an area we were already interested in, and once we had an opportunity to work with the government on establishing a presence here in the tech sector then it was kind of a no-brainer.", says Harnish.

So what kind of people work for a gaming company?  What are the essential disciplines?  The core talent of this gaming group falls into four main categories: production people who oversee projects and deal with clients and administration, designers who create content and scripting, artists who develop the models, graphics and imagery and programmers who tie all the technical stuff together.

Beyond merely setting up shop, High Voltage is working with local schools to help develop more skilled tech people for the local community.  One of the issues currently is that many area universities are not teaching the base systems some of these developers utilize.  C++ is very popular among game development, but not so popular in college curriculums.  There's hope that with more discussion between area businesses and the local educational community that students will have more resources locally that pander to tech companies like High Voltage.

It's hard to have any conversation about business development without the subject of the film industry's chaotic treatment by the previous governor's administration appearing, and when asked how insulated they are from any changes in tax incentives Harnish replied, "We've been fortunate enough to come into New Orleans at a pretty good time, and yea, some of the funding has changed. But we're here to stay.  We're looking very specifically to expand.  We were incentivized to come, no doubt by the tax credits, but we really love the area.  We love the city.  Our recruitment efforts have been met with a lot of success. One of the things I really like about the New Orleans area is that it's pretty welcoming."

I asked Dave if there were any "New Orleans touches" in any of the games as of yet, like perhaps a plate of beignets on a table in some scene, or maybe a brass band playing background music somewhere?  “I can never say never.  We definitely have some flavor going into game design that’s in development.  Half the team leadership for some games are in New Orleans… There’s always room for a little flair.  Absolutely you’ll see something.” 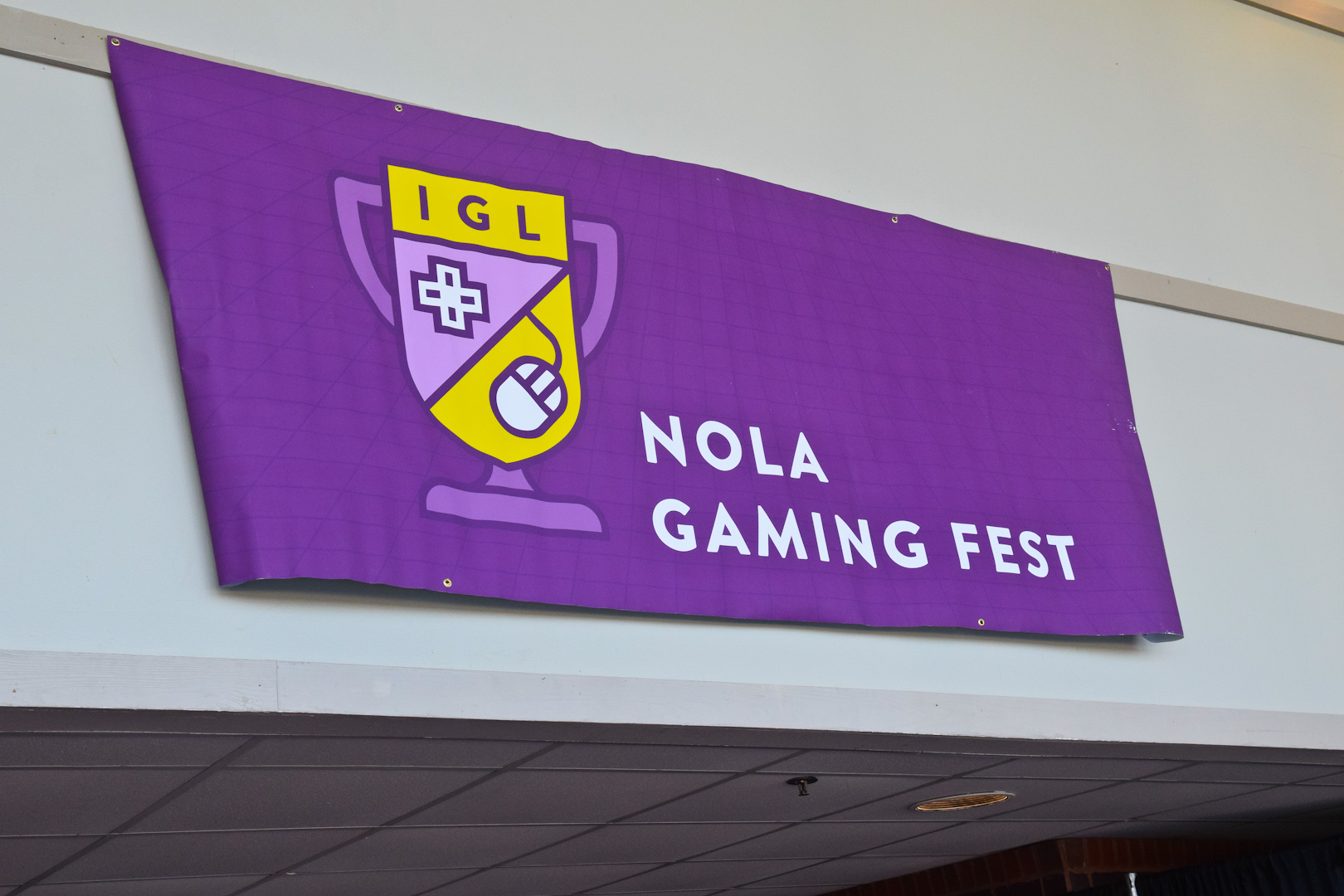 “The thing that High Voltage brings to the table that a lot of game companies don’t is that, for instance, I’ve been with the company for ten years.  And I am by far the most junior member of any of the managers here,” according to Dave, the model for the industry has traditionally been hiring/firing people based on contracts and business.  High Voltage has stuck with a core group of people for more than a decade and is interested in bringing people on staff for the long term.  “We like people to build careers with us; not just find a gig for a short term.”

High Voltage is just one of the many new tech companies that have set up shop in the New Orleans area.  We're very excited to see more of this.  We wish High Voltage best of luck!  Cheers to the future of the "Silicon Bayou!"