One cat, two cats … Bearcat Cafe, the super-hot brunch and lunch spot just off Freret Street, recently announced on Instagram that a second location in the CBD was imminent. The new location on Carondelet Street offers the same delicious breakfast and lunch menu as the Jena Street location, but with the bonus of dinner and a full-service bar upstairs, dubbed Rotary Ten, managed by the talented mix master Ryan Gannon. Who's a good cat? 845 Carondelet Street, (504) 309-9011, bearcatcafe.com

Shakin' thing up … New Orleans denizens no longer need to trek all the way to Metairie to get their burger fix now that Shake Shack has opened their first location on the edge of the French Quarter in Canal Place. In addition to their usual menu of burgers, dogs, shakes, and fries, the downtown locale also offers the Louisiana exclusive "Missi-chip-pi Fudge Concrete" and chocolate chip cookies from nearby baker and restaurant Willa Jean. 333 Canal Street, (504) 677-8001,shakeshack.com

Out of this world … Another taco joint, Galaxie Tacos opened in the GNO recently. Located in what formerly was a Texaco gas station designed by architect Walter Teague, the new taqueria emanates vibes from Mexico City and Oaxaca and, according to Eater New Orleans, makes its own masa for tortillas. Patrick Finney, who launched the restaurant and also is part-owner of the Franklin, has tapped Ken Jackson to manage the new digs, with Hank Shackelford as chef. Dive into fish tacos or el pastor, with the pork coming from Home Place Pastures, and other great dishes with green chiles from New Mexico and black beans and corn coming all the way from Oaxaca. Eventually, the new space will feature outdoor seating, expanding their dining space and giving folks the opportunity to sip their mezcal under the stars. 3060 St. Claude Avenue, (917) 455-9196, facebook.com/galaxie.tacos

They heard us! … After many pleas by local foodies for more restaurants serving Indian food, our prayers were answered. Turmeric Indian Cuisine recently opened up on the Westbank Expressway in Gretna, taking over the space that formerly housed Red Palace Chinese. From samosas, raita, and naan to tandoori, korma, and masala, this new spot for Indian cuisine just might be the stuff dreams are made of. Turmeric is open for lunch and dinner, Wednesday through Monday. 1025 Westbank Expressway, (504) 354-1422, tumericnola.com

Free the moon? … According to Gambit, a Ark-La-Tex-inspired restaurant recently opened in the Bywater on St. Claude Avenue. Located in a space formerly occupied by Shake Sugary, Luna Libre is a creation of Rhonda Findley that endeavors to bring the flavors of her hometown (Rose City, Arkansas) to New Orleans. The menu offers dishes such as carnitas, crunchy tacos, cheese dip, and migas, as well as breakfast tacos on weekend mornings. In addition to food and cocktails, Luna Libre also has live local music on Taco Tuesdays. 3600 St. Claude Avenue, (504) 237-1284, facebook.com/Luna-Libre-New-Orleans

Rappin' about ramen … Early last month, New Orleans-born rapper Master P launched his own line of instant ramen, sold by the Atlanta-based brand Rap Snacks. Unique flavors include creamy chicken and gumbo, prime rib, and Louisiana hot and spicy chicken. "If you ain't eating Rap Noodles then you shouldn't be eating noodles 'cause this is the best of the best noodles." rapnoodles.com

Eat your tacos! … Because there can never be too many taco joints, El Cucuy New Orleans has launched on Tchoupitoulas Street, mere blocks from the recently opened Barracuda. With a heavy metal theme, the new restaurant is specializing in a spinning rotisserie (trompo) with al pastor tacos and hand-made tortillas. Named after the Spanish version of the bogeyman that steals and eats children who misbehave, the new stand offers both inside and outdoor seating and lots of agave-based cocktails. 3507 Tchoupitoulas Street, facebook.com/elcucuynola

As always, the endless cycle of openings and closings have taken yet more victims. Most recently is the closure of two cafes by Revelator Coffee Co. The Bywater restaurant Paloma Café, on the corner of Louisa and Dauphine, has shuttered. Considering so many previous restaurants, such as Café Henri and Booty's Street Food, have been unsuccessful at this location, it seems to be cursed. Revelator Coffee Co was forced to close its coffee shop located at the American Can building in Mid-City. Thankfully, the location on Tchoupitoulas remains open. 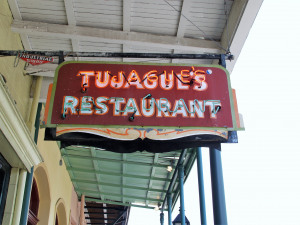