In the new comedy Lazy Susan, actor Sean Hayes--of Will & Grace fame--plays a woman named Susan who has pretty much given up on life. She is an unemployed slob who constantly borrows money from her mother (Margo Martindale). And it isn't lost on her brother (Kiel Kennedy) that she is extremely self-centered. Things look up for Susan, however, when she begins a romance with Phil (Jim Rash), the owner of an indoor trampoline park. Of course, Susan uses this positive turn of events to toy with her long-time rival Velvet (Allison Janney).

You can guess that lots of funny and embarrassing situations happen to Susan. Even some downright bad things happen to Susan, but you feel for her, because Hayes and co-screenwriters Carrie Aizley and Darlene Hunt don't treat her with contempt, like you would see in the average Adam Sandler "comedy." They love their central character. That is partly what makes this movie work.

Hayes's performance also helps the film immeasurably. He never overplays it--like, "Look at me, I'm a man in drag." He's playing a woman, and that's it. She's unkempt and unmotivated, but still a woman.

Lazy Susan is now on digital and on-demand. 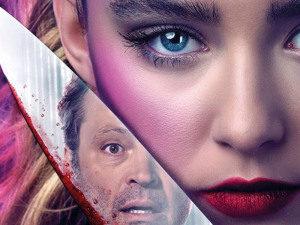