Cream of the Crop: The Best Creamy Cocktails for the Holidays 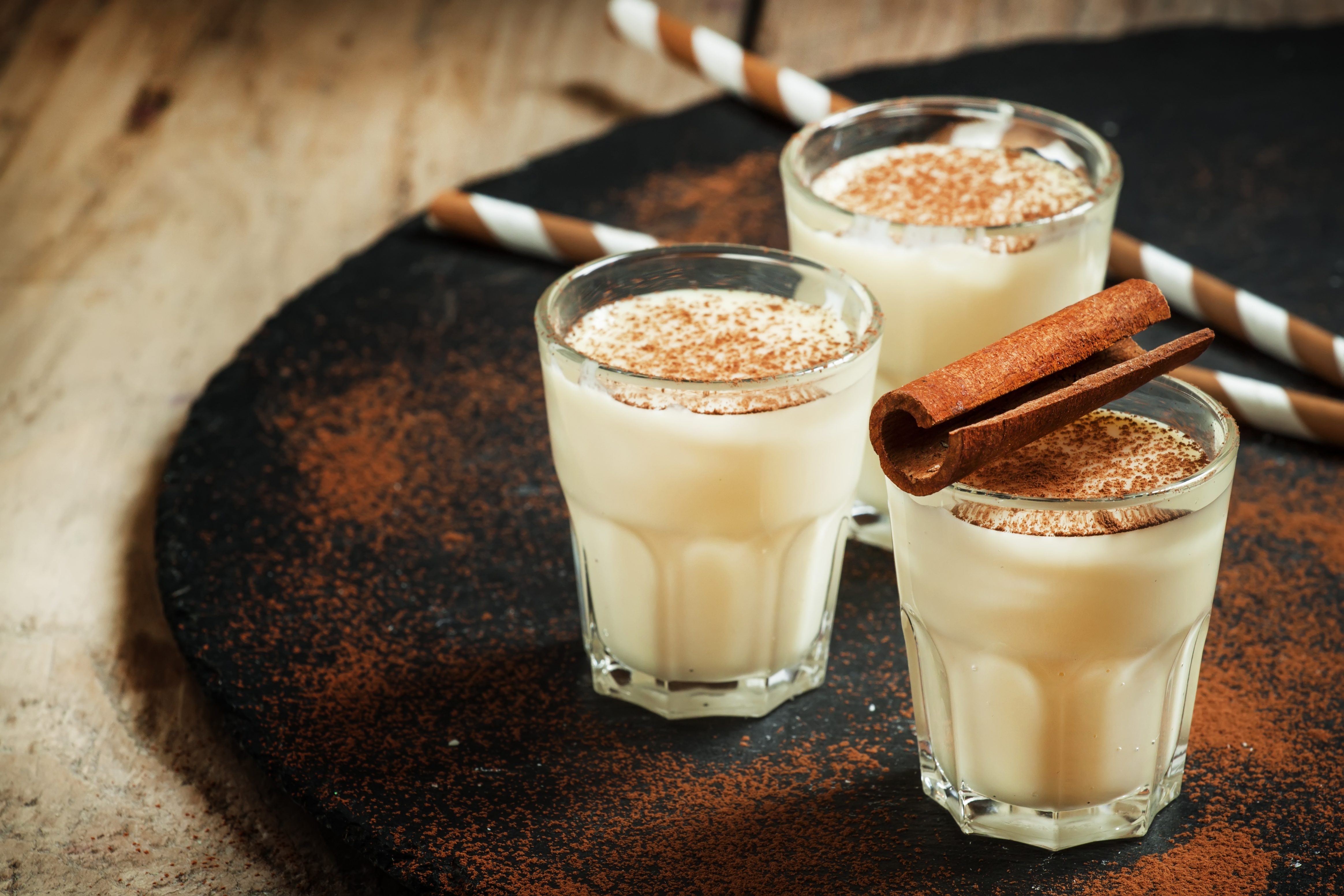 Contrary to popular belief, it does get chilly in the South in the winter. We may not have mountains of snow to plow through, but we do have bouts of bone-chilling winds and sleet-filled rain. Just like our northern neighbors, we seek out libations that help to warm us from the inside. Cream-infused cocktails are most often the go-to drinks during the coldest of months, but you can imbibe a tummy-warmer like one of the following any time of year. 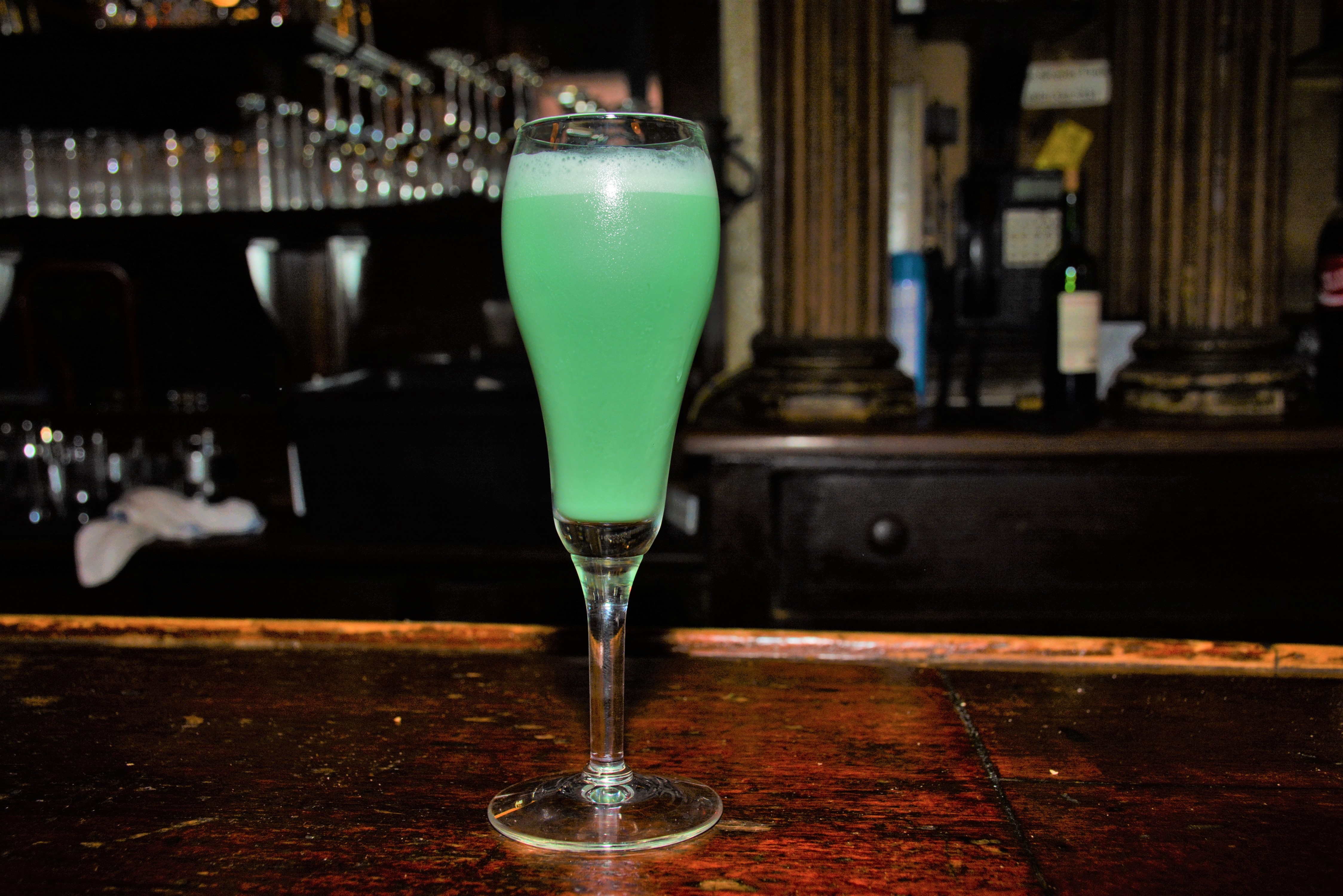 There are quite a few cocktails around town that have been charming drinkers for decades, and in some cases, for even more than a hundred years. The Grasshopper at Tujauge’s (pictured above) is a delightfully colorful drink that locals swear by. The eye-catching cocktail is a mix of green crème de menthe, white crème de cacao, and light cream that is shaken to frothy perfection. Bourbon House’s Frozen Bourbon Milk Punch has been deemed the best bourbon milk punch in the city by aficionados. The rich drink is crafted with Old Forester bourbon and delectable vanilla ice cream. 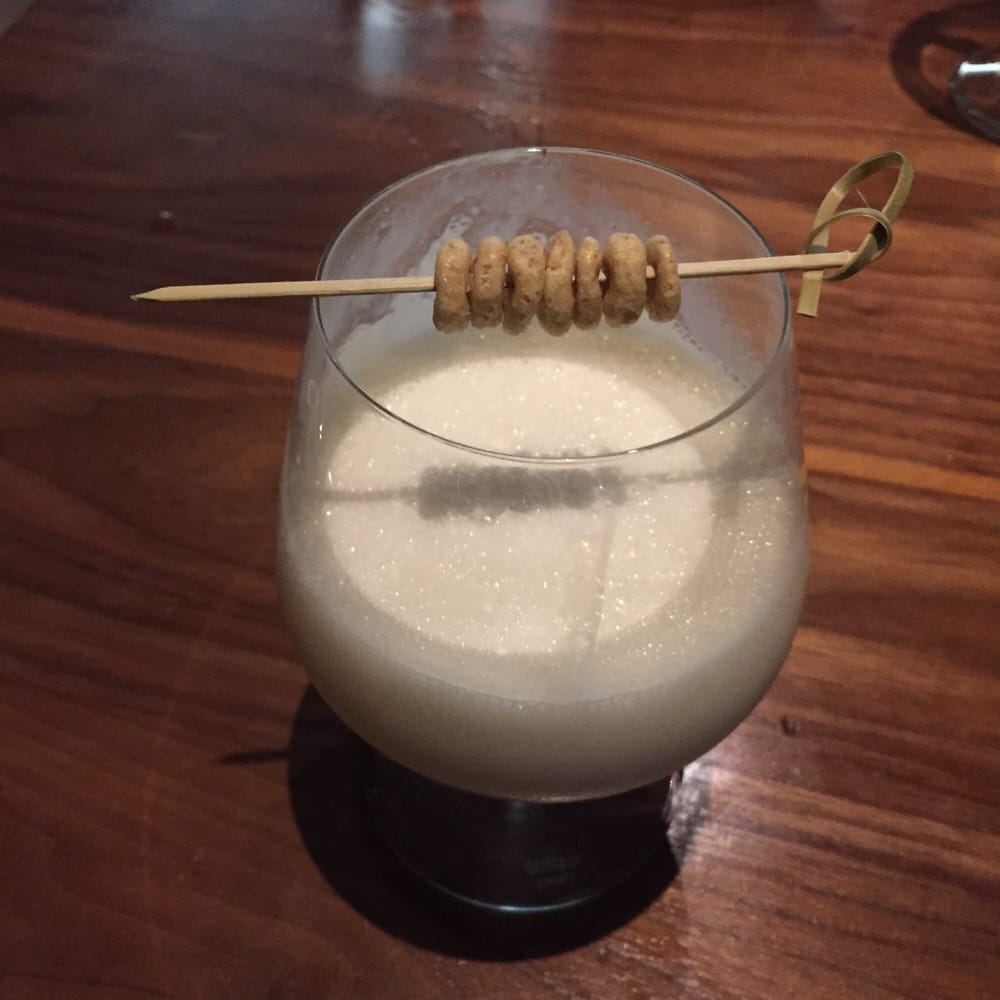 Be careful, because the Honey Buzz Milk Punch at SoBou ​(pictured above) can be seriously addicting. The drink is a tantalizing mix of Honey Nut Cheerio-infused rum, honey syrup, holiday pie bitters, and milk. It’s like breakfast and a cocktail all in one. Saba also has a fun punch that you may want to try out. The Not Your Paw-Paw’s Punch includes overproof rum, cognac, Baharat spices, pineapple juice, and whey.

Cane and Table is known for their tropical drinks, but the Roman Punch gets more attention when things cool off. You’ll be thinking of Thanksgiving with this drink’s mixture of raspberry, citrus, rum, and cognac, which is then topped off with toasted marshmallows. 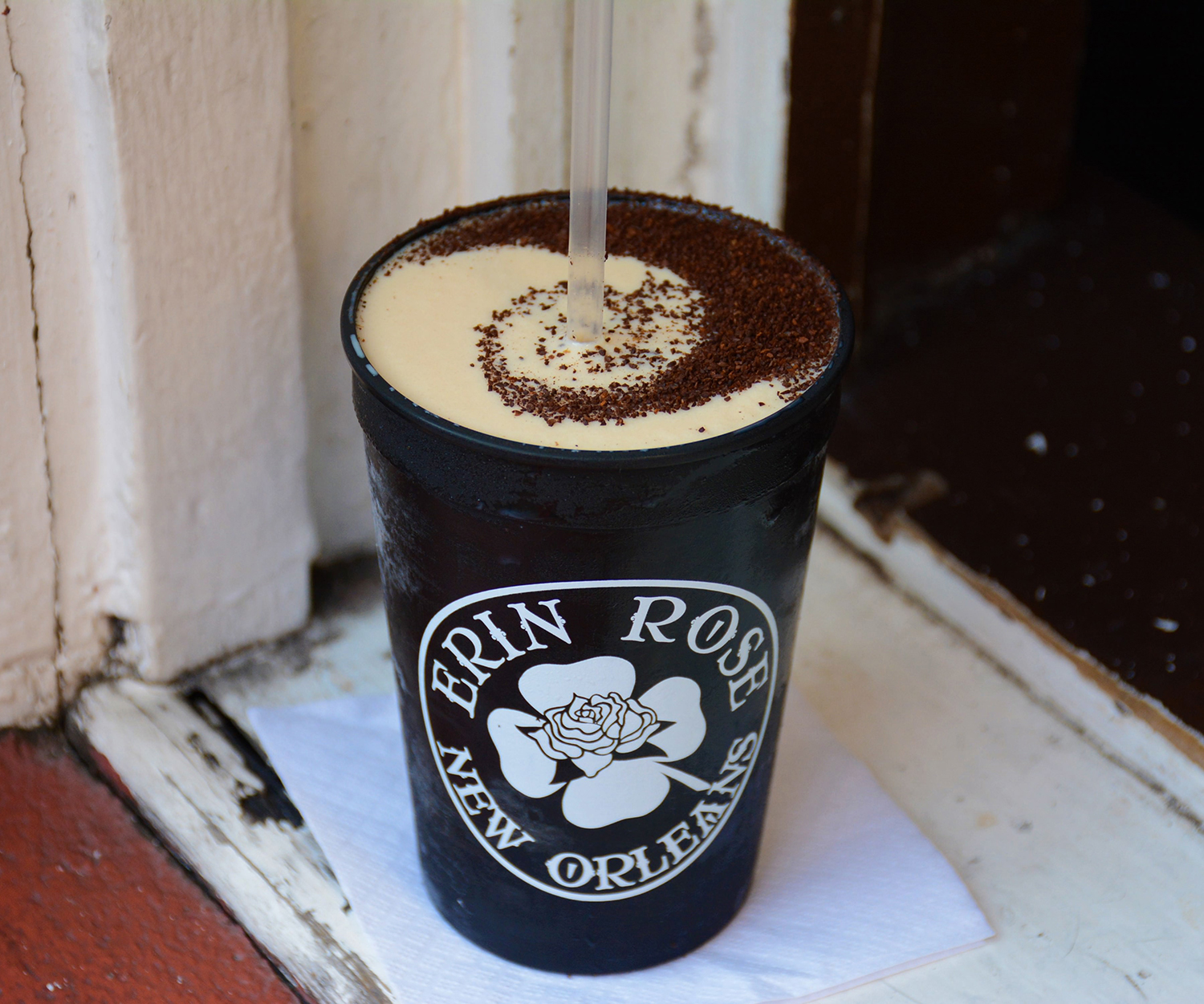 Coffee cocktails that come hot, iced, or frozen are always popular winter cocktail options. You can enjoy the Frozen Irish Coffee drinks at both Erin Rose ​(pictured above) and Molly’s at The Market all year long. If you head down to Oretha Castle Haley, stop at Toups South to sample the Hiiii Byeeee, which is made with Stiggin’s pineapple rum, coconut rum, coffee liqueur, and BarSol Pisco.

For those who like things extra chilly, Gene’s Daiquiris makes an amazing White Russian daiquiri just for you. If you’d prefer that cocktail in a more traditional fashion, the expert mixologists at Longway Tavern on Toulouse Street make a hell of a Caucasian, with Wheatley Vodka, Kahlua, and cream. Maypop has a few frozen treats on tap, including The New Fashioned with citrus-infused Mount Gay Rum, Bittermens Orange Cream Bitters, and Angostura Bitters.

Many creamy cocktails are served up like a dessert dish. In Lakeview, Sala combines Godiva Chocolate Liqueur with Bailey’s Irish Cream Liqueur and vodka for their Chocolate Martini. If you’re on Harrison Avenue, a frozen Brandy Alexander at The Steak Knife is an amazing after-dinner drink. Cookie-lovers may want to seek out the Snickerdoodle Martini at Vitascope Hall, located inside the Hyatt Regency New Orleans hotel. The combination of Praline & Cream Liqueur and Fireball Whiskey comes topped with whipped cream. 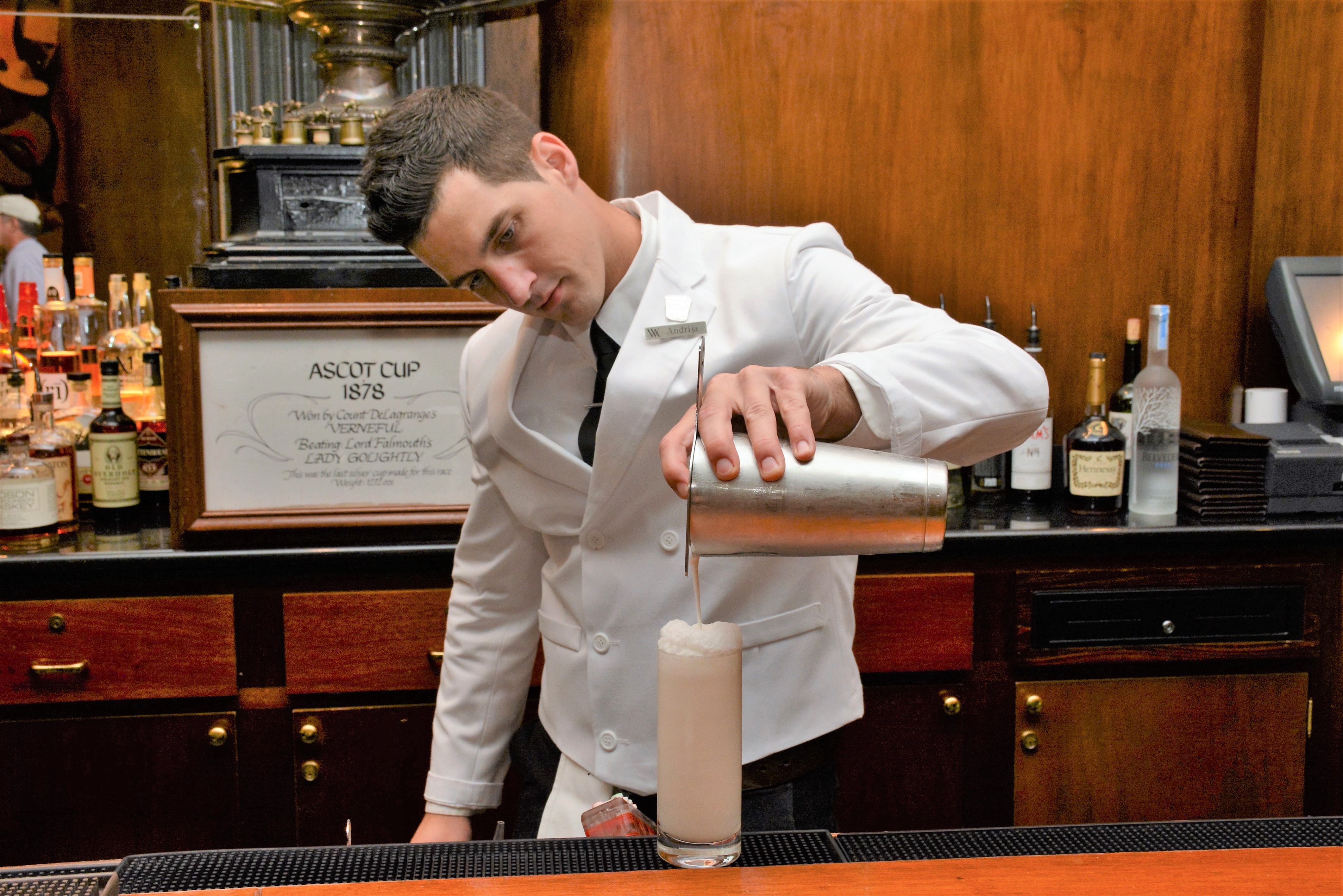 You’d be hard-pressed to find a bar in this city that didn’t include a Ramos Gin Fizz on the menu. The fizzy, milky drink was invented by Henry C. Ramos in 1888. He was the owner of the Imperial Cabinet Saloon, and the cocktail had bartenders dedicated just to crafting it because it was that popular (and that time-consuming to make). Famed Governor Huey P. Long even flew a New Orleans bartender out to New York, where he often traveled, so that he could teach some bartenders how to properly make the beverage. While Ramos’s bar is gone, we can still enjoy the fruits of his labor. The Sazerac Bar in the Roosevelt Hotel ​(pictured above) has been making this drink for decades, using Hayman’s Old Tom Gin, lime and lemon juices, sugar, orange flower water, egg whites, and cream.

Sylvain in the French Quarter has a full menu of cocktails available during brunch, and the Old Timer’s Breakfast is as humorous as it is delicious. It’s a mixture of Cathead Pecan Vodka, Galliano, Ristretto, half and half, turbinado sugar, and nutmeg.

A great creamy cocktail can help warm you up and make you feel as full as you would after a massive holiday dinner.

The venues mentioned above are located at the following addresses:

This week, Glenfiddich launched a new campaign, titled "Glenfiddich Family Recipes," and it aims to provide aid to benefit those struggling as a result of Covid-19. The campaign works primarily through donations to a charity called World... 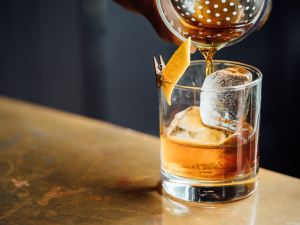 The Only New Orleans Bar Guide You'll Ever Need

5216 Table & Tap 5216 Veterans Blvd., Metairie 766-1417 You can't get lost on the way to this Metairie favorite. The address is in the name! They offer sock-hop-style seating, pub comfort fare, and pool. Drink Specials, Food, Pool Table
Alto (Ace Hotel) 600 Carondelet St. 900-1180 Offering fantastic drinks and a stunning view of the New Orleans skyline, Ace's rooftop bar Alto is a... 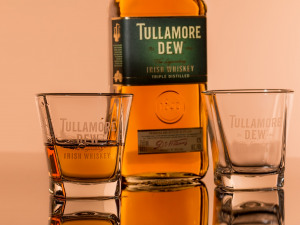 Get in the Spirit This Father’s Day

With Father's Day fast approaching, you might be wondering what to get the old man this year. For the dads that definitely don't need another grill set or tie, here's a guide to some more spirited gift ideas. For the old-school dad who is still trying to figure out his iPhone: The Balvenie Double Wood 12-Year-Old This 12-year-old single malt is a great gift idea for any dad who is...