$20 and Under: Thrilled to Pizzas

Enjoying pizza is easily one of America's favorite pastimes. Just saying the word can conjure up fond memories of pizza parties after playing a grueling game of softball under the hot summer sun, family night with movies with a pie delivered fresh and hot to your door, or brain fuel for late-night cram sessions in college. I'm willing to bet that the mere mention of pizza lights up pleasure centers in our brains and summons phantom aromas of melted mozzarella, tangy tomato sauce, and crisp, chewy crust.

Over the last decade, the pizza scene in New Orleans burgeoned, drastically increasing our options for incredible pies-from the New York-style slices at Pizza Delicious to the wood-fired pies at spots like Ancora and Pizza Domenica. More recently, we've seen another surge in our offerings, much to the city's delight.

***As of late July of 2019, the popular Italian pizza joint Bonci opened its third U.S. location (the other two are in Chicago) in the Warehouse District. Housed inside The Julia, Bonci serves pies "al taglio," which they take most literally. Instead of slices or round pies, pizza-goers purchase a rectangular slab by the cut and are charged by weight. What is offered is always changing, but recent varieties include roasted mushroom and sausage, prosciutto and mozzarella, provolone and white beef ragu, and spicy eggplant. They also serve suppli-basically breaded and fried rice balls stuffed with herbs, tomato sauce, and mozzarella-a popular Roman-style street food. Grab a slab or two of your favorite flavors, a specialty soda like Brooklyn's Bruce Cost Ginger Ale, and you're good to go … under budget. ***(Note: Bonci is permanently closed)

Speaking of slabs, if you are looking for a lot bang for your buck, head to the 'burbs for a slice of Fat Boy's Pizza. Located in the same complex as Shipley's Do-Nuts on Metairie Road, Fat Boy's tagline is "size matters," an all-too-obvious motto once you get a load of their 30-inch pies. They do sell their pizza by-the-slice, and it's a good thing because one wedge is almost as big as a personal pizza in other spots. The slices start at $6.49 for their "original cheese." A hefty list of appetizers are also offered, including typical pizzeria fare, such as mozzarella sticks or chicken wings, and a few that are not-so-typical, like jumbo, Bavarian-style pretzels served with beer cheese and spicy brown mustard. Plus, their dessert menu is not at all shabby, featuring the ubiquitous New Orleans bread pudding and zeppoles (Italian donuts) dipped in powdered sugar and cinnamon and served with melted butter.

Not too long ago, a pizza joint took over a spot in the Warehouse District that formerly housed another pizza joint. In the place of Wood Pizza, a restaurant dubbed Rye & Pie has blossomed-featuring wood-fired pizza and, as you could probably have surmised, an assortment of rye whiskey. Plant yourself at the bar, or at a table on their large patio, and enjoy pies like spinach and artichoke; fig spread, goat cheese and prosciutto; or a simple pepperoni. They also offer salads, like chopped spinach and quinoa, and meatball sandwiches.

Enjoy your art and eat it, too, at the Rampart Treehouse--a pizzeria, bar, and art gallery on North Rampart Street. This funky French Quarter restaurant keeps their menu simple by serving "specialty" 18-inch pies, a couple of basic salads, and a vegan sandwich dubbed "Praise Seitan." They also offer a vegan pizza dubbed "Hail Seitan," topped with Zapp's Voodoo Chips. (In case you were wondering, seitan is a high-protein vegetarian foodstuff made from cooked wheat gluten that resembles meat.) Pies at Rampart Treehouse range from a simple cheese pizza with mozzarella and marinara to an "Elote" made with roasted corn crema and chipotle adobe sauce.

Though not quite in the same category as the previous spots mentioned, Sofia NOLA is worth acknowledging. The restaurant opened earlier this year in the Warehouse District, right next to the Auction House Market on Julia Street. Sofia NOLA was what happened when local Billy Blatty, the owner of Barcadia, got together with Denver's Culinary Creative Group. Named as an ode to actress and singer Sophia Loren, this traditional Italian restaurant tapped Talia Diele as its executive chef, and she is doing a spectacular job. Most of the menu consists of dishes like house ricotta with clover honey, octopus with 'nduja (a spreadable pork salami) and purple potatoes, and blue crab risotto. There are also several wood-fired pizzas (and gluten-free crusts on request). Bring a friend to split one, as they are definitely on the higher end price-wise, or eat one all to yourself like the "Signore Bianco" with stracciatella and grana padano cheese, creamed leek, green olive, and fennel pollen. An adventure worth taking even though drink, tax, and tip will push the price a bit over the edge.

It's a sweaty Saturday in New Orleans and from the air-conditioned safety of your couch, you hear the dreaded ice cream truck draw near. "Hello!" The kids magically appear before you, summoned from the depths of a video game stupor, begging for the cash to get a frozen treat from... 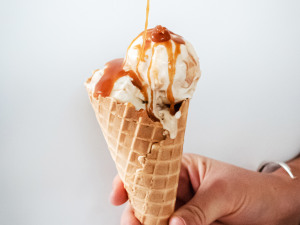 Most everyone has childhood memories of going to the ice cream parlor on a bright summer Saturday, pressing your nose to the glass, waffling about which flavor you'll choose, though you know you'll eventually settle on a tried-and-true favorite. It's hard to forget that singular moment when the girl behind the counter reaches over the glass to hand you the cone, your eyes widen as you grasp the top heavy (one scoop or two?) confection,... 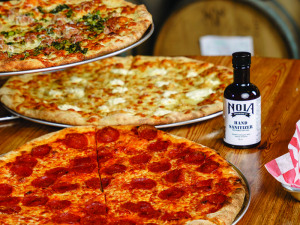 [@onlypans] In this brave new world of food, where dishes that withstand the rigors of takeout and delivery rule, it's really no surprise that so many local purveyors have jumped on the pizza bandwagon. Even pre-pandemic, pizza has always been the perfect take-home or order-in kind of item. Who remembers going to the pizza parlor with mom to pick up dinner, riding home in the car with the...