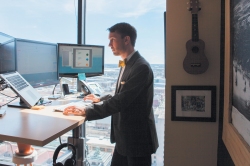 Gravity, the natural phenomenon that gives weight to physical objects, described eloquently by Monsieur Einstein in the General Theory of Relativity as a consequence of the curvature of space-time. The strength of gravitational fields can slow the passage of time and, much to the chagrin of the female sex, sag things once perky. When applied to the science of diet, posture has an effect on digestion. The gut pains one experiences post meal are a direct result of poor gastrointestinal function partly, if not solely, caused by the physical positioning when dining.

Coming October 1, Superfood Bar will be ending it's nine year run of serving delicious and fresh superfoods to the New Orleans community. Situated conveniently close to the intersection of Napoleon and Magazine, Superfood Bar provided a healthy and colorful option for...

Sweat it Out: The Best Workout Classes in New Orleans

New Orleans-known for beignets, cocktails, and po-boys-is not usually recognized for its health scene, but over the past five years, niche workout studios have been popping up throughout the city. These specialized classes create an engaging, high-intensity workout, as well as a close-knit community among the clientele. Consider stopping by one of the studios to shed the king cake weight and get into shape this...