Less than 10 years ago, it was not difficult to recognize an authentic New Orleans po-boy. Fillings ranged from sloppy roast beef and debris with gravy to fried shrimp, catfish, oyster or soft-shell crab. There’s hot sausage po-boys (Patton, of course), hamburger po-boys and even French fry po-boys smothered in brown gravy, all dressed with mayo or butter, lettuce, tomatoes and even the hotly debated sliced pickles nestled in a Leidenheimer or Dong Phuong bun.

But now it’s time to take another look. Some of the po-boy’s evolution can be credited to the culinary genius and competition that has erupted over the past nine years at the Oak Street Po-Boy Festival, held this year on Sunday, November 22. Most of the mouth-watering ingenuity we see today is due to talented chefs offering their take on the world-famous po-boy, incorporating all of the delicious ingredients we in Louisiana have long had right at our fingertips. One of my favorite po-boy incarnations is the Breaux Bridge Benedict Po-Boy at Stanley. Located on a corner of Jackson Square on Chartres Street, Stanley has been a go-to breakfast and lunch spot for tourists roaming the French Quarter for over five years now. Regardless of its age, this sandwich is certainly not served wrapped in butcher paper. Instead, expect an open-faced presentation with poached eggs perched atop a patty of house-made boudin, Chisesi ham, American cheese and Leidenheimer French bread draped with a tangy Hollandaise sauce.

Just as folks were beginning to get used to the idea of an eggs Benedict po-boy, along came local chef Camille Boudreaux and his wife, April, with Killer Po-Boys, offering a unique perspective on the time-honored sandwich. Boudreaux and his wife opened this insanely popular kitchen installation inside the Erin Rose bar in late 2012, and are preparing to open a second location all their very own on Dauphine Street. There, you can try everything from a seared Gulf shrimp po-boy with marinated veggies to a grass-fed meatloaf po-boy, but recently what’s made me all agog is their roasted sweet potato po-boy with black-eyed pea and pecan spread, pickled shallots and wilted greens. Who knew vegetables could be so delicious?

All the way across town in Mid-City, chef/owner Micheal Gullotta of MoPho (formerly the sous chef at John Besh’s flagship Restaurant August) has blurred the lines between Vietnamese and Creole cuisine. Though formally known as banh mi, New Orleanians have long been calling these inexpensive yet delicious sandwiches Vietnamese po-boys, and MoPho is no exception, featuring special “po-boy” creations that combine the best of both worlds. One popular po-boy manifestation on their menu is the Cast Iron Tofu with black bean mayo, pickled vegetables, jalapenos, fresh Vietnamese herbs like basil and mint and chicken liver pâté.

There’s another newcomer to Mid-City dubbed Bevi Seafood Co., owned and operated by native New Orleanian Justin LeBlanc, a chef who worked in the kitchen at Peristyle. With a name like Bevi Seafood Co., you’d likely expect me to wax poetic about their quality Louisiana-sourced seafood po-boys, but the sandwich that really has me all aflutter is their Messi Swine, piled high with crispy pork belly, cochon de lait (smoked suckling pig), Chisesi ham and bacon fat mayonnaise.

With succulent sandwiches like these available nowadays, we can’t wait to see what the chefs create at the 2015 Oak Street Po-Boy Festival.

Long before the rise of social media (or even the internet), people were making baked goods in their own kitchens for sale to the public. Though laws vary from state-to-state, Louisiana's Cottage Food Act (enacted in 2013 and amended in 2014) allows residents to sell specific,... 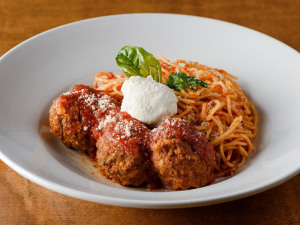 $20 and Under: A Cozy Dish: Spaghetti & Meatballs

Italians have a long and storied history in our city. In fact, during the late 19th century, just after the Civil War, there was a huge influx of Sicilian immigrants. It was an emigration so large (an estimated 290,000 individuals) that at one point the French Quarter was unofficially dubbed "Little Palermo." Though the population isn't as concentrated as it was over a century ago, the Italian influence can still be heavily felt throughout...

$20 and Under: And Now for Something a Little Different

When you think about the typical morning meal, what springs to mind? Is it bacon and sunny-side-up eggs with toast? Fruit-topped waffles drowning in maple syrup? A bagel and cream cheese or a bowl of hot oatmeal sprinkled with cinnamon and brown sugar? We all have a certain dish in mind when it comes to breakfast. In the United States, breakfast often means flocking to places like Waffle House or IHOP, making a drive-thru run for a Sausage...