For teeth reasons, cheese should be considered a dessert. According to The Guardian, eating cheese after a meal is "one of the best and easiest ways to combat acid erosion in your teeth." This is because cheese is an alkaline food. Alkali neutralizes corrosive acids (which sweets are loaded with). Cheese is the ideal dessert—it's chemistry.

Not all cheeses are created equal on the pH scale. Soft cheeses—like feta and brie—are not as high in alkali as cheddar, the alkaline champion. Cheddar should be the new trendy dessert. We're joking, but the science is for real. Science Daily notes that studies suggest that cheese helps prevent cavities more than other dairy products, like milk or sugar-free yogurt. This may be because you chew it, thereby increasing saliva production which is "the mouth's natural way to maintain a baseline acidity level." Cheese is the ideal dessert—it's biology!

Photographers tell people to "say cheese" before snapping a picture because, while saying the word "cheese," your mouth forms a sort of smile. The link between cheese and dental health gives another layer of meaning to the phrase that basically means "show your pearly whites." As if you needed a reason to love cheese any more than you already do. Here are five amazing local places to get your cheese.

St. James Cheese Co. is an elegant shop with an extensive selection and knowledgeable cheesemongers who will happily guide you through their robust world. Not only that, but this place is one step ahead of us in the idea of making cheese a sophisticated dessert air. They've managed to create tiered cakes made out of artisan cheeses. The "Southern Collection" cheese cake (not to be confused with cheesecake) is built of five layers of stacked cheese wheels, with names such as Snow Camp, Green Hill, Dancing Fern, Thomasville Tomme, and Appalachian Cheese. The way St. James talks about cheese waxes poetic, using descriptors including "lush cream-like and butter flavors" and "floral notes, herbaceous overtones, and a clean citrus finish." 5004 Prytania St., (504) 899-4737, stjamescheese.com

When you walk under the green, white, and red awning with the boot of Italy front and center, you know you're headed into a grocery that knows what they're doing. Nor Joe's in Metairie is that place. Behold their barrels of cheeses before going to the counter to order slices of classics that include mozzarella, provolone, and Swiss by the pound. Be sure to try some of their specialty options, such as spiced cheese spreads. 505 Frisco Ave., Metairie, (504) 833-9240, facebook.com/norjoeimport

Before Alberto's Cheese & Wine Bistro was a French Market treasure, Chef Juan Hernandez was sharpening his culinary skills in Madrid. There, he worked with companies that catered to big-name stars and members of the Spanish royal family. From crumbles on salads to a five-cheese plate, Chef Hernandez pairs wide-ranging flavors, textures, and forms of cheese, including asiago, feta, provolone, Swiss, American, fresh mozzarella, cheddar, goat cheese, and gruyere with the freshest Mediterranean ingredients. 1100 N. Peters St., Bay #11, (504) 522-0507, albertoscheeseandwine.com

Where there's wine, there's cheese. Bacchanal has hundreds of wines, but what we're really zooming in on is their Three-Cheese Plate, which comes with a French Brie du Pommier, a Spanish La Peral Blue, and a Point Reyes Toma from California. Call in for a yard-dining reservation or order online for takeout. 600 Poland Ave., (504) 948-9111, bacchanalwine.com

Following the trail of vino brings us to Keife & Co. Don't be fooled by the modest square footage here; this expansively curated shop is stocked floor-to-ceiling with wine, spirits, and specialty foods. Keife & Co. has a focus on "products of integrity and limited availability." If you call in with your budget and special requests, their experts will curate a platter of your dreams with meats, cheeses, accouterments, and spreads. Social gatherings might be on hold for now, but definitely keep their cheese and charcuterie boards in mind for when they return. In the meantime, visit the cheese counter. Consider it "research" for your future platter. 801 Howard Ave., (504) 523-7272, keifeandco.com

Photo by Jez Timms on Unsplash

This year, National Girl Scout Cookie Day will be held on March 12. The significance of this day is to celebrate the Girl Scouts of the United States of America, which came into fruition in the early 1900s by Juliette Gordon Low, who came up with an exceptional idea for an...

This year, you can escape the seclusion of the COVID-19 pandemic and join the New Orleans Citizen Diplomacy Council's World Explorer Club to feast on cuisines from around the world in the comfort of your own home. This club was birthed to create a platform for New Orleans based immigrant chefs to showcase their remarkable culinary work while helping them raise much needed funds during the pandemic. On Friday, February 26, the World... 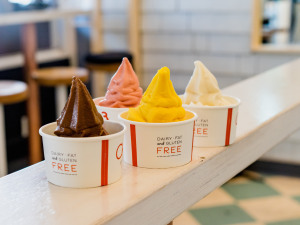 America's history of fro-yo is laden with lawsuits, ruthless competition, and punning store names. Pound for pound, frozen yogurt tops the scales as the sensational national dessert saga. First introduced in the '70s as the health-conscious fraternal twin of ice cream, frozen yogurt had drips and drabs in its popularity. When fro-yo reappeared in the '00s, it was on track for world...