The Kimpton Hotel Fontenot lies at the corner of Tchoupitoulas and Poydras Streets where a Staybride Suites once stood, and it has ushered in a new era of luxury and local flavor. The Kimpton Hotel Fontenot actually opened just before the pandemic began, then it was shuttered for months as travel was heavily restricted. This second grand opening was a testament to the resilient spirit of the city. Students from The Roots of Music played our way in, and the youth music program was gifted $5,000 for their services.

The character-studded event saw ladies from The Organ Grinders marching krewe, drag queens, and even Saints superfan Whistle Monsta mingling with the crowd, who were so busy marveling at the beauty of the hotel that they barely noticed these local fixtures. The event was given a glorious soundtrack thanks to Robin Barnes and her band, who will be performing at the Peacock Room weekly. Speaking of the Peacock Room, I have hardly seen anything like it! The beautiful blue lounge was full of vibrant murals, plush furniture, and even a gold ceiling. This room will be talked about for decades, like the lounges of yore that people spent very precious moments in.

The clean and crisp, yet artfully local hotel is a marvel, and it's not even done yet. The team behind Kimpton Hotel Fontenot is so intrigued by this place that they've purchased the historic building next door, which will host even more guest rooms, eateries, and more. You can learn more about Kimpton Hotel Fontenot here.

SoBou has been a staple of the high-end French Quarter culinary scene for over a decade, and it has endured several changes in that time. From the addition of burlesque dancers for brunch and adapting to the mandates enacted for the COVID pandemic, SoBou is standing the test of... 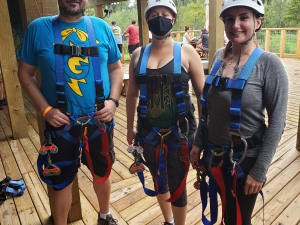 Zip NOLA Is Fun For Every Age

Louisiana is called the Sportman's Paradise because of the unparalleled outdoor activities you can indulge in, but most of those namesake sports involve hunting or fishing. For those looking for something more passive, but just as thrilling, you should certainly check out the newly-opened Zip NOLA located just outside of the metro area in Laplace at 301 Peavine Rd. Zip NOLA opened its lines in late July after several years of planning,... 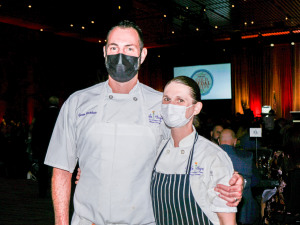 Everyone was a winner at the Louisiana Hospitality Foundation's 10th Annual Gold Medal Chefs Gala and Hospitality Awards. Attendees were treated to a tantalizing five-course meal, each created by a renowned local chef as standout citizens, entrepreneurs, and restaurateurs were recognized for their contributions to the community. Chefs Lennon Fitzgerald and Garin Siekkinen of Cafe Hope began the meal with a light, delicious Creole...