On Sunday, June 28, the all-day livestream marathon and virtual music festival Justice Comes Alive will let you tune in to live performances while you donate to a good cause. In order to secure a spot and participate, fans must donate to Justice Comes Alive in partnership with the PLUS1 for Black Lives Fund, to give proceeds to participating artists as well as organizations like Equal Justice Initiative, Impact Justice, and The Bail Project, and other black- and indigenous-led grassroots organizations combatting racism.

The livestream will include new live performances from 50+ artists specifically for Justice Comes Alive, including musicians like Big Sam's Funky Nation, Christone "KINGFISH" Ingram, Tank and the Bangas, Ivan Neville, and more. Performances will range from social distant studio sessions to remote video collaborations to crowd-less sets at different venues across the country.

Justice Comes Alive also follows the inaugural Quarantine Comes Alive Event, which benefited artists and PLUS1's COVID-Relief Fund, raising over $170,000. The event creators felt inspired and empowered to put on a similar event that focuses on issues of racial inequality that we are facing as a nation.

"Waking up the morning after Quarantine Comes Alive was bittersweet," Kunj Shah, president and founder of Live for Live Music and producer of Justice Comes Alive, said. "On one hand, we raised a lot of money for some incredible causes, which will be helping a ton of people for years to come. But on the other hand, the world was finally waking up to racial inequality in our justice system and everyday lives."

In the wake of a wave of national protests calling attention to police brutality and racial injustice, along with the seven days of protests in New Orleans, this virtual event aims to use the music community to raise money and awareness for organizations empowering black communities, keeping people out of the criminal justice system, and working to dismantle systemic racism in our society.

"I felt a responsibility to use our resources and platform once more, to create an experience where people can enjoy music while helping those in need and educating themselves on the current issues facing our society today, with the help of the black musicians who make up this beautiful community," Shah said.

For more information, go to justicecomesalive.com.

Listen to This!: New Music You Have to Hear

Let's face it, music has most likely been your best friend during the past few months in quarantine. Whether you are cooking, taking a shower, working out, or just having a dance party on your own, you are probably tired of streaming the same...

New Orleans Musicians Band Together to Save the Music Industry

"As I'm sure you know, music is the gift that Louisiana gave the world," said Grammy-winner Dee Dee Bridgewater. A video that she was a part of called on Congress to support the immediate passage of the RESTART Act. This act would provide small and medium-sized businesses, including music venues, with cashflow to help compensate for the fall in their revenue caused by COVID-19. The act is part of... 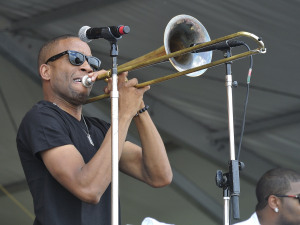 The downturn in tourism has made the streets of New Orleans awfully quiet for the past few months, so if you're looking for a way to get that NOLA music back in your life, we know just the thing. Since last Tuesday, July 21, Tipitina's has been auctioning off two pieces of New Orleans funk memorabilia, both of which would brighten up any home. Up for grabs are an original drumhead signed by The...