How Jazz Fest Came To Be

It all started in 1970. At that time, the now-massive two-week-long music festival was just an idea being discussed among several city and business leaders who wanted to start something that could attract tourists each and every year. Small jazz-centric festivals had been held throughout the 1960s, but the people who were talking about a larger festival wanted something that could rival the massive (and sometimes infamous) music fests happening around the country. Not only did they want to make an impressive jazz-themed festival to draw attention to the city, but they also wanted to showcase the legendary local musicians who were making that world-famous music.

Beginning in the early 1960s, Mayor Victor H. Schiro, a member of the Chamber of Commerce, and others wanted to make a larger fest. They called upon the well-known large-scale fest producer George Wein to produce this new festival, due to his expertise with other jazz festivals, including the Newport Jazz Festival and the Newport Folk Festival in Rhode Island, which he founded in the 1950s. However, laws were in place that prevented people of different races from assembling with each other, which made such a festival impossible to create.

Several attempts were made over the years to start a large jazz festival, but it wasn’t until the New Orleans Hotel Motel Association formed the New Orleans Jazz & Heritage Foundation in 1970 to oversee the creation of such a festival that it became a reality. The foundation’s board finally officially hired Wein, and he hit the ground running.

Wein immediately began assembling a team to make this festival come to life. He sought the input of local musicians during the creation of the inaugural fest, and he asked Ellis Marsalis, Dick Allen, and Harry Souchon to come on board. Richard “Dick” Allen was the curator of the Hogan Jazz Archives at Tulane University at the time, and he recommended that Wein include Allison Miner and Quint Davis, an employee and an intern at the Jazz Archive, respectively, to help out with the fest, because of their deep love of New Orleans music.

Miner and Davis were hired on and were tasked with hiring bands to perform at the fest. Knowing so much about jazz music and New Orleans culture, they went to smaller neighborhood clubs to seek out bands, rather than just going to the most popular venues of the day. They didn’t bother asking the musicians to sign any contracts, asking them instead just to show up, come in, and start playing at a certain time.

In an interview with New Orleans Magazine in 1994, Davis explained how they booked bands, saying, “The music scene in New Orleans was mainly Bourbon Street and disco. To book the music for the first festival, we went to the only places that live music was really happening: the black clubs. We went to the Night Cap Lounge on Louisiana Avenue and the Off Limits, where Willie Tee and Earl Turbinton played. We had no contracts, just our voices and ourselves. We would go and hang out, drink a beer, dance, talk to people, and just be friends. That has always been one of the secrets of the success of the festival. From the beginning, it has always been about people—not money or tremendous crowds or national acclaim—but wonderful people whom I've always been proud to call my friends. 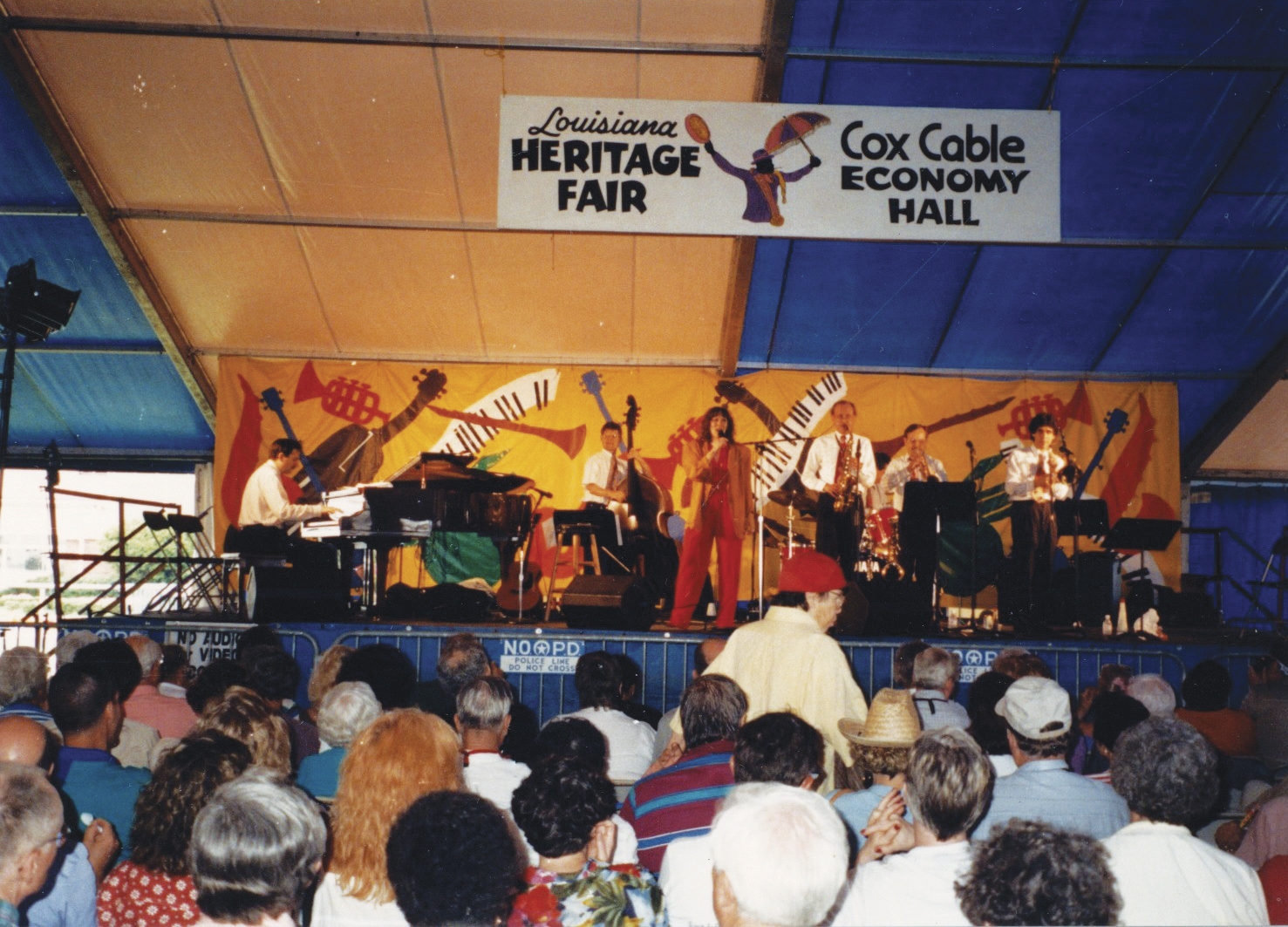 “We did our fieldwork by telephone, and unfortunately, I didn't have one. We would go to All Good's Restaurant across from Touro Infirmary and use their pay phone to make our calls. I remember calling Snooks Eaglin at his mother-in-law's house. Dick Allen had given us the number. Snooks was the first person we booked for the festival. At that time, he was a street singer. He didn't play in any clubs, just for neighborhood groups and churches. Snooks played at the first festival and has played at every festival since. Another musician who came on board at the very beginning and has played every year since is Clancy ("Blues Boy") Lewis. He was at the Triangle Lounge in Gert Town, and he was fantastic.” Despite the humble manner of the production, the lineup included such names as the Preservation Hall Jazz Band, Duke Ellington, Pete Fountain, Al Hirt, Clifton Chenier, Fats Domino, and The Meters.

It cost attendees $3 to get in, and the festival had music on only five small stages. There were about 350 people who showed up, some of whom were lured there by the Eureka Brass Band, which paraded down Basin Street from Canal Street to lead people to the under-advertised event. Any musicians who needed somewhere to stay were given space at the homes of Miner and Davis because the festival didn’t have money to spare for hotel rooms.

Mahalia Jackson famously performed at the festival, but she was not scheduled to be there at that time. She was scheduled to perform at the Municipal Auditorium later in the evening, but she surprisingly showed up during the daytime to enjoy the festival’s acts. She came upon the Eureka Brass Band parading around, and she began to sing along with them, purse in arm. George Wein saw her and handed her a microphone so that everyone could hear the impromptu concert. This, he later recalled, was the spirit of Jazz Fest.

The festival spent its second year in the Louis Armstrong Park, but moved to the New Orleans Fair Grounds in 1972. By 1975, there were 80,000 attendees, and by 1978, Jazz Fest took place over two weekends. The festival has now grown to employ thousands of musicians, volunteers, seasonal staff, and year-round employees. It brings in hundreds of thousands of attendees and numerous food and art vendors. All of the action takes place on 14 music, interview, and cooking stages.

Miner and Davis went on to oversee operations of the festival for many years. Quint Davis now holds the title of producer and director of the fest and CEO of Festival Productions, Inc. Miner helped to begin and curate the New Orleans Jazz & Heritage Foundation Archive, which owns the recordings of interviews with musicians done at the Allison Miner Music Heritage Stage at the festival each year, among other assets. Miner passed away on December 23, 1995.

The mission of the New Orleans Jazz & Heritage Foundation is “to promote, preserve, perpetuate and encourage the music, arts, culture, and heritage of communities in Louisiana through festivals, programs, and other cultural, educational, civic, and economic activities.” Not only does the foundation produce Jazz Fest, it also operates WWOZ-FM; several educational programs, including the Don “Moose” Jamison Heritage School of Music; multiple economic development programs, such as the Sync Up Conference and the Jazz & Heritage Film Festival; and more festivals, including the Crescent City Blues & BBQ Festival, the Treme Creole Gumbo Festival, the Louisiana Cajun-Zydeco Festival, and the Congo Square New World Rhythms Festival.

The New Orleans Jazz & Heritage Festival and Foundation are so much more than a musical experience that happens a few days every year. They are keeping our culture’s flame burning brightly for the entire world to see, appreciate, and admire.

For professional woodworker Greg Arceneaux, money really does grow on trees. Don't you dare call Greg Arceneaux a tree-hugger. That term has negative connotations. Besides, Arceneaux doesn't drive a Prius, and he doesn't compost. No, he's more of a tree...

Gallup News has released the results of a study of Americans' mask usage, which has been being conducted since early spring. It is no surprise that only 44 percent of Americans "always" wear a mask, and 14 percent "never" wear a mask while outside their homes. "While majorities of women (54 percent), Democrats (61 percent), Northeasterners (54 percent), and those with annual household incomes under $36,000 (51...