Hopping Down the 10k Bunny Trail With the Crescent City Classic

Easter in New Orleans means several things: It means parades (including the French Quarter, Chris Owens, and Gay parades), a big Easter egg hunt in City Park, and brunch. It involves overdosing on chocolate and putting on funny pastel-colored hats. Easter means that Mardi Gras is now 40 days behind you, and that you can finally have a burger again. And, perhaps most importantly, it means that it’s Crescent City Classic weekend! 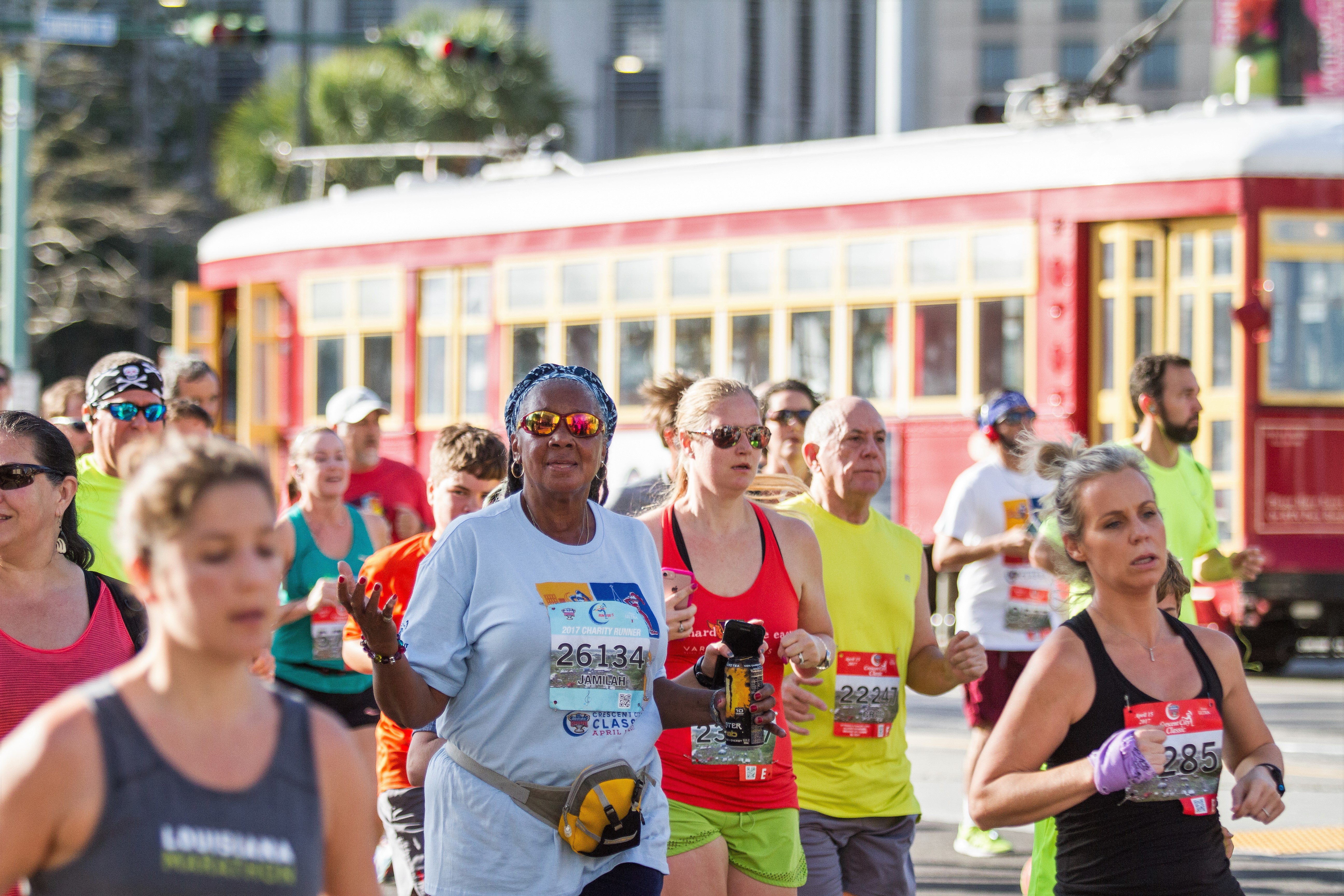 Held the Saturday before Easter every year, the Allstate Sugar Bowl Crescent City Classic (CCC) is probably the best-known 10k race around. It’s also the largest road race in the country, when thousands of people come out to run or walk 6.2 miles and enjoy a little red beans and rice, Michelob Ultra, and live entertainment together afterwards. The CCC began in 1979 with just 979 runners and now brings in between 30,000 and 35,000 participants every year, from all 50 states and 18 different countries—some come from as far away as Africa, Russia, and New Zealand. This year is the 41st consecutive year of the race. 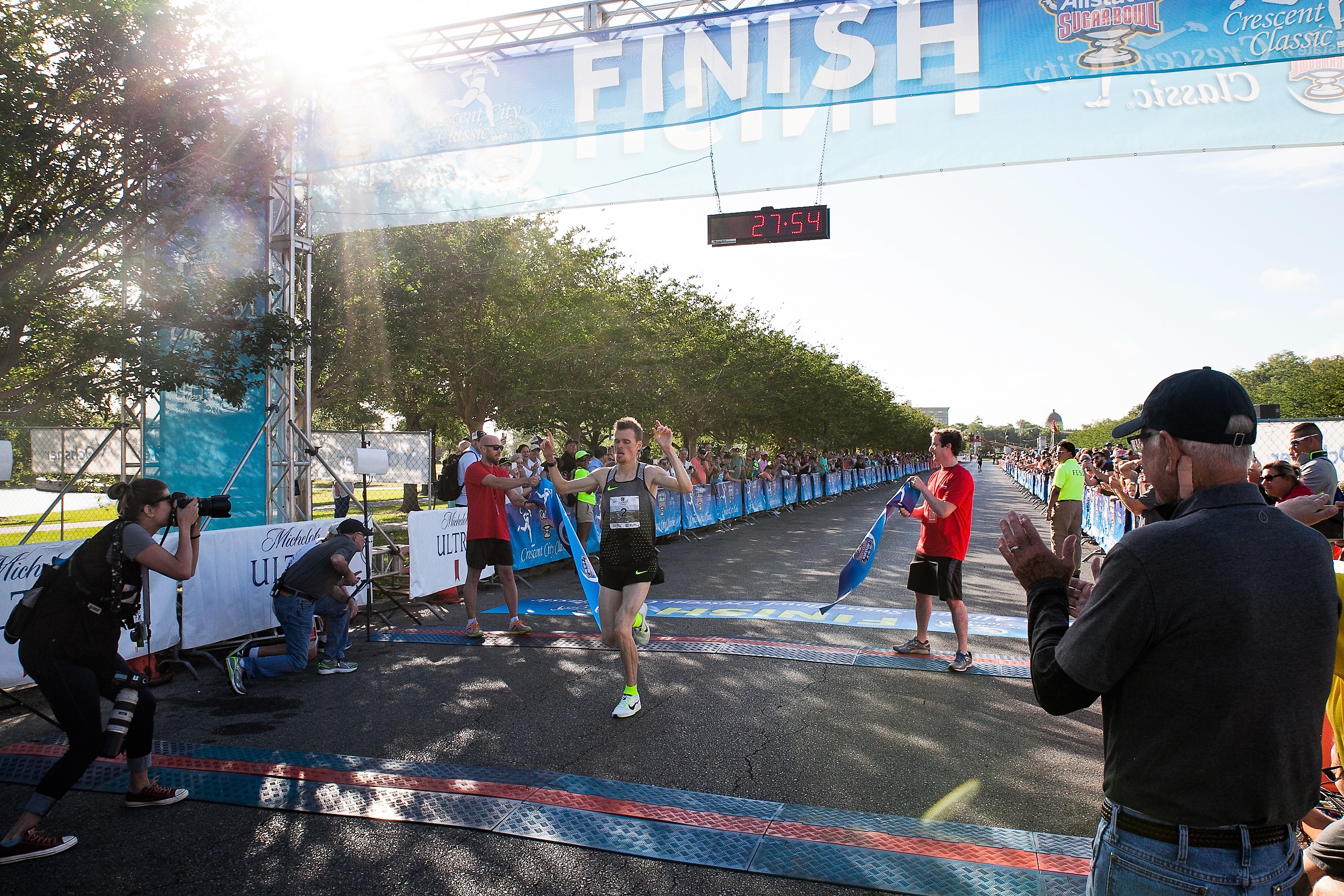 The planning and execution of a race of this magnitude is almost as exhausting and difficult as actually running the 10k. Uphill. Carrying a dozen six-packs of Michelob Ultra. But it’s equally as rewarding. Says Eric Stuart, the Allstate Sugar Bowl Crescent City Classic Race Director, “The organization and coordination take months of planning. Add in four separate security forces, a medical staff of over 50, New Orleans EMS, [getting permits], insurance, and a volunteer staff of over 100. It is a year-round endeavor!”

All of the 10k finishers walk away with a sense of accomplishment, some cool race bling, and a calorie deficit that can quickly be neutralized by the refreshments provided at the post-race party. And in addition to a hearty supply of beer and jambalaya, participants also get a spiffy race t-shirt and a fancy medal, both of which incorporate the design of the 10k race course this year (which starts at the Superdome, winds through the French Quarter, and finishes in City Park). And the t-shirt, which has customarily been white cotton, has now been upgraded to a fancier gray poly-blend shirt. “It has a softer feel, and we think our participants will be very happy with the color and material,” says Crescent City Classic Event Manager Kristen Stuart. “It will definitely be one that people will want to add to their CCC 10k collection!” 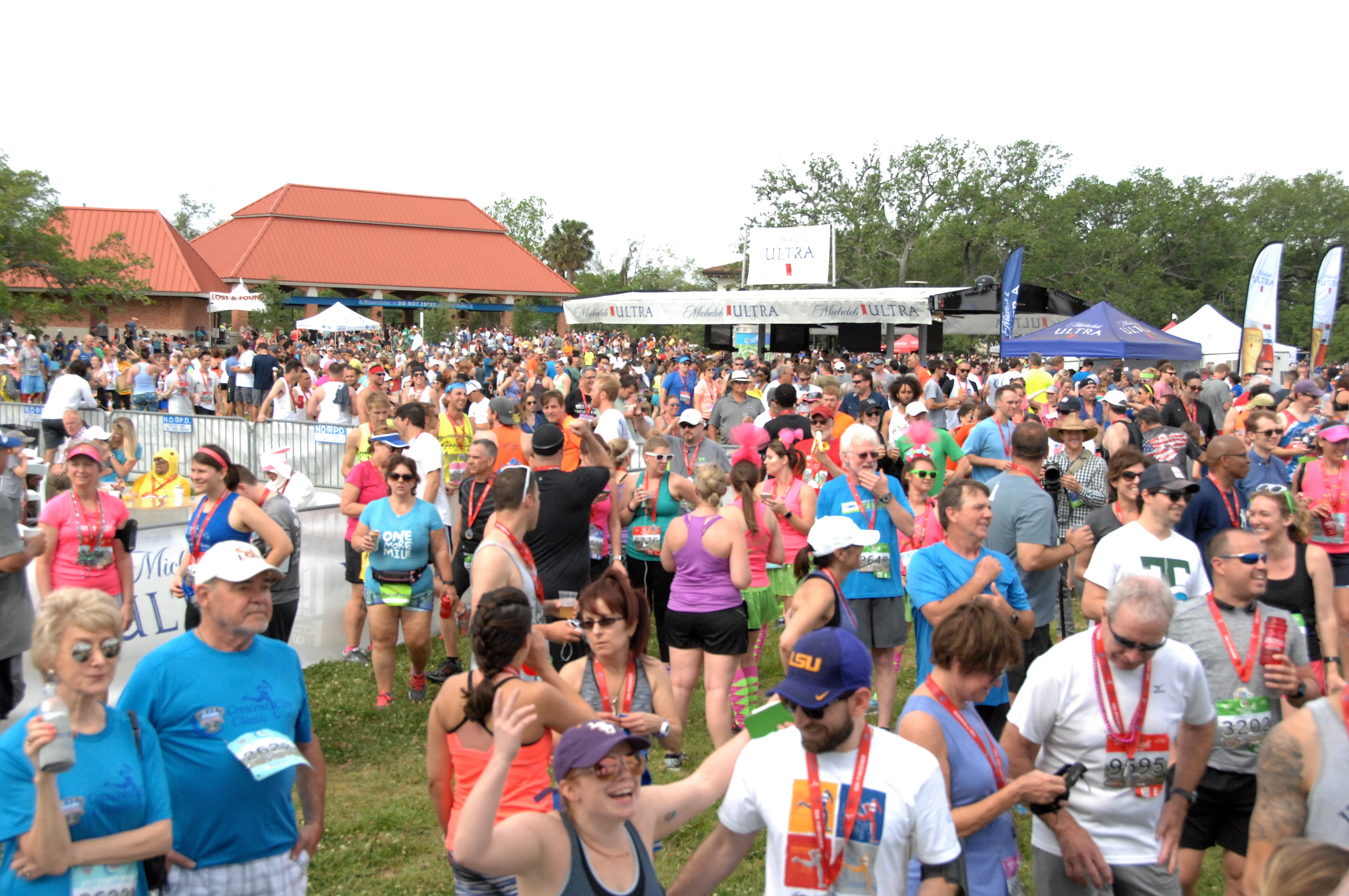 And perhaps the best award of all, next to the sheer glory of having finished a 10k race: The top 500 finishers—both male and female—win a copy of the official race poster. The poster changes every year and is always a masterpiece done by a local artist. This year’s version is by Matt Rinard, and it features a whole slew of white Easter bunnies lined up at the start of the race. Rinard calls his design whimsical, and says the rabbit theme was inspired by the story of the tortoise and the hare. “I just wanted an image that would portray the fun and the organized chaos of the race,” Rinard says. “This portrays how seriously some people take it and how others are towing a beer keg in a tutu the whole route.” As a runner himself and a Crescent City Classic finisher multiple times (with a quick-like-a-bunny PR time of 34:34!), he says he can really appreciate the difficulty of doing this race. “A 10k is such a different animal from a 5k,” he says. “It’s tough—tough, like a bunny.” 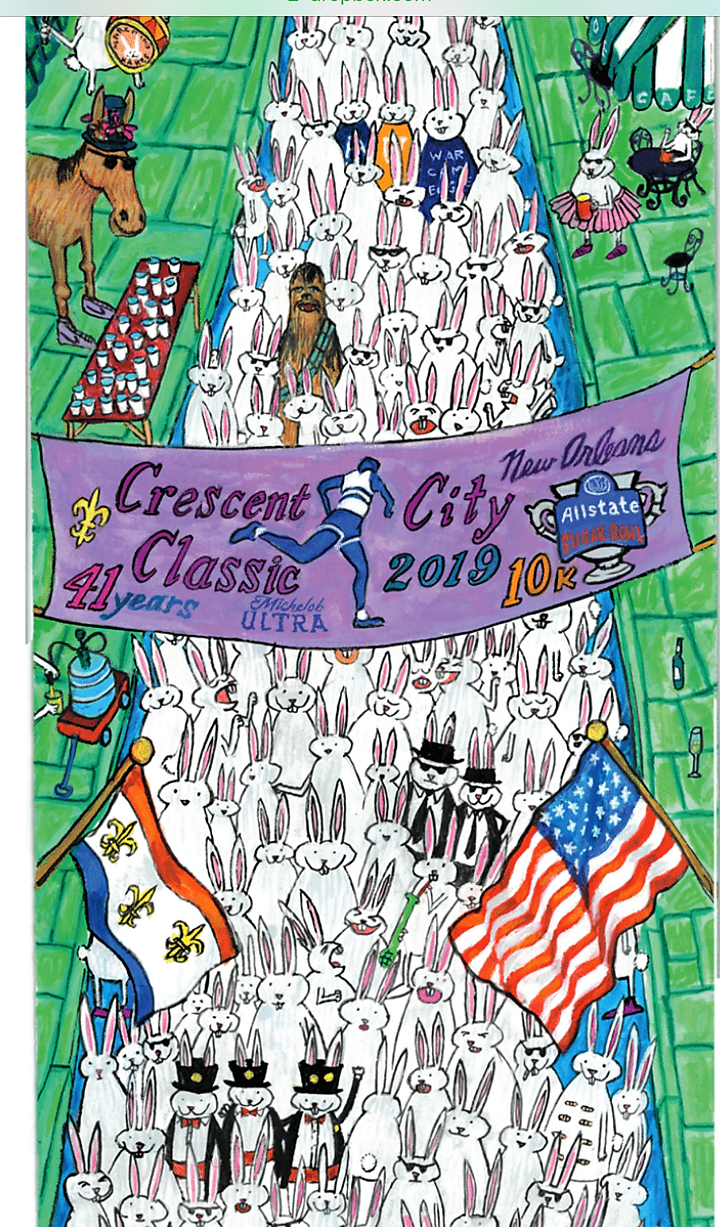 Rinard’s bunnies are quick, tough, and amusing, and are available for purchase online. So, even if you don’t hop along fast enough to be among the top 500 finishers, you can still get yourself a copy of the poster—including one that’s signed, numbered, or comes with an artist-produced “doodle” on it known as a remarque.

Running the Crescent City Classic 10k is not just good for your health, it’s also good for the community. The race raises lots of money for charity every year through participant fundraising. “We’re very proud that our fundraising through the Run For It Program grows each year, with last year exceeding over $1 million,” says Kristen. She explains that the organization is careful about where their donations end up, with the stipulation that all the money must stay within the Greater New Orleans area. That money is being put to good use yet again this year, with 24 different local charities receiving a portion of the funds. Along with the sheer joy of the giving spirit, charity runners and walkers also have the added bonus of getting to start the race toward the front of the pack. 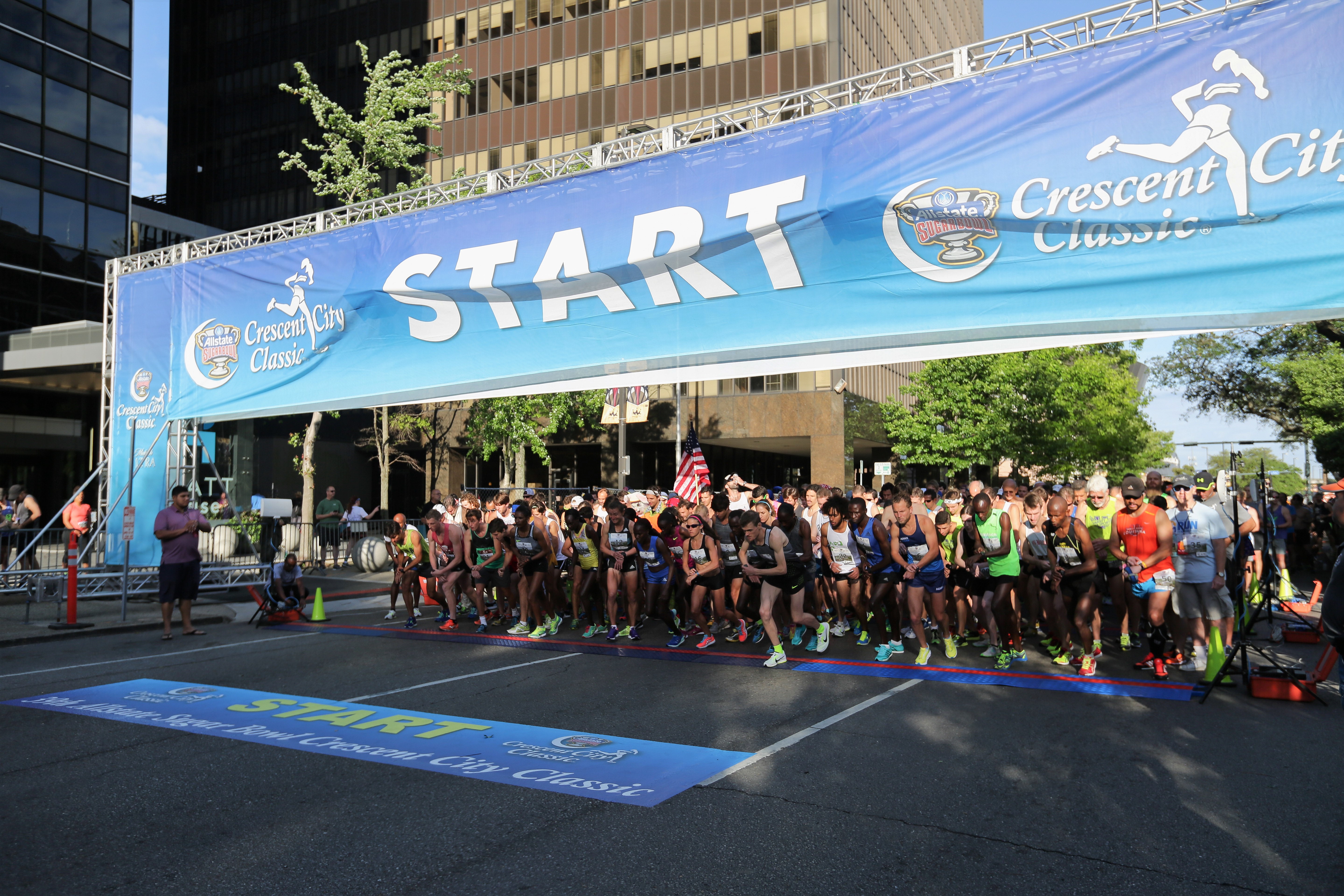 Jerry Lenfant and Wade Bolotte have run the Crescent City Classic all 40 years of its existence so far. Together, they call themselves the CCC Blues Brothers, and each year, they run in full Blues Brothers garb. “[We] wear our black suits, white shirts, black hat and tie, sunglasses, and briefcase,” explains Lenfant. “Oh yeah, and black shorts.” When asked if they’ve done any fundraising for the event, Lenfant responded that they haven’t because they used all their money for bail.

The Crescent City Classic Blues Brothers are devoted to this race, and have a great time running and enjoying a big party after a good run. In fact, they’re such a CCC fixture that Rinard even featured them in his poster. They’re signed up to run their 41st race this year and have no intention of stopping any time soon. “We can’t break our streak,” says Lenfant, “40 in a row and shooting for 50 in a row!” 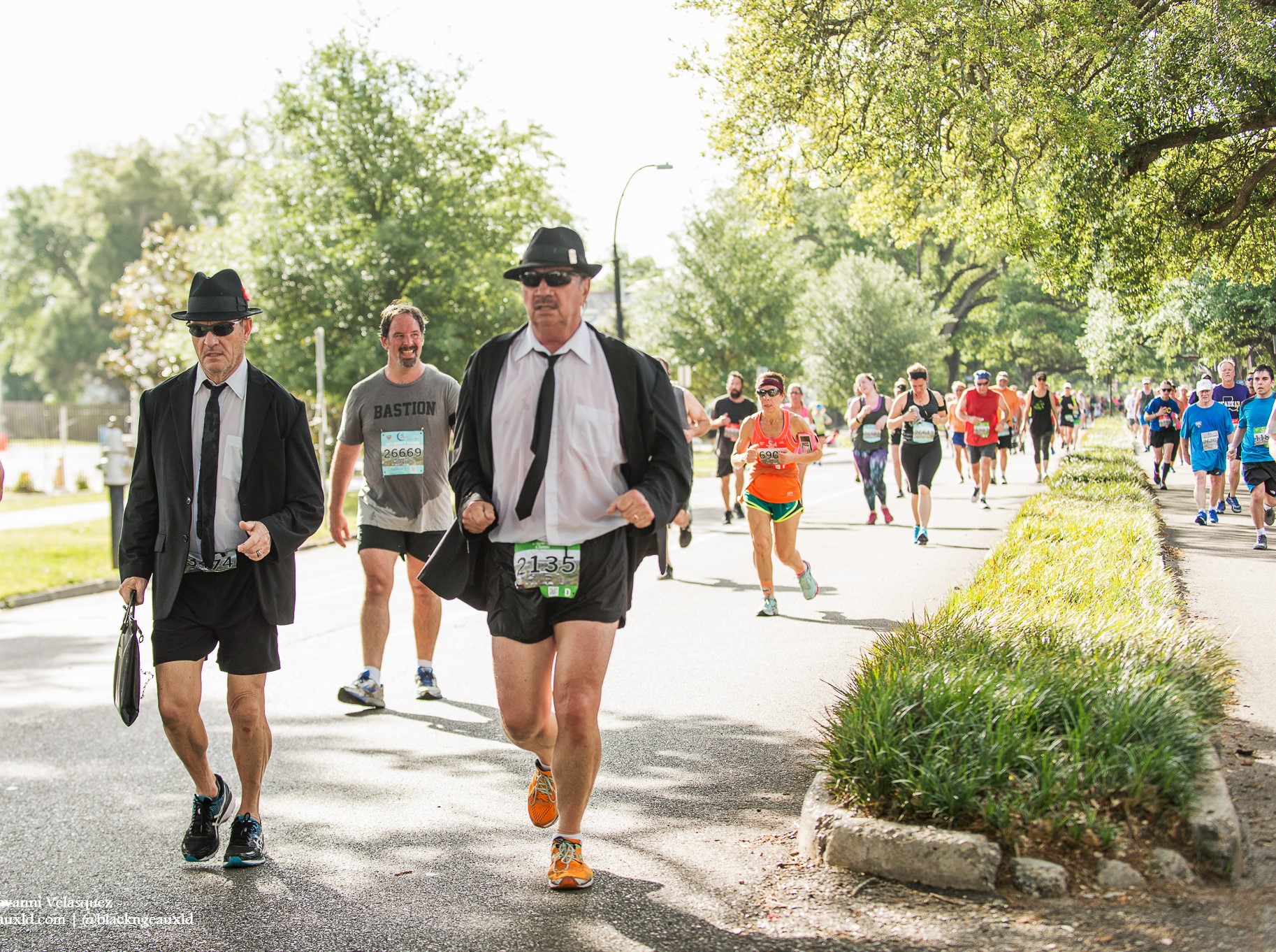 There are so many reasons to take part in the annual Crescent City Classic 10k run, whether it’s for the runner’s high, the live music at the after-party, or the beer, whether it’s to raise money for a good cause, to enjoy a nice spring run through town, or to get in a good workout before stuffing your face with jelly beans and Cadbury Eggs. But whatever it is that motivates you to sign up, this race is guaranteed to be a good time. The more than 30,000 people who come out for it annually must be on to something. 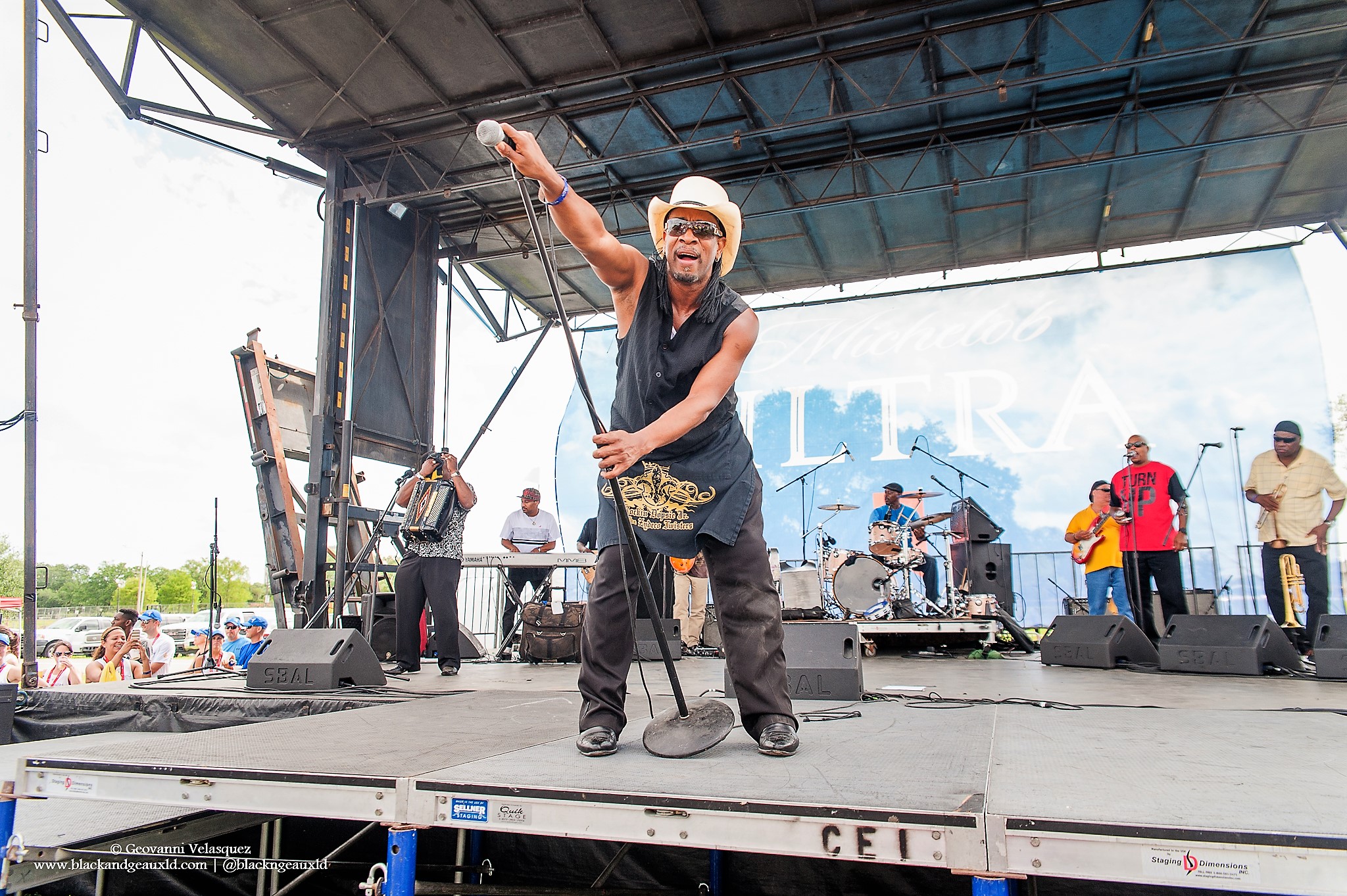 So, what is it that makes the Crescent City Classic so endlessly appealing? Eric says that some people call the CCC “the original party race.” “I’ve traveled to races all over the U.S. and our afterparty—thanks to Michelob Ultra—is far and away in another stratosphere. Additionally, the fact that New Orleans is below sea level makes for a flat, fast course that runners and walkers can thrive on,” he says. “And the fact that it’s in New Orleans doesn’t hurt, either!”

The Crescent City Classic will be held on Saturday, April 20, at 8 a.m. For more information or to sign up for the race, go to ccc10k.com/crescent-city-classic-10k. 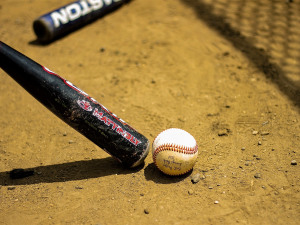 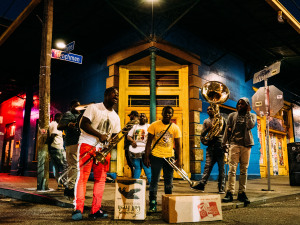