God Save the King Cake: Six Places to Get Yours This Season

Mardi Gras parades may be cancelled this year, but king cake lives on! Here are six places to get a cake that's fit for a king.

According to song, on the 12th day of Christmas, true love is to send 12 drummers drumming. Well, Twelfth Night has officially arrived. Those drummers are notably abstaining in the ongoing effort to contain the spread of COVID-19—but local bakers are making sure that king cake is here for us. The traditional dessert is roughly 300 years old (possibly reaching as far back as ancient Rome) and much improved from the early days of dry bread sprinkled with sugar. Today's king cakes are works of pastry arts, a tribute to history, and a cultural must-have in the city of New Orleans. So much of this Mardi Gras season will be different, but king cake will still taste as sweet.

Haydel's is the reigning king of king cakes, or at least the Guinness World Record holder for world's largest king cake. In 2010, Haydel's broke a Houston bakery's record with a 3,007-pound king cake that wrapped around the inside of the Superdome. Next, they immediately shattered that king-sized record with a second, 4,073-pound king cake that circled the outside of the Dome. Taste a slice of history in the form of delicious Danish dough and fondant icing. If you aren't one for icing, a sugar-only option is available. Should you land on the other side of that controversial divide, Haydel's has filled king cakes if you believe that cake is mostly just a vehicle for frosting. 3117 Magazine St., (504)267-3165; 4037 Jefferson Hwy., (504)837-0190, haydelsbakery.com

Sucré is back under new ownership with all your old favorite desserts. The très chic boutique bakery closed in 2019, one year after The Times-Picayune reported on several employees raising internal complaints of sexual misconduct against Sucré co-founder Tariq Hanna. The local MeToo story revealed an unsavory side to the storybook-esque sweets shop. Sucré went dark for a year and a half, until December 2020, when Ayesha Motwani revitalized the original Magazine Street location. Onboard for this new chapter is Sucré's previous executive pastry chef, Ashley McMillan, who told Fox8 that Sucré's closing came as a shock; her post there had been her "forever plan." McMillan is bringing back all her perfected confections, macarons, and hand-spun gelato—including the shimmering, sugary king cake. It tastes as spectacular as it looks on your Instagram. 3025 Magazine St., (504) 354-9635, shopsucre.com

In Old Metairie, an Italian deli is disrupting the king cake world with its innovative ideas. Nor Joe's Cannoli King Cake with creamy cannoli filling is the hybrid dessert you never knew you needed. While you're there, pick up a Nor-Joe muffaletta to balance out your palate. That is how it works, right? 505 Frisco Ave., (504)833-9240, facebook.com/norjoeimport

For fans of flavored king cake, Caluda's Bakery is the answer. Savor every week of Mardi Gras season with a rotating specialty flavor—think maple bacon praline or Bananas Foster. The bakery is based in Harahan, but there's no need to travel to get a fix for your sweet tooth since Caluda's traditional king cakes are available at PJ's Coffee locations throughout the New Orleans area. Order a whole cake for your own celebration and select the "Parade KIT," which allows you to ice the cake yourself to your preference and comes with a king cake history card, baby, cup, beads, and doubloons. 1536 River Oaks Rd. W., (504) 218-5655, kingcakeshop.com

It's time to visit the Reginelli's near you because they have a different but delicious option on the table: King Cake Bread Pudding. In it, the dessert king falls in love with a commoner, and their marriage is divine. Wait, you don't come up with fairytale stories for your desserts? Maybe you'll have a myth to make for Reginelli's matching King Cake Cocktail after a drink or two. Or perhaps you'd rather enjoy your treats paired with a Cajun Crawfish Pizza and leave it at that. Good idea. Definitely don't want to start making up stories for those crawfish. Unless... 847 Harrison Ave., (504) 488-0133, reginellis.com 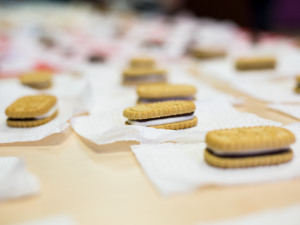 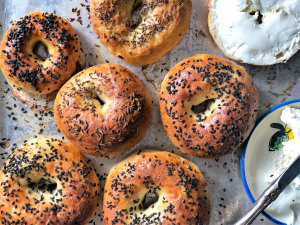