The new horror-comedy Freaky succeeds in the comic part of the equation, but stumbles in the horror part.

Vaughn is the star of the show. At 6'5", the actor is an imposing enough physical presence to be convincing as a fearsome killer, but he also has the comic chops to pull off the scenes where he's playing a teenage girl (the majority of the film). There are a number of funny gags where Millie has to get used to suddenly being over a foot taller than she's used to being.

While the comedy mostly works, the horror portions of the film mostly don't. Director Christopher Landon helmed Happy Death Day, a movie that more successfully merged humor and horror. However, Freaky isn't scary so much as it is extremely, extremely gory. The over-the-top ugliness of the murders clashes significantly with the light comedy of the rest of the film. It might have been better for Freaky to go Happy Death Day's PG-13 route.

That said, there are still things to enjoy here, especially for Vaughn fans. Freaky is playing at the Prytania Theatres at Canal Place, the Broad, AMC Elmwood, and AMC Clearview. 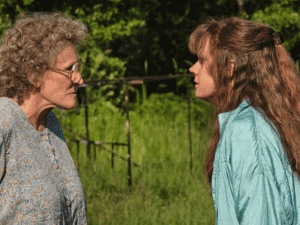 Based on J.D. Vance's bestselling memoir of the same name, director Ron Howard's Hillbilly Elegy clearly has Oscar aspirations, but falls short of reaching them. Vance (Gabriel Basso as an adult, Owen Asztalos as a child) is in Yale Law School interviewing with prestigious Washington, D.C., firms when his sister (Haley Bennett) calls to tell him that their mother (Amy Adams) is in a hospital after overdosing on heroin....